Weapon mods are improvements that can be attached to weapons in The Division. Each item in the game has a certain number of mod slots, which allow it to be upgraded several times. They come in different rarities, which determines the number and strength of the bonuses they provide. This guide will show you weapon mods in The Division, how they work and how to obtain them. 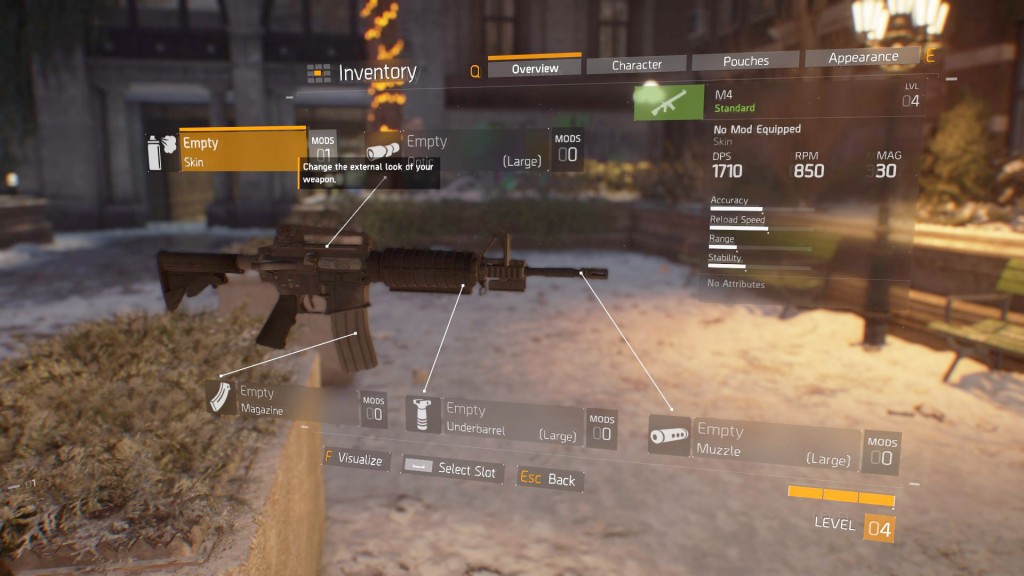 Weapon mods can either be found all over the city, bought from vendors or crafted using blueprints. There are five kinds of them:Not all weapons have slots for each of the mods – pistols can’t be enhanced with optics, while shotguns can’t be upgraded with custom muzzles.

Weapon skins are cosmetic mods that don’t have any stats. They don’t influence the game in any mechanical way – they’ll only change the way your weapon looks. They can be solid colors or patterns. You can get them from helping random civilians on the streets, doing quests or even as random drops.

Magazines can only be used on weapons that have a magazine mod slot. They come in various shapes and sizes, but their basic attributes are one of these three:

Underbarrels are grips that can be mounted under the weapon for better stability. A weapon has to have an underbarrel mod slot if you want to enhance it with one. Here are some of the bonuses we’ve seen these mods adding:

Optic mods are sights used to improve accuracy and the amount of zoom you can have on a weapon. Having an optics mod slot is essential if you want one on your weapon. The effects they have can be different:

If you’re looking to appear as less of a threat in PvE, muzzles are the way to go. They can only be attached to weapons with the muzzle mod slot, and in most cases, will make you look less threatening to mobs. The attributes we’ve seen on them so far are:This guide is a work in progress. We’ll update it with more information once the game is live.