Longest Three Hours is one of the main story quests in Dragon Ball Z Kakarot. It takes place early on, after your first fight against Nappa. Once you get it, you’re supposed to kill time as Gohan, waiting for Goku to return. A lot of folks are having trouble here, finding nothing to do and nowhere to go. If you’re stuck waiting for Goku in Longest Three Hours in DBZ Kakarot, this guide is going to help you get past the bug.

Stuck waiting for Goku as Gohan

After you defeat Nappa for the first time, you’ll get the quest called Longest Three Hours. In it, you’ll play as Gohan, and you’ll have to kill time while waiting for your dad to return from wherever it is he went. The trouble is, sometimes a bug prevents the quest marker from appearing. You’re supposed to go talk to your friends, but without the marker, you won’t have any idea where they are.

Luckily, they spawn in the correct place regardless of whether the marker is there or not. So you can just head on over to the spot, which is in the southeast of the Central Plains Area, and talk to them. This will push the story forward, and you’ll be stuck no more. 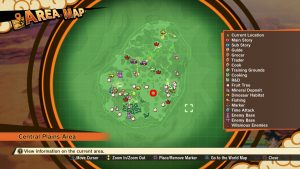 It seems like this is one of those bugs that is triggered when you turn off the game while on a quest – most reports come from people who stopped their play session before finding their friends and talking to them. No matter the reason, the solution is always the same – find them on your own, using the image provided above. It’s definitely one of the most benign bugs you could experience – others have had rare materials disappear, or dragon balls vanish into thin air.