You know the story. The artist releases an album that reaches the top of the charts, and now everyone expects something equally wondrous to happen with the follow-up. That same expectation weighs heavily on most game developers. Many have buckled under that kind of pressure. You either spawn the next big thing, or the world forgets about you.

Techland, a Polish game development studio and publisher, released several smaller games before Dead Island. It was the first game that got noticed by a wider audience, but their real breakthrough came with Dying Light. The first-person shooter, infused by the parkour movement, was very well received by gaming audiences. We’ve waited seven years for its sequel, that cursed “sophomore album”, and it’s finally here. 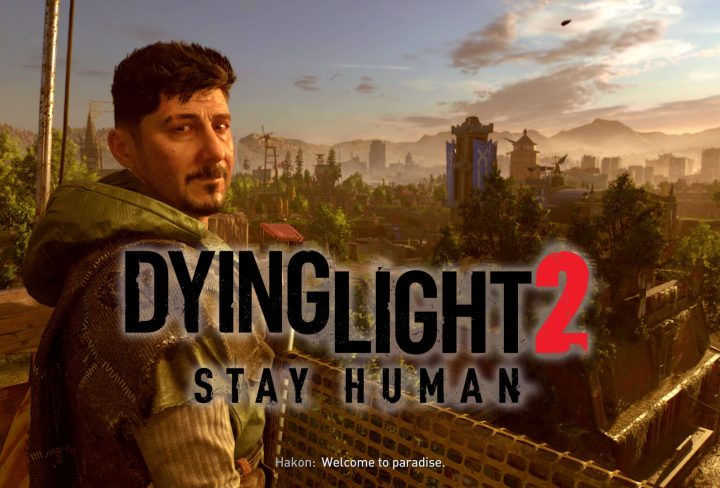 Dying Light 2 Stay Human is an open-world, first-person action game centered around surviving in the post-apocalyptic, zombie-infested world. What differentiates Dying Light from other similar titles is the parkour movement mechanics. You run, jump, slide and move both vertically as you do horizontally. Throw in some weapon customization, night and day cycles, and a vast world to explore, and you get a novel take on interactive zombie fiction.

Dying Light 2 Stay Human is an ambitious sequel that takes place in a new city, decades after the first game, and sets us up with a fresh story and characters and some familiar game mechanics.

Five Hundred Hours of Things to do in Villedor

You are a Pilgrim. One of the few zombie apocalypse survivors, venturing into the wild and roaming the infected world. After years of wandering and generally avoiding humanity, you finally arrive in Villedor. Your long-lost sister is said to have been there.

Dying Light 2 Stay Human takes place in a city brimming with content. It is much bigger than Harran, where the first game took place. Techland flaunted 500 hours as the number it will take to do absolutely everything in Villedor. The truth is that, although there’s a considerable number of things to do, akin to what you might see in an Assassin’s Creed game, it is far from being bloated. It will take 30-40 hours to complete the main story. Then, if you genuinely enjoy the experience and want more, you can start anew to discover more of the story or continue past the ending to explore the city itself and its many side quests. I think 100 hours is absolutely the maximum you’ll need, and everything beyond that is for the hardcore fans, achievement chasers, and co-op. 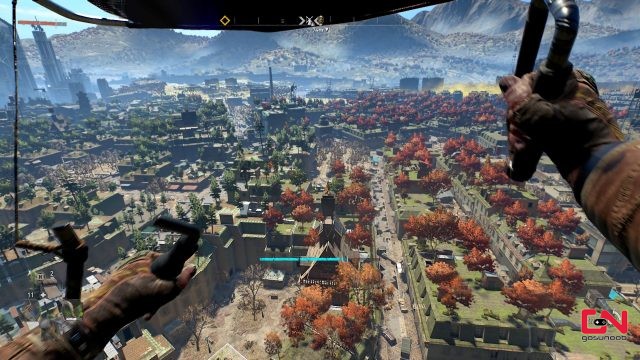 With open-world games, the design of the setting where they take place is as important as gameplay and story. Due to the parkour-infused gameplay, the vertical structure of Villedor is as essential as its horizontal component. Streets are full of infected, so the city “evolved” to be traversable over rooftops.

Each building, of which there are thousands, is a parkour-friendly playground with particular points of interest housing various valuable items, armor, weapons, or quests. Exploration aficionados will have a blast here.

Villedor’s verticality is what makes it so much fun, and combined with your parkour skills, it is what makes the game flow nicely. The first Dying Light brought parkour traversal to the FPS zombie genre and is still an exhilarating game mechanic. As you climb tall skyscrapers, trying to save survivors or get to rare loot, you are pretty much guaranteed to have the adrenaline rush as each of these are designed as mini platforming challenges.

This is further enhanced by nightfall, when more dangerous zombies come out. Alerting these will start a chase where the horde starts running after you, and the only way to escape is to outrun them and hide or die. It can be the best fun you had in a zombie game ever. 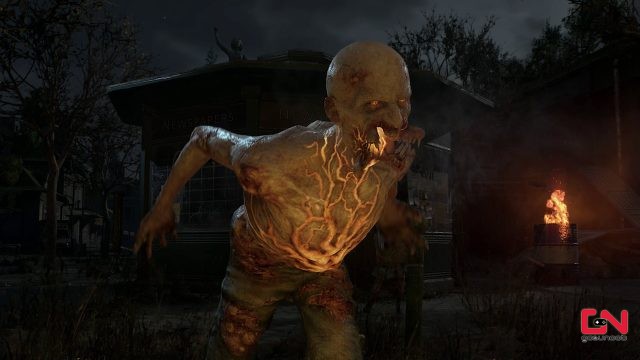 Another very similar thing is combat. You will be using various melee weapons to slash, bash and pulverize infected and human enemies. Except for the bow, which you’ll get about two-thirds into the game, there are no other ranged weapons. You’ll face your enemies in face-to-face combat more often than not. You might think that whacking zombies with a broken guitar neck will get old after doing it for 30 hours. It doesn’t. Techland managed to make it fresh all over again.

I must mention that both parkour and combat take some time to truly shine. In the first quarter of the game, you’ll feel clunky and less powerful than you were in the first game. As you progress and unlock more combat and parkour skills and Nightrunner gadgets, things will start falling into place, creating a demigod out of you. In the end, you’ll get a genuinely fantastic gameplay experience as you fly over obstacles, covering huge distances with the grace of a ballet dancer. 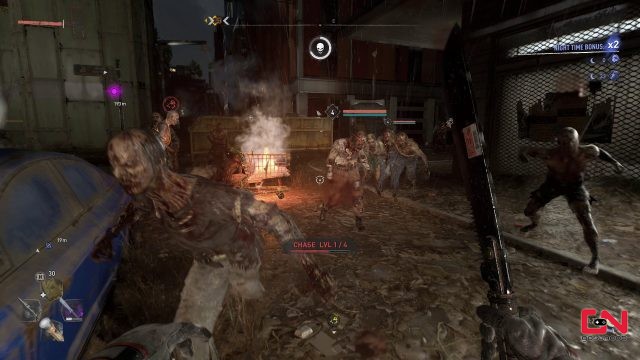 Save Yourself or Save Humanity

What Techland truly improved with Dying Light 2 is the story. With 350,000 words and 40,000 lines of dialogue in the game, you can imagine it was an essential item in the creative process. Throughout the game, you will face choices in both the main storyline and side quests. Some of them are just dialogue flair, but some will determine the faith of the people you meet in the game and, ultimately, how the ending plays out.

Techland decided to double down on choice even further. You can’t manually save the game nor go to a previous autosave. Your playthrough and the choices you make will stay with you until the end. This is a big gamble. If you don’t take your options seriously, you might realize, halfway through the game, that you made a mess of Villedor and the people around you. The only way to correct these mistakes is to play the game from the very beginning again. This provides significant replay value, but at the cost of frustration. Many players, comfortably accustomed to a more carebear approach by developers, will surely grumble. 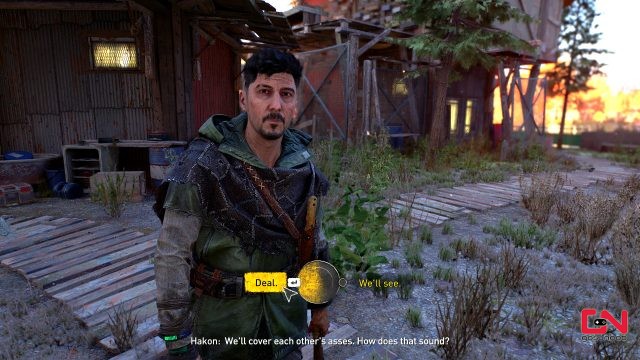 Choice-driven storytelling is the unicorn of game development. Many have promised meaningful choices in their games, but in the end, it all boils down to two or three things happening and making all those choices ultimately inconsequential. In Dying Light 2, the choices you make will affect a great many things.

Once you pick who you’ll back up in the world full of manipulative quasi-leaders with skewed agendas, you will miss out on everything that happens with the faction you didn’t side with. The only way you’ll be able to figure out what happened on the other side of the choice you made is to play from the beginning and make different decisions. To get the complete picture, you’ll have to play at least three times, each time seeing at least 10%-20% more of the game and its story. Both the main story and available side quests will be different. 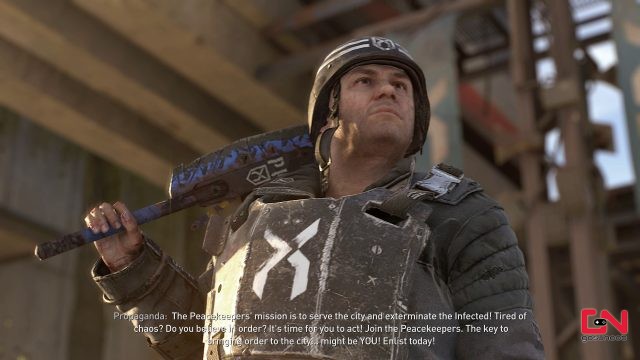 This has an unexpected drawback. You will feel that you are missing something during your first playthrough. Motivations of some characters and their destinies will not be apparent because they will happen behind the scenes in a choice you didn’t make. This is especially apparent when you are indecisive and sometimes back up one faction, just to give up on them and choose another. The first quarter of the game will often feel strained in the storytelling department. You’ll meet so many new characters with different agendas, and it will be hard to connect to any of them, let alone figure out their true motivations.

Luckily, things pick up a lot as you progress to the Central Loop. This middle part of the game really shines and feels more coherent. You get to know the land and its denizens a bit more, and the appearance of Lawan, played masterfully by Rosario Dawson, enhances the experience immensely.

Unfortunately, towards the ending, due to another rush of multiple-choice quests and unknown consequences they may have, you might end up with a conclusion you truly weren’t working towards. 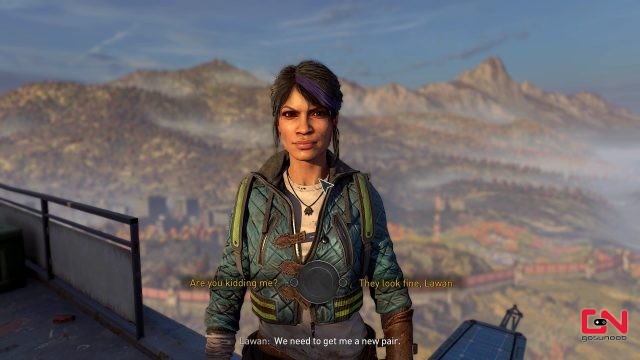 The first playthrough took about 40 hours, and during this time, I did encounter some bugs. Fortunately, none of them were significant, and the game ran smooth. I was playing on the highest graphical settings called High Quality Raytracing. It was apparent that development started long ago and was meant to be played on the previous generation of consoles and hardware. Something felt off with the graphics. But then, a day before this review was published, Techland released a patch and suddenly all the raytraycing filters and improvements were turned on. The game started looking gorgeous! This is the same way the game looked on the console footage I’ve seen released so far and it made it beautiful. 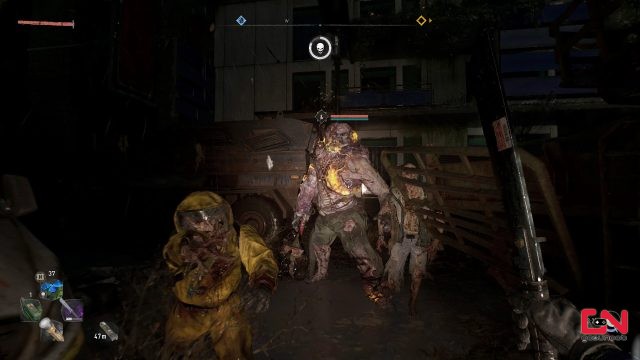 On lower graphical settings it can look a bit dated at times. Luckily, this is not too distracting, and once you immerse yourself in Villedor’s story and gameplay, you won’t care.

Replay value and then some

In the second playthrough, I took the time to enjoy everything the game had to offer. I lost myself exploring the city, climbing its various high points, and unlocking new skills. The world is full of side quests that will introduce you to quirky and fun characters. It reminded me a lot of the Fallout series, and that’s a good thing. It also has the horrid lockpicking mechanics from Bethesda games, which I hate with a passion, but c’est la vie. 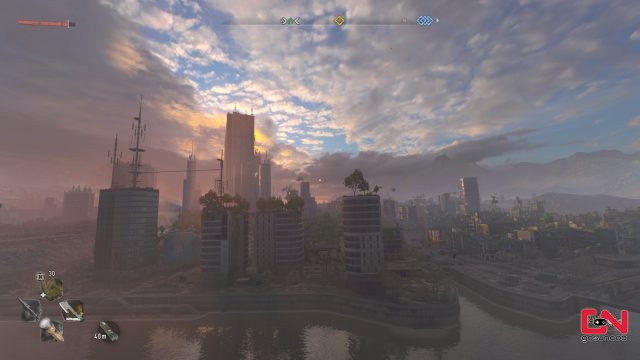 What surprised me the most during the second playthrough was the feeling of being reinvested in the story. Different choices revealed new nuances, and that made it fun. Another surprise was that some of the set pieces during the main story were as exhilarating as the first time. Being familiar with game mechanics now, I created poetry of motion while climbing the tallest building in town, which made everything even better.

Those that fall in love with Dying Light 2 Stay Human, like I did, will be rewarded with hundreds of hours of content to explore. Scratching the game’s surface will reveal depth behind what, at first, looks like expected game mechanics and cliché zombie apocalypse stories. Most of all, Dying Light 2 is a fun ride, even for those that play through it just once.

Free copy of this game was provided by Techland for review purposes.
Review platform: PC
Developed by: Techland
Published by: Techland