To a casual observer, my arrogant roman asshole “hero “is not worthy of any kind of justice or redemption. He’s bullish and always picks a path of oral toxicity in any conversation; he’s rude to everyone, patrician or plebian alike, and uses every opportunity to put people in their perceived place. But he’s doing well so far. Much better than expected, in fact. After fate dealt him a terrible hand, he was poised to fail, but he survived and thrived. I had decided to roleplay him as a bitter survivor scarred and shaped by his ordeal; once a naïve kid born with a silver spoon, he became typical patrician irritating scumbag who, by virtue of pulling himself by the sandal straps, treats everyone as a potential adversary. In the personality department, Expeditions: Rome delivers

Lost in a Roman wilderness of pain 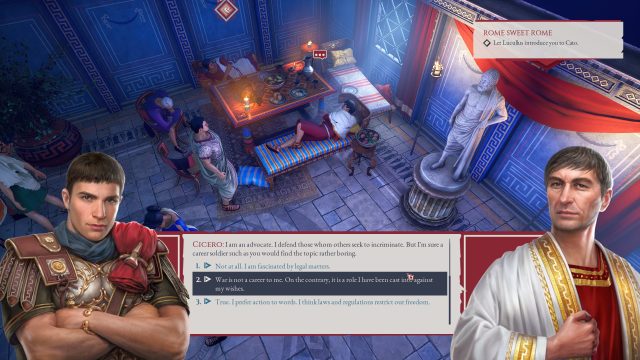 Expeditions: Rome is a multilayered game. In its core lies a tale of family, perseverance, and vengeance, with most upper layers dealing with the execution of those concepts. Our hero is the last descendant of a powerful noble family from the late Roman republic. His paterfamilias died unexpectedly, with all signs pointing to poisoning by the Scaevolans, a rival family with an ancient chip on their shoulder. Loyal servants managed to put him on a ship bound to Asia Minor in the cover of darkness. There, he will find shelter in the Roman war camp commanded by his late father’s old friend. With nothing but a few companions and family heirloom weapons, our promising young upstart will have to make a name for himself before he even dares to dream of returning home and setting things straight.

Like the previous games from the same series, Expeditions: Conquistador and Viking, Rome combine tactical, turn-based combat, roleplaying, strategic management, and a very long and rich narrative. How long? Seventy hours, give or take. Every potential player needs to know that fact before deciding to dive in. Expeditions: Rome is twice as long as it should have been. No matter how strong a bond you’ll form with the characters, near the end, you’ll feel an irresistible urge to end it.

My own private legion 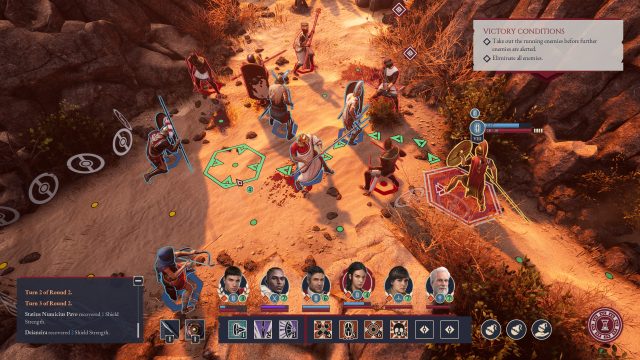 As mentioned, your grand adventure begins in Asia Minor, more precisely, on the Greek island of Lesbos. King Mithridates from Pontus, an empire that comprised much of modern northern Turkey, took large swaths of land from Rome, exploiting the incompetence of the previous governor. Fate had you in a suitable place at the right time – your combat ability impressed powers that be so much that they promoted you to Legatus and gave you command of your own legion. Tool of the trade of conquest. Commanding a four thousand strong (plus change) army, you’ll be tasked with conquering all the regions in Asia Minor and defeating dastardly Mithridates.

Legion logistics and missions are pretty straightforward and, sadly, limited. The most crucial task in any province is defeating the enemy army in the field using various strategies in different battle phases. You can’t decide about your legion’s composition, i.e., the ratio between infantry, cavalry, saggitaria (arches), or auxilia. Before the battle, the only thing you CAN do is spend money to reinforce the broad number of soldiers. Once the battle is joined, the only thing you can pick are different strategems and watch the situation unfold by itself. But no matter what you choose, you’ll always win if you face similar numbers in the field. 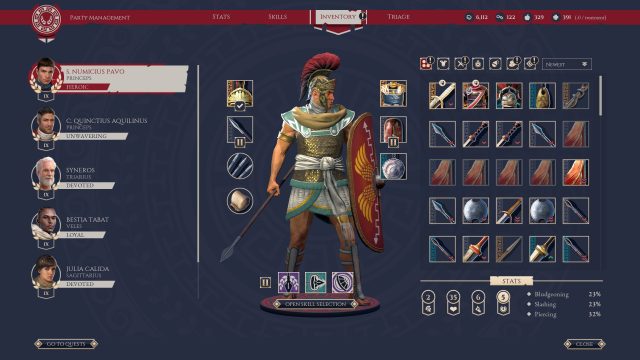 The entire campaign can be described as a sort of “gated conquest “. Most of the time, you can pick the next target province, siccing your legion on it. Still, after each strategic battle, you will be expected to complete a tactical “pacification “mission to ensure the obedience of the local population. You can’t just worry about the big picture here, avoiding getting your hands dirty.

Turn-based action is a party-sized affair. You have a fixed set of companions tied to the story, but you can recruit several generic Praetorians to fill various tactical roles. Those people are expandable, and besides combat, you can use them for multiple roles in the legion camp (crafting, etc.). For example, I preferred to have more than one archer in the group, as they are slightly overpowered.

The turn-based system in the game is pretty flexible. You can pick any member and freely spend his action points, all at once or in increments, during your turn. There aren’t initiative tiers and any other complex mechanic – your turn is all yours from beginning to end. Your people can sustain semi-permanent injuries in the battle, and that’s one more thing backup Praetorians are suitable for. Instead of speeding time waiting for the healing process to finish, you can temporarily replace one or more companions with generic help. 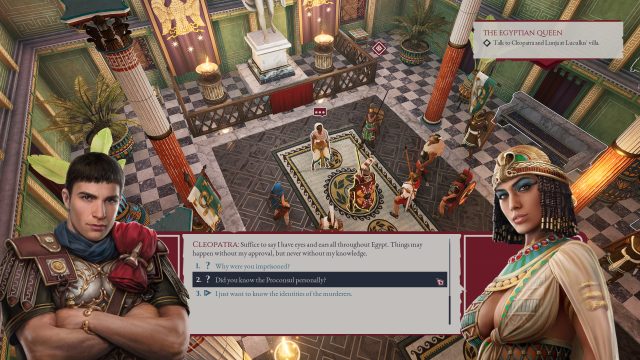 So you had conquered Asia Minor, returned to Rome, and began to sort your affairs, thinking you had spent pleasant fifteen hours writing your own historical fiction. Not so fast! Instead of ending credits, the game abruptly ships you to north Africa for the next major stage, involving warfare, intrigue, and Cleopatra. And after that, Gaul! No rest for the wicked, my young Legatus.

In conclusion, Expeditions: Rome is not sufficiently grandiose for the time sacrifice it expects from the player. The competition for that resource will be brutal this February – Dying Light 2, Sifu, Horizon Zero Dawn, Elden Ring, etc. The real winner could be anxiety itself.