Dying Light 2 is a game filled with choices. These choices will often catch you unprepared, unsure of what to pick. One of these early choices comes in the form of what to say to Hakon after getting the Biomarker from the hospital. He will ask you to accompany him to the ocean. You can either reply “Deal.” and agree to it, or “We’ll see.”, which results in you telling him that you can’t promise anything yet. Which reply should you choose? What are the consequences of both of these answers? We will explain all of these choices in our Dying Light 2 Hakon Choice Deal or We’ll See guide. 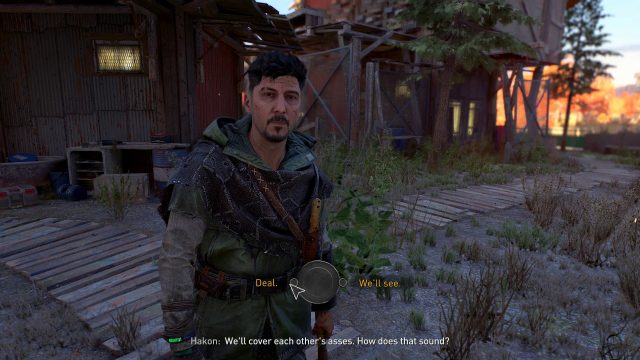 After getting out of the hospital, Hakon will tell you about his dream – to go to the ocean. He will ask you to help him go there. If you answer “Deal.”, he will be very pleased that you have agreed to help him get there. Choose this if you want to role-play Aiden as an upright character who is all about helping his friends.

On the other hand, if you select “We’ll see.”, Aiden will tell Hakon that he can’t promise anything yet. Hakon will, understandably, be very sad if you select this dialogue option. This is the option for you if you envision your character as someone who doesn’t want to make promises they aren’t sure they can keep.

Your choice here will be referenced later on in the game. Since Hakon is a major character in DL2, you should always think long and hard about how you want to shape your relationship. Dying Light 2’s title “Stay Human” says a lot about its central theme, so you should keep this in mind when deciding how to role-play Aiden.