Sheep or Wolf is one of the choices in Dying Light 2 that you have to make while talking with Carl. One of the more interesting things about Dying Light 2 is the way its decision system works. While there are so-called “crossroad choices” that mark decisions that will have huge, permanent consequences on the rest of the game, there are also plenty of smaller choices to be made along the way. DL2 is a game that likes to keep you on your toes, so that you are careful about what to say to whom. For example, when talking to Carl, you will be presented with three choices about what to say when he asks you if you are a wolf or sheep. You can say that you are the wolf, the sheep, or that you don’t care for such metaphors. Our Sheep or Wolf Dying Light 2 Carl Choice – I Don’t Like This Metaphor guide will cover all three choices and their consequences, so that you know what to pick. 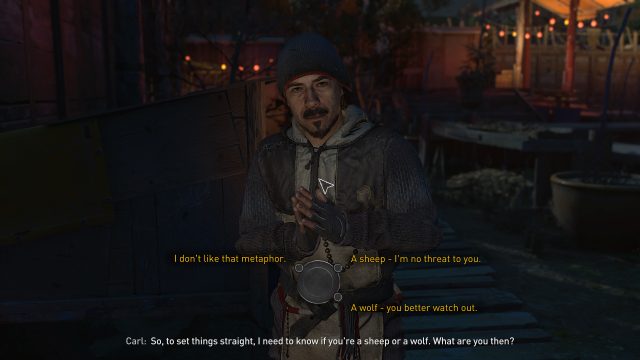 When asked about his intentions, Aiden can reply that he is a sheep. Carl will dislike this, since he will interpret that only Wolves would claim that they are sheep. After all, a “Wolf in sheep’s clothing” is a very common saying. In any case, you will be able to find out more about Sophie if you pick this.

A Wolf – You Better Watch Out Choice Dying Light 2

On the other hand, if Aiden flat-out confirms that he is a wolf, Carl will not believe him. Like in Game of Thrones and its iconic “Any man who must say ‘I am the king’ is no true king.” line, Carl will take this as a confirmation that you are not really a wolf. The rest of the conversation will play out as before, and you will get information about Sophie either way.

Dying Light 2 I Don’t Like That Metaphor Carl Choice

The third option is to brush off the question and say that you don’t like metaphors. Carl will remind himself that you are a Pilgrim and that Pilgrims prefer to act instead of talk. This will also lead to the same result.

There’s really no discernable difference between any three of these choices. Whatever you say will lead to the exact same result, and you can’t mess anything up. So, relax, and pick whichever one you prefer – from your own viewpoint and how you want to role-play Aiden.