Chapter 10 – The Craftsman’s Tools is one of the longer chapters. It provides us with more information about the new character that is inside a cell in hospital’s main hub.
▼Article Continues Below▼
Be sure to check out his cell whenever you enter this part of the game. Later on, you come across the same 6 legged hairy creature that you faced in previous chapters. At the end of the chapter a new type of creature creates a new challenge for you to overcome. Chapter continues with telling us the story of the game, but not as much as the previous chapter did. 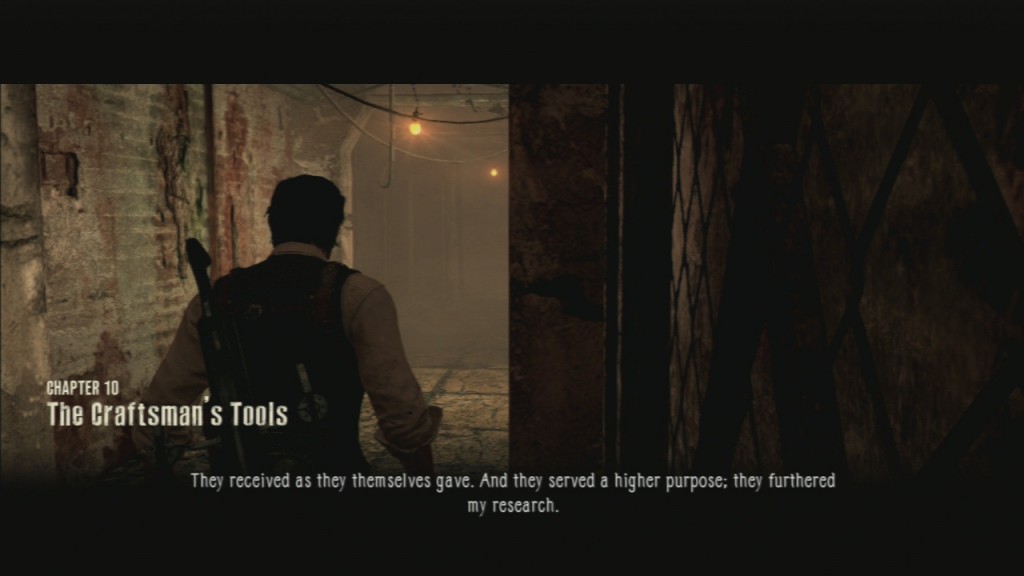 At the start of the chapter there is a door that takes you to the Hospital’s main hub. Next to this door is a white desk with a typewriter on it. On the same table is Document: “Mansion Basement Note”. Go inside a nearby room if you want to find more lore. If you choose to do so visit the nearby hospital’s cell and collect Newspaper: “Car Accident; Two Dead”.
Leave this area and continue further in. As soon as you reach the first trap, turn left into the room. If you activate the trap, room entrance gets blocked. Destroy the wooden boxes inside in order to reveal location of a Key Stone Statue. This is the first key I’ve found in this chapter.

Later on you enter a large room. You’ll recognize this room by small brick walls with barbwire on them. You’ll find a huge carousel inside that has a sharp blade that spins together with the carousel, beheading you in case you do not crouch. I’ve activated the trap and that turned on all the lights as well, drawing some attention from the monsters there. This is actually helpful as you can use the carousel’s blade to kill monsters while you crouch. Keep to your right until you find ladders inside the first side room. Climb to the second floor. At the end of a new room, on a table, there is another Key Item History: “Battery Pack” and a Battery Pack you need to continue the chapter.Go back to the carousel room and keep to your right. Inside the next side room to your right is the generator where you should place the Battery Pack. This opens double doors and lets you leave the area.Before you use the ladder in the next room check out the side room. There is a Map Fragment 18 inside it.

As you go down the stairs a blood trail leads you to a room with a couple of doors. This is where the game automatically saves. Inside this area you can notice a room with a spike trap. Inside that room is another Key Stone Statue. Spike trap has an activation timer. You have just enough time to go get the key and go out. This is why you should shoot the statue before going in.Go through the door next to the spike trap room. As you enter turn left. You can see another Battery Pack in the distance. Grab it and continue further inside the same area. You pass by a couple of traps we never came across before. They are currently not active, but they become active once you reach a hole in the metal fence. Inside the next room is a generator. Insert the battery pack and that opens the double door. This also activates all non active traps and releases new enemies…You are introduced to a new type of enemy. He has a large, harpoon like, weapon that he shoots at his target. Luckily for us he is not that fast. There is a portion of the wall where you can kite him around in circles. He comes out of a room where you can use the switch to raise one of the traps in order to escape this area.The next Key Stone Statue is located behind a moving heat trap. This trap moves from one wall to the other revealing a hidden place. Shoot at the stone statue and crouch your way to the key. We would like to thank user Steven for additional information.As you continue going past the traps you come in front of a room where a couple of heat panels move from right to left. Instead of going to the door in the other part of the room turn right and use the ladder there. They lead to Map Fragment 19 and a hidden room with two of those harpoon guys. Once they are defeated use the gate switch to leave the room and another switch to raise the final trap. You are back in the room where you found the Key Stone Statue (and a spike trap).Go through the unlocked double door. Further in you are returned to the asylum. As you leave the tunnel with hospital beds and wheelchairs going up you’ll arrive inside a room with human anatomy pictures. On the bed there is Audio Tape: “Laura”. There are also blood marked door found in that room. Go through them if you want more lore. Lore like Personal Document: “Journal Entry – February 2012” – inside the same room, Newspaper: “Home Destroyed by Fire” and Missing Persons Poster: “Patrick” – inside the Hospital’s Main Hub.

Going through the next room you’ll arrive at an area where the 6 legged hairy creature walks around the cages in the central part of the room. As you use the first metal gate switch it breaks through the caged area and the chase starts. Don’t wait for the gate to open in full, crouch and go through. Follow the only way out and dodge new creatures that show up.

You find that the next passage is blocked with fires that come out of the pipes. If you go left here you can notice bunch of loot behind a metal fence, including another Key Stone Statue. To collect the key next to the elevator you must kill the long haired beast before you reach the tunnel that leads to the elevator (before the cutscene). We’d like to thank user cYcLoNe for this additional information. Use the only nearby switch to turn off the fires from the first fire gate. The next fire blocked passage requires you to shoot a switch on the pipes above. It slowly turns of the fire as it redirect gas flow into another pipe.Gosu Notes: Gas Fire Passages get extinguished with the switches positioned next to them or by shooting the pipe switches in the ceiling. Six legged hairy creature kills you instantly if you are in front of it for more than 1 second. The Creature also spawns from dead bodies. Burn them to control its movement. Once it is far away from you the creature usually teleports a short distance. There is a specific sound that follows this action. Shooting toward the wall bomb proximity mines makes them explode. There are couple of gas pipe switches that make the fired pour down once they are shot.

Six legged creature shows up once again in the next room. It follows you through several rooms from there on out. Passing by the room with inactive furnaces you arrive inside a room with active furnaces. There is another passage blocked by fires. In order to turn them off you have to use the metal switch. This is a tricky part as you have the hairy creature on your back at this point. In order to use the switch safely you may want to do a couple of things. The best option is to make the creature go under one pipe with the switch on. Shoot the switch once the creature is underneath the pipe. This stuns it with fire for a couple of seconds giving you enough time to use the metal switch that turns off the gas and extinguishing the fires. Other choices you have is to shoot toward the creature with enough bullets to make it run away. This is a rather expensive method and is not advisable. Third choice is to use your lighting/freeze agony bolts and stun the creature as you turn off the gas.Next room requires you to do pretty much the same thing. As you go through the circle shaped entrance you step into a room-trap. To break away shoot toward the gas switch on the ceiling. It is located just next to the ceiling fan.Next larger room is where the fun starts (like you didn’t have enough of that). In order to go through the fire passage you have to turn off three gas switches while being chased by the hairy creature. I’ve died here more times than I’m willing to admit. There are no gas pipes from which to pour fire down on the creature in order to stun it.The last fire passage room has three gas switches and one manual switch. One of the gas switches turns off the fire that blocks entrance to the manual switch. The other two start fires that shoot down on the area bellow them. Sequence you have to follow is this:

Hallway behind this fire passage leads toward the elevator. This elevator takes us away from this area and the creature.

Fighting the big creature at the Parking Lot

After a short cutscene you find yourself inside the mansion. Before going inside the only open passage don’t forget to grab Map Fragment 20 to your left.After another cutscene inside the mansion you arrive at the parking lot. Head toward the room behind the blood marked doors for lore like: Missing Person Posters “Marcelo” and Newspaper: “Irregularities at Hospital”. Be sure to check out the mysterious guy at one of the hospital’s main hub cells.As you reach the final part of this chapter you have to fight with the largest monster you have met so far in The Evil Within. Fight takes place in an appropriately sized area – large parking lot. There are a couple of things you should know about this creature. While he is in close vicinity you can’t hide in rooms or behind stone pillars… You can eventually run away and hide from it, giving yourself a couple of seconds of rest. The Creature is extremely fast. It doesn’t one shot kill you, but it does a lot of damage. Fires above the burning cars might be able to damage it but I can’t know for sure.After a couple times of me running away from it, a few successful shots and 3+ syringes used, I found a spot in the parking lot where he couldn’t reach me. It is close to the door with the exit sign above, between a car and the wall. Soon it revealed its weak spot, a purple eye that you can shoot at. It goes down rather fast after that. Once it is killed you get achievement/trophy “The First, Not the Last” and 20 000 Green Gel points that you have to collect.

NEXT POSTEvil Within Chapter 11 guide – Reunion