Doppelganger follows the Three Blind Mice main story quest. After you land on Hoyt’s island and meet with Willis’ friend Sam you are off to his house in order to talk about your next action against Hoyt. 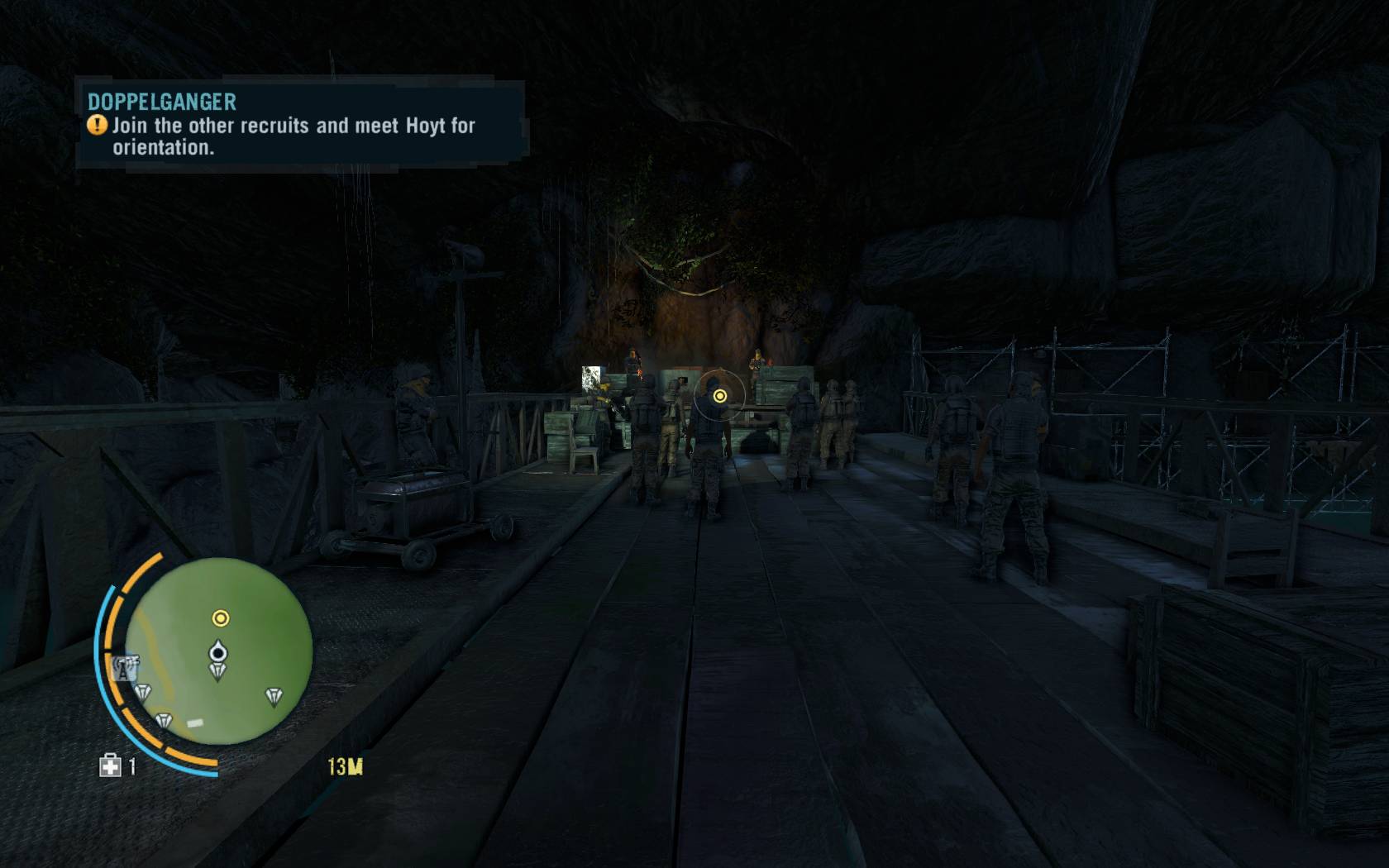 Find Sam and ask him about Hoyt.

Sam’s house can be found in Thurston Town where The Crazy Cock bar is. Later on you can use the fast travel option to get there. After a small chat you have with Sam you both decide it is in your best interest to join the privateers if you want to defeat Hoyt and his organization. You can join them by stealing a “recruit privateer outfit”.

The cenote can be found south of Thurston Town. Heading south will take you to a nearby radio tower. Activating it will discover a big part of the island.

Enter the cenote via the stairs.

As soon as you approach the cenote you will notice a guard at the top of the stairs that lead into the cenote. Don’t let the privateers notice you until you grab the recruit privateer outfit or the quest will fail. Throwing a rock away from the stairs will distract the first guard and help you sneak by him.

Infiltrate the cave without being spotted.

The stairs lead into a hidden cave. At the start of the cave, and before the next checkpoint, there will be two privateers you need to get past. You will encounter a charger first and he has a long patrolling route, while the other is deeper inside the cave. If they come close to each other distracting them with a rock can be tricky, since the cave tunnel is very narrow. If you have problems with this part, wait for the charger to come close to the first cave room (the one with the waterfall) and distract him by making him go to the cave entrance. While he goes to the cave entrance you can take cover behind the ammunition cargo across the waterfall.

Approach the entrance to the dock.

After you get past the previous two privateers you will find yourself in a part of the cave with a dock. Before the next checkpoint there will be two more privateers. While the second always looks at the water and is easy to sneak by, the first privateer can cause problems, since he tends to patrol. You can get past him by crouching behind his back while he looks at the dock and then throwing a rock in the direction you came from so he walks away from you.

Find an alternate route into the dock.

This part is quite tricky. There are many privateers within a small space and you need to go past all of them without getting noticed. The way you to do it is to first take your camera and tag them all, so you can follow their movement more easily. After you tagged them all hug the left cave wall (left wall from where you entered this part of the cave). There will be green leaf bush you need to go through and that path will lead you to a hidden side road that takes you to the lower ground level of the cave. Soon enough you will reach a big rock pillar you can hide behind. If you go right of it you will go bellow the metal bridge that connects the lower and the higher cave floors and further on to the dock.Be on alert! The privateers on higher cave ground can be at the end of the bridge and there are many other privateers on the lower level. If you need to distract the privateers on the higher level throw a rock at the cave entrance before going to the side path you just passed by. While distracting privateers on the lower level with a rock you need to be extra careful since spamming throw rock will only confuse them and they will stop going toward the rock distraction.

After you reach the dock undetected, jump in the water, and swim southwest to Hoyt’s ship. You will find stairs you can use to climb the ship in the back of the ship.

Quietly eliminate the recruit and take his uniform.

The recruit you need to steal the uniform from can be found immediately after the first few boxes. He is looking at the water and can easily be taken down. Play safe though and distract him so he goes away from the edge and moves towards the back of the boat since there can be other privateers patrolling nearby and you will fail the quest if they notice you.

Allow the privateer officer to scan the ID.

The privateer officer can be found at the front of the ship. Proceed forward until you meet him.

Join the other recruits and meet Hoyt for orientation.

The other recruits are on the dock near the ship. Join the first row in order to start your next objective.

Use the boat to leave the cenote.

The boat can be found at the end of the dock. Use it to pass by Hoyt’s ship and eventually leave the cave.

NEXT POSTDMC A man with guts and honor