Fishing is an optional activity in Far Cry 5. It’s a mini-game that rewards you with fish, which you can sell for money. There’s not much more to it – you’ll get some trophies from doing it, but it’s mostly to soothe the soul after a murderous rampage. The downside is that it’s not exactly clearly explained how to fish, so a lot of people are quitting the hobby in frustration before even starting. That’s why we’ve written this guide on Far Cry 5 fishing, to help you learn the ancient skill.

First of all, make sure you’ve equipped your fishing rod. You can check and equip one at pretty much any shop (they’re listed under weapons). Then you need to find a fishing spot, as you can’t just cast your line into a body of water willy-nilly. There’s a bunch of them all over the place, so it shouldn’t be too hard. We’ve made a list of all the hard fishing spots, but those aren’t really suited to beginners.

Once you’re there, don’t expect a prompt or anything – you can cast your line anyhwere in a radius. Open up the weapon wheel, then switch to the utility wheel by pressing R1 (RB on Xbox). Select the fishing rod from the radial menu – it’s at the top. Use R2 (RT on Xbox) to cast the line – the longer you hold it, the farther it’ll go.

Then you play the waiting game. When the fish starts pulling on the line, press R2 to hook it. It’ll start pulling, and you’ll have to push the right stick in the opposite direction while holding L2 (LT) to reel it in. If the line starts to change colors (to yellow, then red), ease off on the reeling until it’s green again. When you’ve pulled it in close enough, Rook will take it out of the water, admire it for a while, then shove it in their pocket. 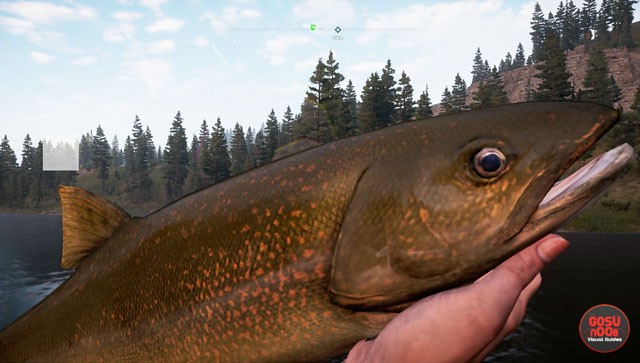 How to change bait and equip new rods

If you want to change your rod, you can do it like with any other weapon – visit the shop, find the rods in the special section and scroll down to the one you want to use. Press X (A on Xbox) to equip it. If you want to speed up the process, you’ll want to use appropriate bait for every type of fish. You can change your bait by opening up the utility wheel, hovering over the rod and pressing Triangle (Y on Xbox).

NEXT POSTFar Cry 5 Capture Parties & How to Avoid Them