You’ve pre-ordered FIFA 23 Ultimate Edition on Steam in order to get the three-day early access but it is not working? The FIFA 23 release day is finally here! At least, for those who have preordered the UE. Unfortunately, it seems that this pre-order perk is not working properly for many players out there. Many are reporting that they can’t play FIFA 23 early access on Steam despite pre-ordering the Ultimate Edition of the game. If FIFA 23 early access doesn’t work on Steam, read on to learn what we know about it. 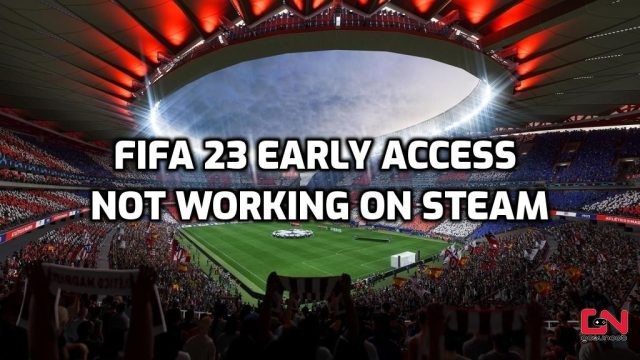 Before we jump to the problem, let’s first see when FIFA 23 early access kicks off in Europe and NA. According to official information, FIFA 23 early access launches on September 26th at 3 pm PT, 6 pm ET, 11 pm BST, and at midnight in Europe (CEST). Some players are bypassing this time zone restriction by using the Xbox New Zealand trick (switching to their time zone to play it early). However, for Steam FIFA 23 players, the “Early Access Not Working” issue prevents them from playing, as they simply can’t start the game. They don’t even have the option to play the game. They have pre-loaded the game, but the good old green “Play” button is not there. Why is that so?

Well, unfortunately, it seems that history repeats itself, and not in a good way. Last year, for FIFA 22 early access, a miscommunication occurred between Steam and EA. Namely, Steam wasn’t aware that the Ultimate Edition owners had three-day early access. Thus, the game remained locked even for them. And while we can not confirm this, it seems that the same issue is occurring again. Steam gamers are again unable to play FIFA 23 early access despite having the Ultimate Edition. And, sadly, there’s nothing you can do here. It needs to be fixed between EA and Valve. When it happened last year, it took them around 12 hours to fix the problem, so don’t get your hopes too high that it will be fixed quickly this time around. We will make sure to update the article if any new development comes to light.

PREVIOUS POSTHow to Get 4600 FIFA Points From Ultimate Edition Preorder