FFXV Episode Ignis DLC new attire and outfits features new looks for the loyal butler, including various different glasses and more. They can all be obtained by playing and exploring the DLC. They endow you with various bonuses and perks, just like all other clothes in FFXV. To help you out, we’ve put together a guide on how to get new Episode Ignis DLC outfits and attire.

This guide is a work in progress. We’ll update it further as we uncover more clothing items in Episode Ignis.

Where to Find New Glasses in Epsiode Ignis DLC?

You can find the new glasses that Episode Ignis brings in one of the shops found in the DLC. The shop in question is L’angolino. It’s on the far left of the map; the lower one of the two. From the nearby campsite, head into the passageway leading down. On the lower floor, find the second set of stairs leading downwards (it’s directly in front of you). Once you go all the wau down, you’ll find yourself right in front of the shop. The glasses are all fairly expensive, so keep that in mind.

First of all, the Thick Frames. These glasses are reminiscent of those that Ignis wore as a student. They’ll cost you 8000 gil, and they boost your spirit.

Next up, we have the Feline Frames. They are a pair of nineties-badass sunglasses. They are the cheapest of the bunch at 3000 gil, and they reduce ice and ballistic damage.

The third eyewear on the list is the Monocle. Who wouldn’t want to go into battle wearing an old-school single lens? It’ll set you back 8000 gil, but it will increase your critical hit rate, which is pretty sweet.

As a direct opposite to the monocle, we have the Classic Frames. This is a strange one. These glasses have the wrong prescription, so they reduce your critical hit rate. They cost 15000 gil.

Last, but most certainly not the least, are the Party Frames. They cost 15000 gil and look patently ridiculous. They make up with that by boosting your strength and increasing all elemental resistances. You see, that’s because they put you in such a festive mood.

To unlock the Crownsguard Casual outfit for Ignis, you need to complete the Episode Ignis DLC. That’s it. Sure, that might not be as exciting as figuring out some special way to get it, but oh well. The outfit boosts your strength. It consists of a leopard-print shirt, black pants with a black leather belt, and black leather shoes. Also, this is probably the most relaxed Ignis has ever been, clothes-wise. 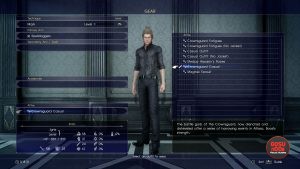 NEXT POSTResident Evil 7 Not A Hero – How to Download DLC