Shops in FFXV are a valuable resource of weapons, consumables and much more. At the start of the game, you can buy items from weapon vendors, mini mart shops and from peddlers that sell stuff next to their vehicles. Stuff they sell can be extremely useful as it can increase damage output by a lot. Some of the most expensive items you can buy from them are for Regalia’s customization. Then, there are the diners. Diners are locations where you can eat, but also acquire recipes and take on hunt quests. 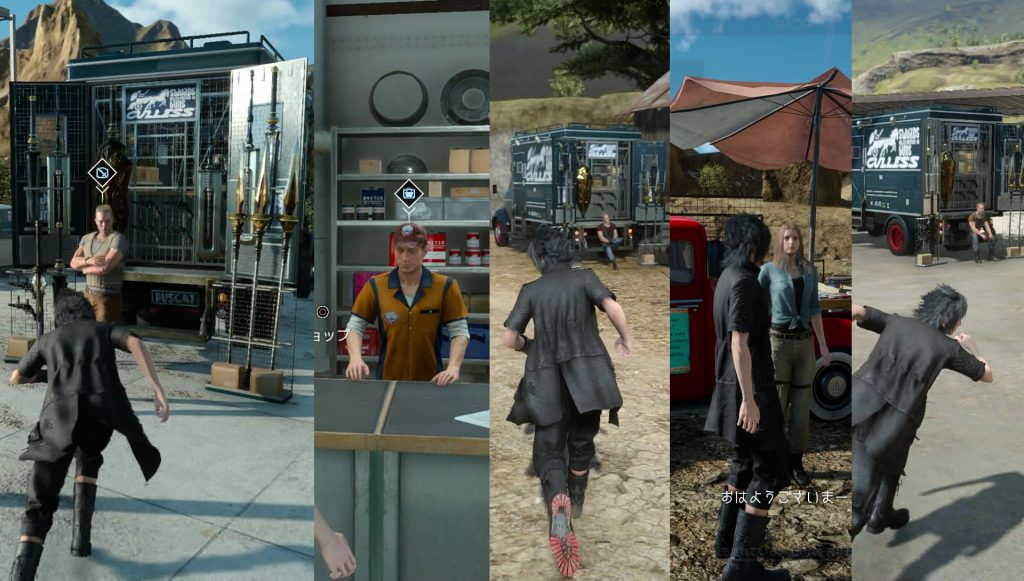 There are eight shops found throughout the Leide, the first zone you go through in chapter 1. The first two shop vendors are in Hammerhead. Weapon vendor (1) is right in front of the garage. The other shop vendor (2) is inside the Mini Mart, located next to the garage.
Another weapon vendor (3) and peddler (4) are found in Keycantrich Ruins, northern Leide, Prairie Outpost.
One peddler (5) is found next to her red truck, in the lower part of Leide, Hotel Base. This peddler is found next to the Crow’s Nest Diner.
The last three vendors are found in southernmost Leide. The weapon vendor (6) is in the parking lot and the shop owner (7) is at the start of the long pier. The one (8) found on the small pier, next to the larger one, sells fishing stuff.
The first diner you can find in Leide is the Hammerhead diner at the beginning of the game (9). It’s right next to the Hammerhead auto shop. The second diner in Leide is the Crow’s Nest Diner in Longwythe rest area (10). It’s across the street from where you park the Regalia. The third restaurant is in Galdin Quay (11), in the area of the same name, It’s at the end of the long pier.