Final Fantasy XV Photo Ops are places of interest where Prompto can take pictures. When you find them, you can ask him to snap a pic, and he’ll photograph either the whole group or just Noctis. Some of them are marked as quests, while you’ll have to find others on your own. They’re important since you can use them to earn AP with the appropriate ability. They’ll also help you unlock the Immortal Photobomb trophy. In this guide, we’re going to show you a list of all FFXV photo op locations. 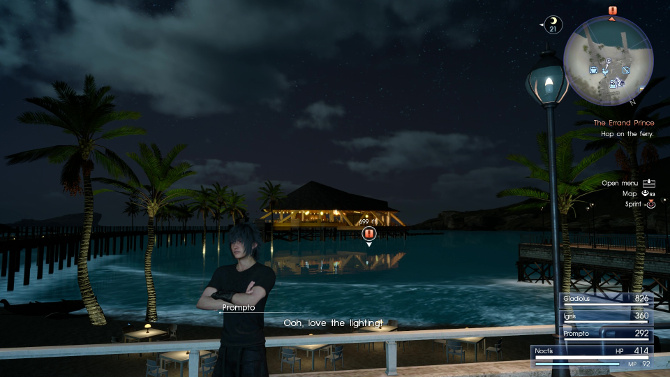 Note: This guide is under construction. We’ll update it once we have more information.

Prompto will snap his camera all the time – even in battle. The pictures he takes that way are more spontaneous, taken in the heat of the moment. They can also turn out bad, with your crew members in awkward poses, enemies blocking the view, etc. If you want photos that are more organized, clean and well executed, photo ops are the thing for you.

The first one you’ll discover is at Galdin Quay. That’s the outpost with the seaside restaurant on stillts, in the south of Leide. As you exit the car, go a bit to the right of the boardwalk leading to the restaurant. Noctis will say something about taking a picture – when you press the appropriate button, he’ll strike a pose and Prompto will snap the photo.

The problem is that they aren’t marked on the map. You’ll only discover them by getting close enough so that someone comments on them. Even then, not all of them will be marked when you find them. This is why we’ll be making a map of all the photo op locations we discover while playing. Stay tuned, since we’ll be adding more as we progress.

NEXT POSTEndless Sprinting in FFXV