Final Fantasy XV Dungeons are located throughout the game and represent special areas with a lot of good loot and bosses. Some of them are part of the main story quests and are related to Royal tombs that Noctis and the company have to visit in order to collect the Armiger weapons.
▼Article Continues Below▼
Others are optional and are there to challenge you or help you finish a side quest or get good gear. Dungeons are fan favorites and probably some of the best parts of the game. This guide will show the location of all dungeons in Final Fantasy XV, what types and levels of enemies can you expect to see in them and the most important information about the loot and unlocking mechanisms for each. We will also be providing detailed guides for each dungeon and you can find links to them in the list bellow.

The important thing is to think of Final Fantasy XV dungeons as places you would encounter in any MMORPG or several RPG games out there. While roaming the open world you can come across an entrance marked with a red icon. You can enter right there and then and the dungeon is usually a labyrinth of sorts filled with narrow corridors. It is usually a guided experience with several alternate paths you can take to the end boss. Along the way you will be able to pick up higher grade loot and gear for Noctis and friends. These range from Phoenix down to accessories and weapons.

Here’s a map of all dungeon entrances in the game. We concentrated on dungeons present in Leide, Duscae and Cleigne regions of the game. There are a few more dungeons later in the game, but you can’t miss them as they are part of the main story quest. 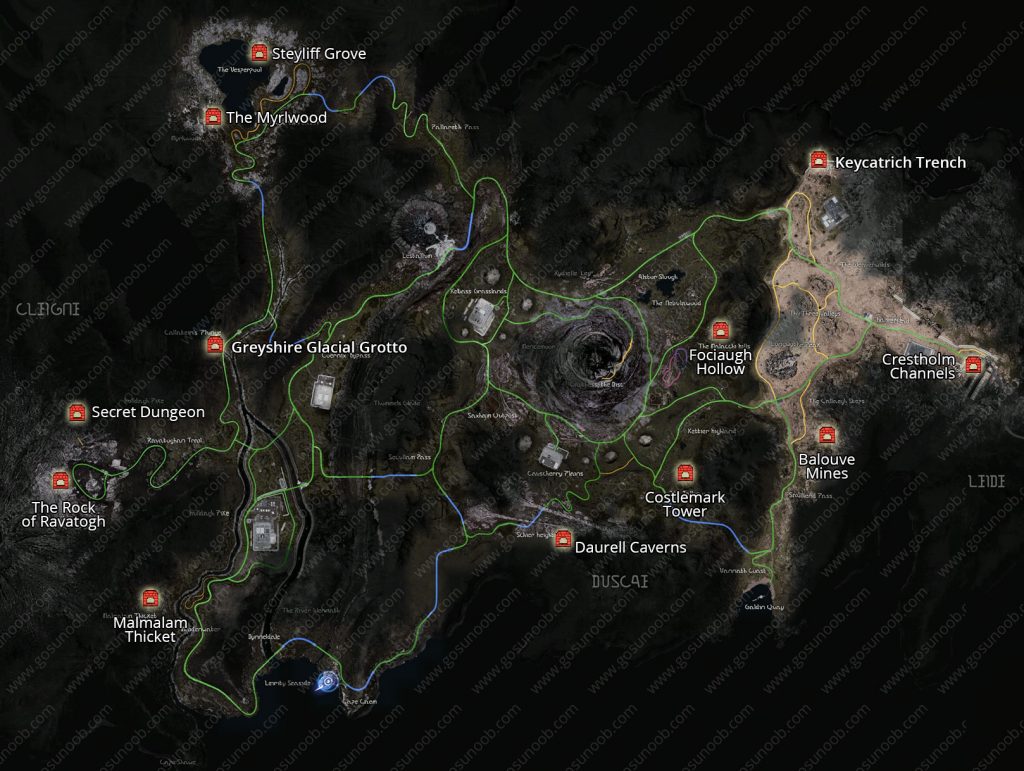 Bellow you will find all the key information about each dungeon in the game. We list the recommended level based on the highest level mob in the dungeon. We’ll also note if there are special conditions you need to meet to be able to enter the dungeon. If we’ve written the guide for a particular place you’ll also find the link to it there, otherwise you’ll find notes about gear of significance found in the dungeon.

Recommended Level: 12
Region Location: Leide
Entrance: It is the first dungeon in the game and to enter it you will have to do the main quest during Chapter Two. It contains a Royal Tomb and your first Armiger weapon.
Boss: Level 12 Arachne. Vulnerable to Greatsword, Machinery and Fire spells.

Recommended Level: 19
Region Location: Cleigne
Entrance: Another dungeon you get taken to as part of the main quest. You’ll be sent here to look for an Armiger after you first visit Lestallum.
Mobs: lvl 8-11 Imps and Flan
Boss: level 17 Ronin mini boss and 3x lvl 19 Mindflayers at the end
Guide: FFXV Greyshire Glacial Grotto Dungeon Walkthrough »

Recommended Level: 30
Region Location: Leide
Entrance: Part of the main quest “The Trial of Ramuh” in Chapter 5. There is a rock before that quest that you can’t go through.
Mobs: lvl 13 Imp, Lvl 20 Hobgoblin, Level 21 Thunder Bomb, Level 19 Mindflayer
Boss: Level 30 Naga – She can turn you into a toad so make sure you bring potions against that.

Recommended Level: 38
Region Location: Cleigne
Entrance: When you drive during the main quest “All Set to Set Sail” in Chapter 6 your buddies will recommend you check this dungeon out.
Mobs: Level 30 Naga, lvl 32 mandrake, lvl 37 soldier wasp
Boss: Level 38 Bandersnatch
Reward: Armiger Weapon is at the end.

Recommended Level: 38
Region Location: Cleigne
Entrance: Rock of Ravatogh side quest takes you here and the reward is Armiger weapon – Mace of the Fierce. It is also part of the side quest Vyv’s Volcanic Inspiration This used to be a cave that Noctis could visit in the Duscae Demo. In the final version of the game this is a dungeon with Royal Tomb in the end.
Mobs: Level 25 Saphyrtail, Spiracorn, lvl 28 Killer Wasp, lvl 29 Thunderoc, Lvl 38 Wyvern Note: You can go through the whole dungeon without fighting the boss and picking up all the loot, including the Armiger, at around level 30.

Recommended Level: 32
Region Location: Cleigne
Entrance: You will have a chance to enter this dungeon as part of the main quest Party of Three.
Notes: It has several floors you can access via the elevator or hidden passages/stairs. Boss is on the 3rd floor down. This is Royal Tomb location.
Mobs: Level 24 Skeleton, lvl 25 Reaper, lvl 25 Creme Brulee, lvl 27 Lich, lvl 30 Iron Giant
Boss: Level 32 Quetzalcoatl – flying enemy and bring lightning resistance. Drops Scarlet Splinterbone

Recommended Level: 41
Region Location: Duscae
Entrance: No requirements.
Notes: Rather short dungeon. Mobs: lvl 41 Necromancer, lvl 17 Ronin, lvl 20 Hecteyes, lvl 30 Iron Giant
Boss: As it seems right now the final fight is just against the Iron Giant accompanied by Necromancers and Hecteyes. It is a tough fight because of the multiple enemies, but no named boss
Reward: Moogle charm accessory is found on the ground fairly early. It increases EXP earned from battles.

Recommended Level: 50
Region Location: Leide
Entrance: You can enter this dungeon at any time. Notes: It has several floors you can access via the elevator or hidden passages/stairs. Boss is on the 3rd floor down. This is Royal Tomb location. Mobs: Level 7 goblin Boss: Level 52 Aramusha.

Recommended Level: 50
Region Location: Leide
Entrance: You will have to follow the main story up until Chapter 7 to enter the part of the map containing this dungeon.
Mobs: Level 44 Bussemand, lvl 35 Gelatin, lvl 46 Yojimbo, lvl 49 Nagarani mini boss , lvl 39 Ereshkigal, lvl 38 Black Flan
Notes: Yojimbo and Bussemand come together. Do lightning to dispose of Bussemand quickly then fight the samurai Boss: Level 50 Jormungand – bring fire resistance. Drops Drooping Whiskers.
Reward: When you kill the lvl 38 Black Flan you can pick up the Auto-changer accessory. This changes Noctis’ weapon after each attack. Cindy sends you here as part of her side quest to get Enhanced Headlights. These will drive away daemons when you drive at night!
Guide: FFXV Crestholm Channels Dungeon Walkthrough »

Recommended Level: 55
Region Location: Duscae
Entrance: You can enter this dungeon only at night. Dino sends you on a side quest Treasure beyond measure here.
Notes: This is one of the hardest dungeons in the game. Takes several hours to complete. You will have a maze to go through and waves of enemies to defeat. Mobs: lvl 35 Gelatin, lvl 38 Thunder Bomb (there are 15 of these at one time – bring lightning resistance – you can bait these to explode on their own by exiting and entering combat)
Guide: FFXV Costlemark Tower Dungeon Walkthrough »

Recommended Level: 45
Region Location: Cleigne
Entrance: You can only access Pitioss dungeon by using Regalia Type F flying car. What follows are spoiler so be warned. You get the flying car right before the last mission in the game. You will have to go back to explore the previous lands instead of going after the last boss. With flying regalia go to the volcano and look for a small section of road (yellow line on the volcano’s mini map). You can land there if you time it perfectly. After landing follow the path up to the building. Only Noctis can enter it. There are no enemies and it is filled with spatial puzzles. If you need help getting there, check out our guide on How to reach secret dungeon with Regalia Type-F.

Dungeon Locked Doors & how to open them

Many of the dungeons contain mysterious locked doors near the end point. They’re all the same, which probably means they have the same origin. The key to unlock them is obtainable at the later stages of the game. If you’re interested in opening them, take a look at our FFXV dungeon locked door guide.