Ignis Scientia is one of the party members in FFXV. He is not directly controllable, but the player will have the option to issue him commands. Ignis is Noctis’s close friend from childhood. This guide will show you how to change Ignis Attire’s outfit in Final Fantasy XV.

Ignis wears a purple and black patterned dress shirt combined with the black suit and black red-soled shoes with crystals at the tip. He also wears silver driving gloves, as he is the group’s driver and chef. He takes the wheel of the party’s car unless the player wants to drive manually as Noctis. He wears glasses and has short, light brown hair swept up at the front of his hairline. Just like all of the party members, he has some skull-motifs on his outfit. He has a skull on his belt buckle.

Note: This information was obtained from the Judgement Disc demo of the game and we suspect that the full game will have more attires and outfits for you to acquire. 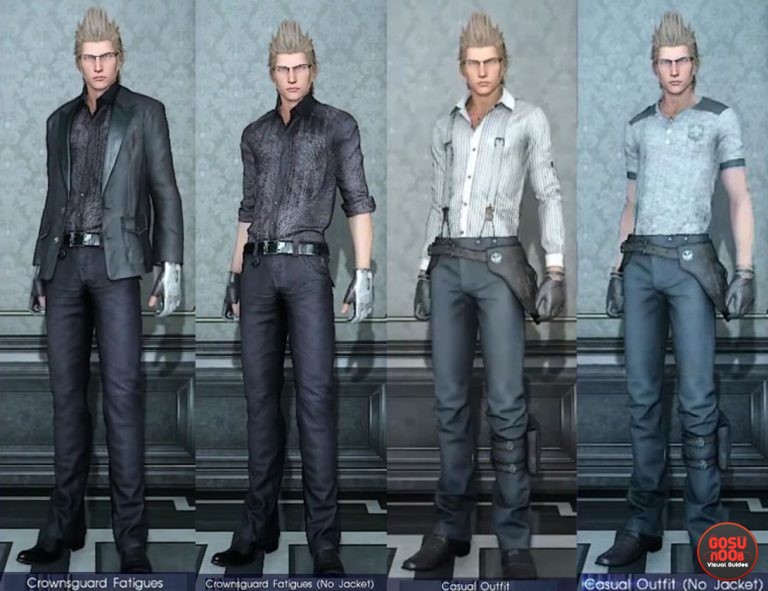 How to change Ignis appearance / outfit

Ignis will have alternate outfits available. From the main menu of the game, choose Ignis, and navigate to the Attire tab that is located in the lower left corner of the screen. When you select this option, an additional menu will appear with the outfits that you are currently holding in possession. Select the desired attire, go back to the game, and Ignis will appear in new clothes.

When you obtain a new outfit, you will have the possibility to change his attire during the course of the game at any time (except during combat).

Crownsguard Fatigues is the default Ignis attire. He will wear the black suit and black pants with gloves. Bonus: Increase HP.

It is the same attire as the original, only without the black leather jacket. Bonus: Increase Strength .

Casual outfit is in contrast with his main clothing, since he is wearing a white shirt in combination with blue jeans with suspenders instead of a jacket. Bonus: Increase Resistance .

It shows Ignis in his gray and white shirt, with some dark patches on the shoulders. He wears gloves with all his outfits. Bonus: Increase Critical rate .