Magic Flasks are items in Final Fantasy XV. They’re containers, used to store spells after you craft them. You start with only one, but as you progress through the game, you’ll want to gather as many as you can. Having elemancy bombs at the ready is a great bonus, so you’ll want to stock up on them. The problem is, they’re pretty rare. You won’t find them just laying around. Instead, you’ll have to work hard for each and every one. In this guide, we’re going to show all Final Fantasy XV magic flask locations. 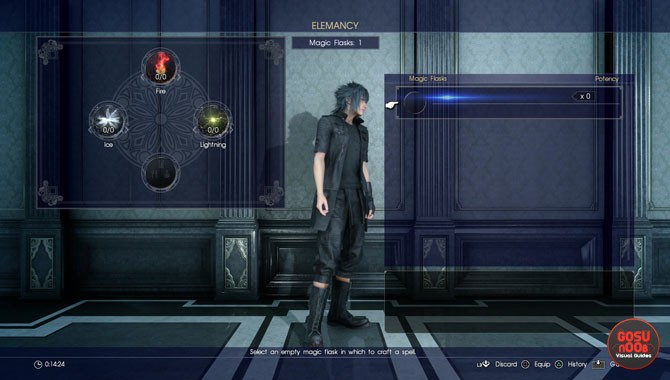 UPDATE: You’ll start with one. You’ll get another one while doing the Pauper Prince quest for Cindy in the first chapter. She’ll ask you to kill some pests, and you’ll meet a hunter that was trapped in an abandoned shack. Ask him for a reward, and he’ll give you a Magic Flask.

The third one can be obtained during the main quest as well. Durin the Legacy quest, you’ll meet Monica at the Prairie Outpost. She’ll tell you to go meet Cor, and give you another flask.

The fourth flask is obtained by finishing the Burden of Expectation quest, which ends once you meet Iris in Lestallum.

You can find one in the Fociaugh Hollow dungeon, while searching for Ramuh’s totem in the Trial of Ramuh quest.

There’s another one you can find near Cape Caem, an outpost in the southwest of the map. There’s a ligthouse there, south of the outpost. The flask is in the house you’ll pass before the lighthouse. You can find in on the floor in the kitchen.

There’s another one near Cape Caem lighthouse. It’s on a cliff near the large house. You’ll find a gravestone there – interact with it, and you’ll receive a flask.

You can get a flask in Lestallum, near the main road. It’s on the ground in an alley leading away from the road.

There’s also a flask at Galdin Quay, by the sea. It’s next to the pier with the fishing spot, but it only appears later in the game. We found it after we’ve completed the main story. It was also after Navyth moved to Galdin, in the later stages of the fishing quest.

One of the flasks is located in the Steyliff Grove dungeon. It’s on the first floor, in the room near the end of the long corridor that leads to the lower level. It’s right before you have to squeeze through a crevice. You can find one in the locked part of the Rock of Ravatogh dungeon – just make sure you exlpore it fully, since there’s no map. The last flask is hidden in the depths of Pitioss dungeon.

ORIGINAL TEXT: Magic Flasks are round containers that are supposed to be filled with magical energy. When you craft a spell, it will go into a magic flask. Once you’ve crafted it, the spell will basically act as a grenade – you won’t pay any price when using it, and the flask will be returned to your inventory. You can then re-use the empty flask to craft another spell. Since crafting spells takes time and concentration, you won’t be able to do it in battle. Hence, the more flasks you have, the more use you can get out of magic.

You’ll start the game with only one of these precious, spherical containers. In order to get more, you’ll have to work hard. You’ll sometimes receive them as quest rewards from grateful characters. You might find them sittig at the end of a dusty dungeon, guarded by horrible creatures traps. There’s also a chance you’ll be able to spend gil to acquire them, but we doubt this will happen. They’re too precious to be traded for money.