Noctis Lucis Caelum is the main protagonist of the FFXV game. The Crown Prince and heir to the kingdom of Lucis is dressed in black leather by default, but during the course of the game you can change Noctis attire / outfit in Final Fantasy XV.

At the start, he is wearing a black jacket with skull buttons. He is keeping it unzipped and on the the zipper he has a small skull symbol. Under the jacket, he is wearing a gray shirt with some skull prints over it. As for his pants, Noctis is wearing black cropped trousers and high black boots with red soles. He wears only one black glove, the one on his left hand.

Note: This information was obtained from the Judgement Disc demo of the game and we suspect that the full game will have more attires and outfits for you to acquire. 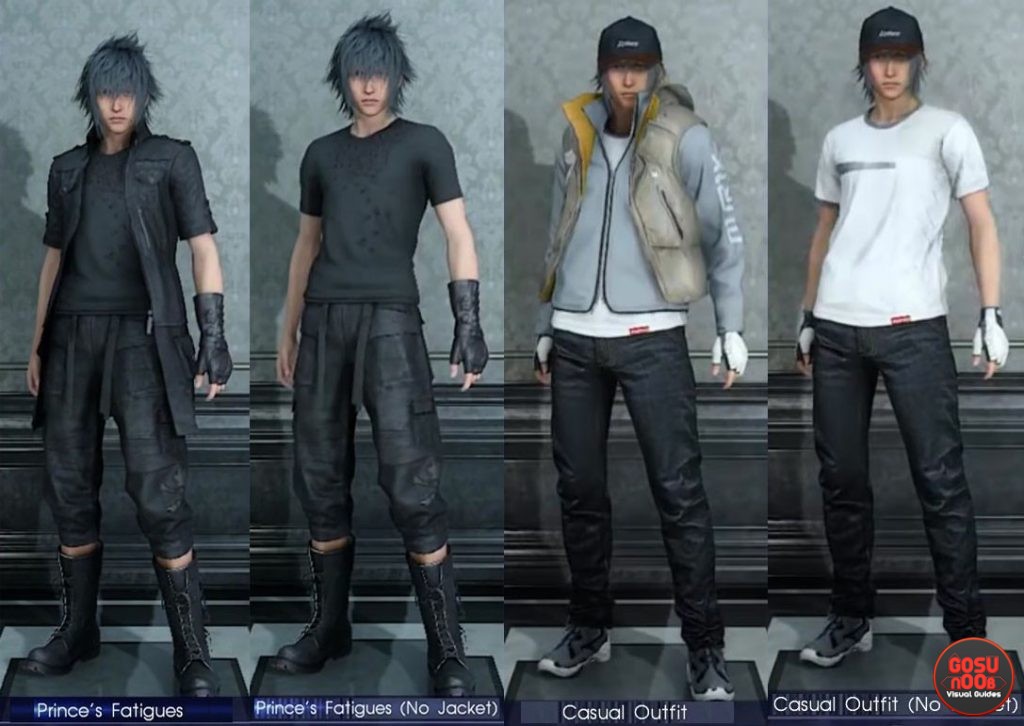 How to change Noctis appearance

Noctis has alternate outfits available. From the main menu of the game, choose Noctis, and navigate to the Attire tab that is located in the lower left corner of the screen. When you select this option, an additional menu will appear with the outfits that you are currently holding in possession. Select the desired attire, go back to the game, and Noctis will appear in new clothes.

When you obtain a new outfit, you will have the possibility to change his attire during the course of the game at any time (except during combat).

Prince’s Fatigues is the default outfit of the Lucian prince. It is designed to protect the heir to the throne. This attire is the standard for Noctis. Bonus: Increase HP .

The attire without the jacket shows Noctis wearing a black t-shirt with short sleeves, but the rest of the appearance is the same. Bonus: Increase Strength .

This attire has Noctis wearing a gray jacket in combination with white gloves, a hat and sneakers. Bonus: Increase Resistance .

Casual Outfit (No Jacket) is the most casual of all the attires, here Noctis wears the casual outfit without the jacket, as he is shown only in his white-grayish shirt with short sleeves. Bonus: Increase Critical rate .