Jules, Kit and Ocean are new bosses in Fortnite Battle Royale. They were added in Season 3 of Chapter 2, and they all reward you with vault keycards and mythic weapons. These weapons are unique, which means only one can exist in each match, and they’re pretty powerful. If you’re wondering where to find these uberhenchmenschen, this guide will show you all boss locations in Fortnite – Jules, Kit & Ocean, so you can get those sweet mythic weapons.

Kit is one of the bosses added in the new season. It’s a robot that’s being piloted by a kitten. A formidable opponent with a bunch of henchmen (or henchbots) to back it up, you’ll find it in Catty Corner. When you kill it, it’ll drop a keycard that allows you into the local vault, as well as a pair of mythic weapons – a shockwave launcher and a charge shotgun. The former allows you to rocket jump and push enemies away, while the latter shoots a devastating but slow-to-charge burst of lead. 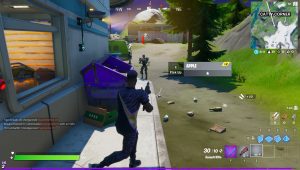 Ocean can be found in the floating fortress of Fortilla. She has the help of a bunch of ghost henchmen, and she usually hangs out on the platform with the red carpet. She can swim, too, so don’t think putting water between you makes you safe. When you’ve dealt with her, you’ll get the Fortilla keycard, which opens the nearby vault, along with the mythic chug jug, which replenishes itself automatically, and a mythic burst assault rifle.

Jules the engineer can be found hiding out at the pirate fortress at The Authority. She’s aided by a number of shadow henchmen, but the terrain is pretty favorable there, so you shouldn’t have any problems dispatching her. Once the fight is over, you’ll get the Authority keycard, which lets you access the vault, as well as a mythic drum gun and glider gun. The latter is a basically a grappling hook with infinite uses.

NEXT POSTFortnite Season 3 Has Started, On A Half-Flooded Map And With A Cool New “Vehicle”