The Moon-Bathed Deep world quest in Genshin Impact is extensive and will take you across many parts of this island, and one of these will require you to break the Fin Seal. We’ve already covered other parts of this quest, so if you are having problems breaking the Eye of Watatsumi or the Tail of Watatsumi seals, you should read our guides that explain how these are done. And if you have already solved these, then you know how tricky these puzzles can get. This Break The Fin Seal Genshin Impact guide covers the Fin of Watatsumi section and shows you how to solve it. 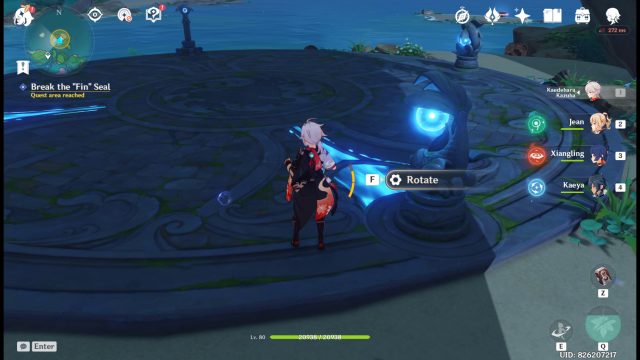 How to Break The Fin of Watatsumi Seal Shrine Genshin Impact

The so-called Fin of Watatsumi is located on a small island north of Watatsumi Island. When you get here, you will see a shrine with a stone tablet next to it. Read this tablet. Next, turn around and go to the puzzle on your left. We’ve marked the precise order in which you need to rotate all of these mechanisms on the screenshot directly below. When you have rotated all three of these mechanisms in the correct sequence, pay your respects at the statue. Once you have successfully done this part, you will be able to move on to the other puzzle to the right. Go there.

This part is much easier, since you need to rotate just one mechanism. Like before, we have marked which of these you need to manipulate, as well as how many times, on the screenshot directly below. After completing this second puzzle, you will be able to go back to the shrine to obtain the Spirit Pearl on it, since the seal has now been successfully broken and the way is clear. And that’s how to Break The Fin Seal Genshin Impact.