The Genshin Impact version 3.1 update is now available. And it comes filled to the brim with new characters to play, zones to explore, items to obtain, and enemies to defeat. Of course, the new characters also come with new storylines in order to know them better. One of the new World Quests, “Afratu’s Dilemma”, has players particularly confused. Namely, they are not sure how to complete the “Find a Way to Enter The Robot” part. Read on the learn everything you need about it and how to “dodge the beams” in the Genshin Impact 3.1 update. 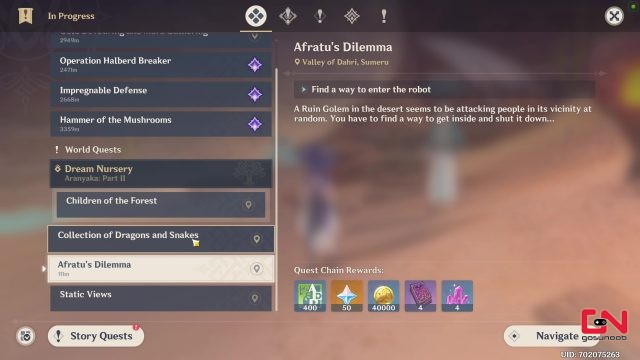 How to Find a Way to Enter The Robot Genshin in Impact 3.1 Update

Immediately after you speak with Mahamata Afratu, the researcher, you will kick off the “Afratu’s Dilemma” world quest. And the very first task for you will be to “Find a Way to Enter The Robot”. There’s a Ruin Golem in the desert that is randomly attacking innocent people in the Valley of Dahri. And we need to find a way to stop it and shut it down. This task has many players confused as they are not sure what they need to do.

The quest marker brings you to a quest area with a Ruin Golem striking you with beams. But, what to do from there? Well, you will need to simultaneously dodge the beams and guide the robot to shoot at the rock formation to the right. Scan the area to see exactly which rocks need to be destroyed. The flying attacker will need to destroy several rocks there. And, once all the rocks are destroyed, an entry will appear behind them. Now simply continue through the entrance and you’ll start the next part of the task, “Explore up ahead”. With that said, our “Find a Way to Enter The Robot” guide is completed.

Like the first game, Hello Neighbor 2 is full of secrets to uncover and puzzles…

The 2022 Merge Mansion Christmas event is upon us, so players want to know what…