Genshin Impact patch 3.0 called Sumeru dropped and brought a lot of new content, including the quest Silent Seeker of Knowledge that requires you to investigate the courtyard far down the corridor. Quest is at the very beginning of the new content area. Many seem to be stuck on this step. You’ll need to use a new game mechanic that wasn’t used much previously in the game. That is why both veterans and newbies don’t know how to progress further. We’ve discovered what needs to be done to unlock the next step in the quest. Continue reading how to get past investigate the courtyard far down the corridor quest step in Genshin Impact Sumeru 3.0 update. 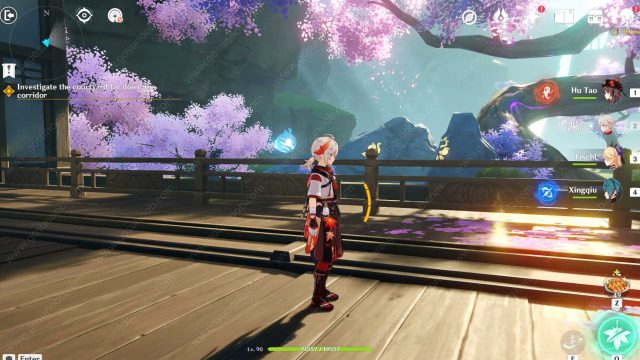 Silent Seeker of Knowledge is one of the quests you get after entering Sumeru. You’re learning about the new element Dendron and its Archon. Quest takes you to find researcher Haypasia. You’ll get a taste of what traversing Sumeru really is about. As you try reaching the upper level of the tree hollow you’ll be jumping on mushrooms like Super Mario or whip around like Spiderman. At several points of the quest the player gets teleported from the tree to some buildings. At one point, when teleportation happens, you’ll be asked to investigate the Courtyard far down the corridor. There’s a little light shining on the floor of the balcony at the far end of the room. When you step on it nothing happens and there’s no interaction prompt.

To progress further and actually investigate the courtyard far down the corridor you need to look at the nature beyond the courtyard. If you look carefully you’ll see two rocks with two yellow rune-like signs on them. Rotate your camera, while standing on the light on the floor, until the runes on the rocks line up. You should see a flower sigil on the rocks once properly aligned. At that moment the quest will automatically progress to the next step. You’ll be tasked with investigating the corridor on the other side. You’ll come across similar puzzles in Sumeru. Make sure to look for runes in the surroundings. Lining them up might be the way to progress further. 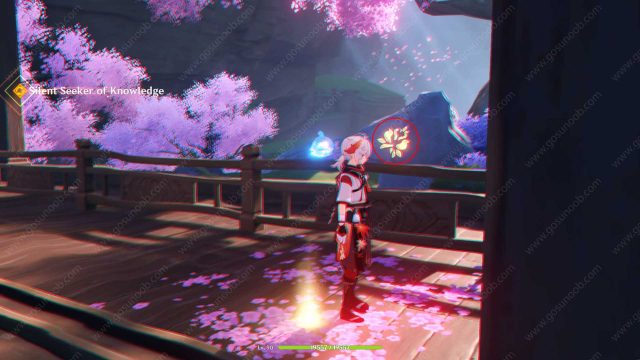