Sangonomiya Kokomi is the newest character that’s coming to Genshin Impact, and we have the exact date & time for her banner release. This 5-star, Catalyst-wielding Hydro character has been a long time coming to the game, and no doubt many players can’t wait to get her on their team and play with her. Our Genshin Impact Kokomi Banner Release Date & Time guide will tell you everything you need to know about this character, as well as when you can expect to get her in the game. 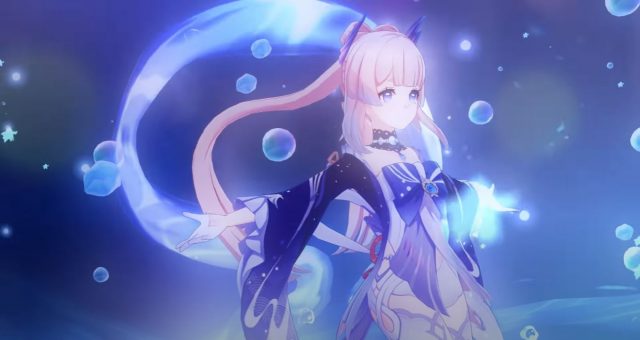 When Does Kokomi Banner Start in Genshin Impact

Sangonomiya Kokomi’s banner will start on September 21st 2021. You will be able to obtain her during the Event Wish – Drifting Luminescence, which starts on that date. Her two titles, Divine Priestess of Watatsumi Island and the Hibernating Homebody Strategist, hint at her personality and role in the game. She has a negative -100% CRIT rate, but to compensate for that she comes with a healing bonus. Naturally, her abilities are all Hydro-based. Her normal attack is called The Shape of Water. Her Elemental Skill’s name is the Kurage’s Oath and it creates a Bake-Kurage which heals her allies. Kokomi’s Elemental Burst is called Nereid’s Ascension. Finally, her Princess of Watatsumi passive ability allows her teammates to last longer in the water by reducing the stamina consumption rate when swimming.

As we correctly assumed, one of her Ascension Materials is the Sango Pearl. We hope that you have taken our advice then and started farming this pearl on time so that you will be able to quickly reach her max Ascension level. And that’s all there is to the Genshin Impact Kokomi Banner Release Date & Time. We know that you will enjoy playing this new character. Happy gaming, and stay tuned to GosuNoob for more Genshin Impact-related guides and news.

NEXT POSTLost Judgment Early Access Not Downloading on PS4 & PS5