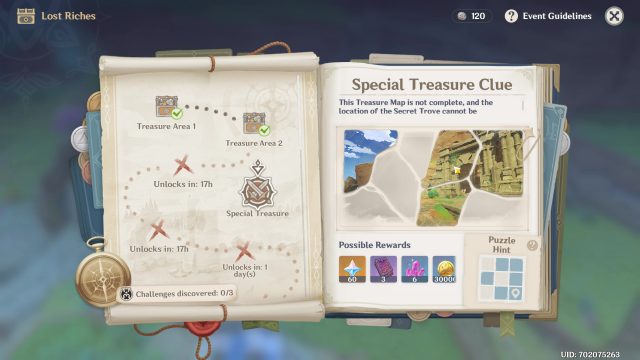 We’ve already covered the Lost Riches Event and how it enables you to get a Mini Seelie Pet, but to recap – in this event, you will be able to uncover buried treasure using your treasure-seeking Seelie. There are 14 treasure areas, with 2 new ones getting released each day. Besides the 14 areas, there will also be 2 Special Treasure areas. Solving these is very much worth it, since each of these will award you with a whopping 60 Primogems, and other rewards. Today, we will tackle the first of these.

The first Special Treasure area is in Araumi. So, teleport to the waypoint there, and head northeast. Once you are in the correct area, you will receive a notification that will inform you that you are near the Secret Trove. Also, it will likewise urge you to take out your treasure-seeking Seelie. Do so – select the Seelie from your gadget inventory tab and equip it. The Seelie will guide you to a spot where you need to dig. After you have done so, you will dig out a special mechanism. Step on it and it will begin the puzzle. To solve this puzzle, you have to step on the stone tablets and light them up according to your own puzzle clue (in the lower right corner) in special treasure hint. We’ll show you step-by-step process in our video below, but don’t forget that you maybe have different puzzle clue.

The first special treasure you’ll find on the Narukami Island. Go north-west between Araumi and Grand Narukami Shrine. Use your Treasure Seeking Seelie. Once you dig up some sort of device step on it, and light up the stone tablets according to your own map that can be seen as a Puzzle Hint on your Lost Riches Event list.

Special Treasure Clue #2
The second Special treasure is hidden to the westernmost part of the map on the Yashiori Island. In the gallery below you can find exact location, as well as some combinations that will unlock your treasure.

NEXT POSTConvert Valorant To Splitgate Sensitivity