Treasure Lost, Treasure Found is a side quest in Genshin Impact. It starts when you talk to Soraya, an NPC by the side of the road in the Guili Plains, at Qiongji Estuary. The quest requires you to find several objects, but their exact locations aren’t revealed – only the general area you should look in. If you’re having trouble finding the stone tablets or the ruins, our Genshin Impact Treasure Lost, Treasure Found side quest guide will help you.

For the first step, you’ll have to find five stone tablets at the Guili Assembly ruins. Once you approach the tablet, press the appropriate button to investigate it. You’ll note down the writing and the tablet will count as found. They’re pretty easy to reach, once you know where to look. 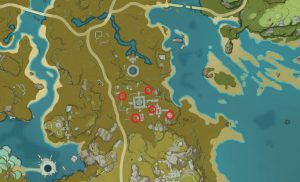 Once you’ve found all 5, talk to Soraya again to start the next step.

Search for the stone tablets

The next step requires you to find two more stone tablets, each at a different location. You’ll find the first one to the west, in the ruins by Luhua Pool. It’s in the mountain pass, next to the chest guarded by a group of enemies. The other one is at the ruins in the hills south from Soraya. You’ll need to burn the vines blocking the entrance. 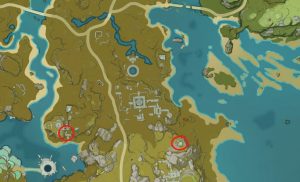 Talk to Soraya again and she’ll disappear. You’ll find her at the Wangshu Inn, which is where she’ll give you the next task.

You need to find four ruins, and investigate the strange jade plates in them. The first one is on the coast south of the Inn – you can glide there. The second is on top of a cliff at the ruins by Luhua Pool, and you’ll need to burn some bramble to reach it. The third ruin is in the hills east from the second one, while the fourth is on the eastern shore of Guili Plains, a bit northeast from where you first talked to Soraya. 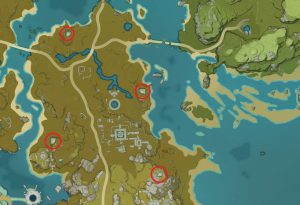 After you’ve talked to Soraya again, she’ll send you off to find the final ruin. This one’s in the middle of the Guili Plains, by the round pool. Once you activate it, you’ll have to fight some big robots before you can drain the pool and get your treasure. 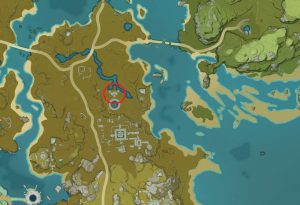