Tree Who Stands Alone is a side quest in Genshin Impact. You can start it by talking to the ghost next to the notice board in Mingyun Village. He’ll start talking in riddles, and it’ll be up to you to make sense of his remarks. It involves finding clues that will lead you to a buried treasure, but the game doesn’t mark the precise locations – just the areas you should look in, which are sometimes pretty big. This guide will show you the exact locations you need to investigate in Genshin Impact Tree Who Stands Alone side quest.

After you’ve talked to the ghost, you’ll get a giant objective circle on the map, covering the entire village. This is the hardest part of the quest, since there’s really no pointers as to what you should investigate. Check out the notice board for more info, then turn around and head into the shack by the edge of the cliff. You’ll find a book inside, mentioning lost notes. This will activate the next step.

Look for a will

In the next step, you’ll have to find four pieces of will. You’ll get four new objective circles on the map, much smaller in size this time. All of the pieces are in various caves and mine shafts, and you shouldn’t have trouble finding them. The pieces are represented by scrolls, so you might pass by them unknowingly – keep your glued to the floor and watch out for the recognizable sparkles.

Once you have the will, it’s time to dig up the tresure. Again, you only get a general pointer, but it’s more than enough. If you’ve read the dialogue and notes, you’ll figure it out immediately. The treasure is buried under the big, gnarled tree with red leaves, on the top of the hill. You’ll have to fight a group of treasure hoarders before you can get it, though. 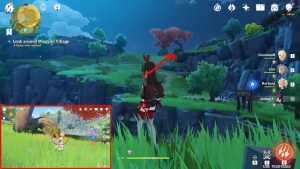 NEXT POSTSpiral Abyss Genshin Impact – How to Get to Musk Reef