Tree of Dreams in Genshin Impact Sumeru update, or Sumeru tree as it’s popularly called, is the place where you offer Dendro sigils and to access it you first need to unlock the region it is in. It is similar to the Sacred Sakura Tree we saw in Inazuma region. As you enter the new zone you’ll see that most sub-zones are active, except for one dark section of the map. If you venture there you’ll see there’s nothing to do there. You’ll first have to do two long quest chains and that’s when the Vanarana region becomes available. That is also where the Sumeru tree is at and where you go to offer Dendro Sigils. To help you unlock Sumeru tree of Dreams in Genshin Impact 3.0 update we’ve compiled this short guide. 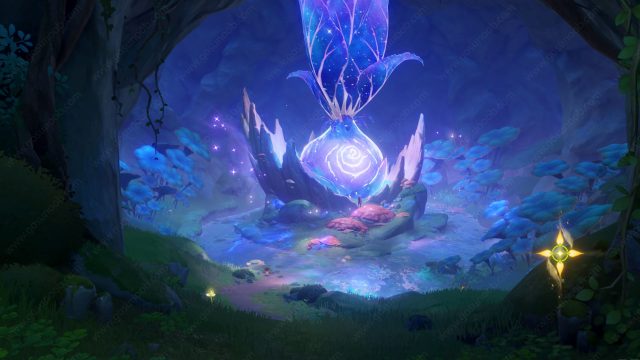 How to Unlock Vanarana and Sumeru Tree of Dreams to offer Dendro Sigils?

To unlock the Sumeru tree you need to complete two quests. The trick is finding where and how they start. The first thing you have to do is complete Rana’s questline. You can see a map screenshot bellow to figure out where it starts. You’ll begin “Aranyaka: Part I” after talking to saving and talking to Rana. This is a long questline. You’ll be clearing withering zones, making a visit to Vimara Village, saving children and doing whatever else heroes do. Along the way you’ll be sent to Vanarana and help Aranara as part of “Aranyaka: Part II”. You’ll even be able to visit the Sumeru tree, but it won’t activate until the questline is complete.

For helping Aranara during the quest The World of Aranara you get a book called Aranyaka to document your adventures with Aranara. More importantly you then get two new quests. One of these is called “Trees and Dreams” and you need to select this as your active quest. You’ll find it in your quest log under World Quests. Trees and Dreams takes you to Sumeru Tree of Dreams and unlocks offering Dendro Sigils in exchange for precious materials. You’ll get upgrade materials and weapon and equipment crafting pieces for each level of the Sumeru tree.