Your character in Ghost of Tsushima can wear a great many outfits and armor sets. They’ll change the way Jin looks, but that’s not all – they’ll also affect his stats, making him stronger, more silent or resilient. You’ll get some while playing through the main story, but others are hidden away behind optional activities, like side quests and mythic tales. This guide will show you a list of all armor, outfits and attire in Ghost of Tsushima, what they look like and how to get them.

Don’t make the mistake of thinking you’re stuck with the predetermined designs – the game allows you to customize pretty much every part of your gear. You can change colors, styles and more – if you want detailed info on how the whole system works, check out our guide on Ghost of Tsushima customization.

The Traveler’s Attire is the first outfit you can find in the game. While you’re going towards Hiyashi Springs, to ask around at the inn, you’ll meet a merchant by the road. Talk to him – he’ll recognize you and give you the armor as a gift. 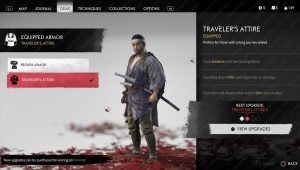 Traveler’s Attire allows you to track artifacts with the guiding wind, clears 10% more fog of war when you travel, and makes the controller vibrate when you’re within 30m of an artifact.

You can get the Samurai Clan Armor outfit from the armorer in the Golden Temple, during the Tale of Lady Masako. It will reduce the damage you take, increase your health and grant more resolve when you get hit. 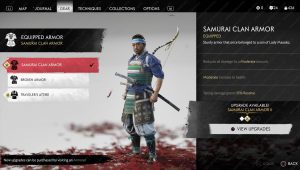 The Ronin Attire is a reward for completing the Blood in The Grass main quest. It’s an outfit that reduces enemy detection speed, increases melee damage and the time enemies need to detect you after you leave pampas grass while crouched. 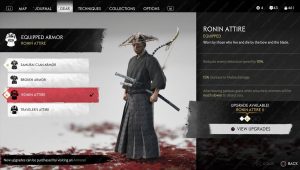 You’ll get Tadayori’s Armor by completing the Legend of Tadayori mythic tale. Wearing it will increase your nocking and reload speed, give you more concentration time and make headshots restore a percentage of the concentration meter. 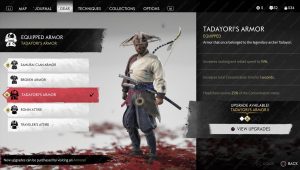 The Sakai Clan Armor is obtained during the Ghosts from The Past main quest, before you face off against the Straw Hats at the estate. It will increase your melee damage and health, as well as the standoff streak. Winning a standoff with it has a chance to terrify nearby enemies. 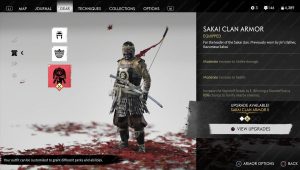 You’ll get the Ghost Armor when you start the main quest called From the Darkness. Wearing it will reduce enemy detection speed, as well as the number of kills needed to enter the Ghost stance. Each kill will have a chance to terrify nearby enemies. 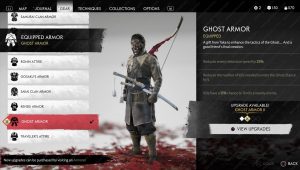 You can get the Mongol Commander’s Armor by completing the Fit for the Khan side quest. Once you’ve finished all the tasks, talk to the apprentice in Jogaku and he’ll make it fit. When worn, this outfit increases your health, reduces incoming damage and makes Mongols much slower to detect you out of combat. 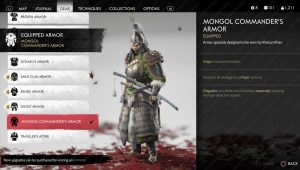 You can get the Kensei Armor by completing the Six Blades of Kojiro mythic tale. Wearing it increases your resolve gain, makes Ghost weapons do more damage and causes enemies stricken by them to deal less and receive more damage themselves. 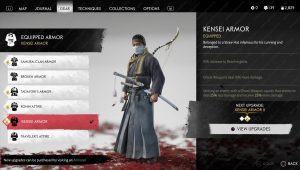 To get Gosaku’s Armor, you’ll have to complete the Unbreakable Gosaku mythic tale. If you decide to use it, you’ll get increased health and stagger damage, and it’ll allow you to restore health when killing staggered enemies. 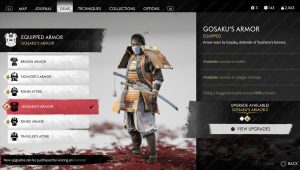 Fundoshi is not actual armor – it’s a pair of cotton undergarments. The description implies Jin favors it when he gets drunk, and it will allow you to run and sprint silently. You can get it by visiting all 18 hot springs. 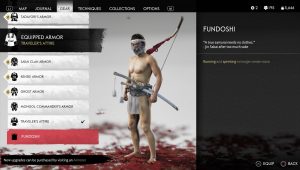 Masks in Ghost of Tsushima

Masks are vanity items that cover the lower half of Jin’s face – his mouth and sometimes his nose. They don’t affect your stats, but they will change the way you look. Here’s a list of all the masks in the game and where to find them:

Helmets are purely cosmetic items, and this category also includes headbands. Here’s a list of all the helmets in the game and how to get them: