Fox dens are locations you can visit in Ghost of Tsushima. They’re usually in a hollowed out tree, and the foxes that live there will lead you to Inari shrines. These are small, hidden shrines, dedicated to the deity of agriculture. Finding an Inari shrine will increase your progress towards unlocking a minor charm slot, or a specific charm. There’s 49 of them in total, so if you can’t be bothered to look for them on your own, keep reading our Ghost of Tsushima fox den locations guide.

Since the foxes are the ones that will show you the exact locations of the shrines, we’ve decided to mark the locations of their dens on the map. The little critters will take over from there. The links below will let you jump to maps of specific areas: 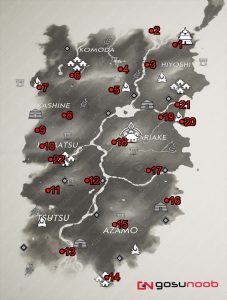 This guide is a work in progress. We’ll update it with more info as we go along.

PREVIOUS POSTGhost of Tsushima Hide A Bow On Jin’s Back