Mother Nature is sometimes a crucial factor in shaping the flow of events in human history. Imagine, if you will, operation Barbarossa without the Russian winter. What would the world look like today if the cold winds didn’t put a freeze on the German panzer spearhead? A typhoon had a similar impact during the Mongol invasion of Japan, which probably would have looked quite different if the unstoppable Mongol horde had it their way. 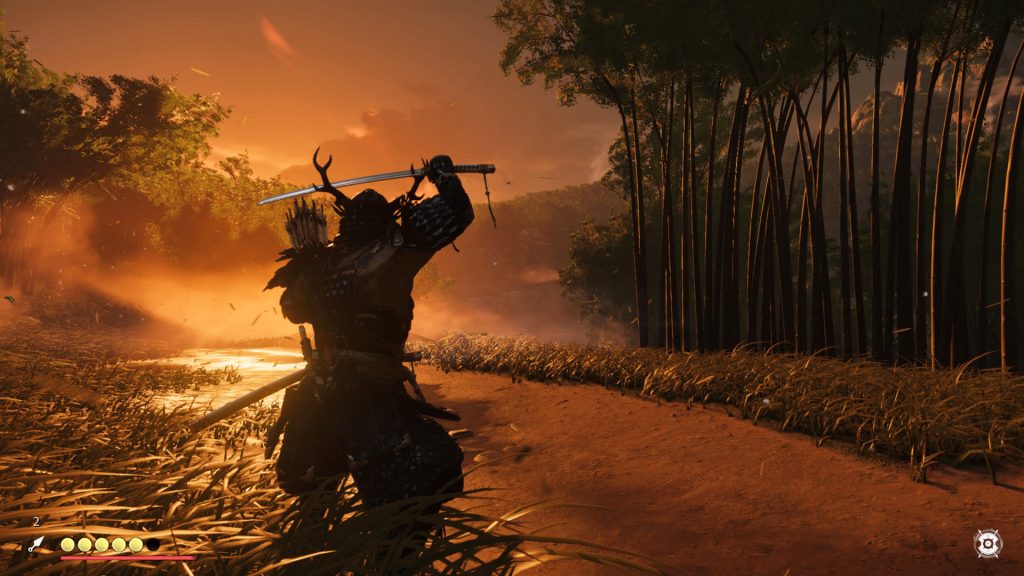 Ghost of Tsushima is a game that tries to explore this, but from a different perspective. It is based on the historical fact that the Mongols had successfully landed on the island of Tsushima, hoping to secure a forward base for the invasion of the Japanese mainland. In reality, the Mongols conquered the island fairly quickly and set sail to Japan proper and faced fierce resistance. Ultimately, they were annihilated by the divine wind while retreating to their bases for reinforcements. That was the end of their first attempt, and the second one suffered a very similar fate. 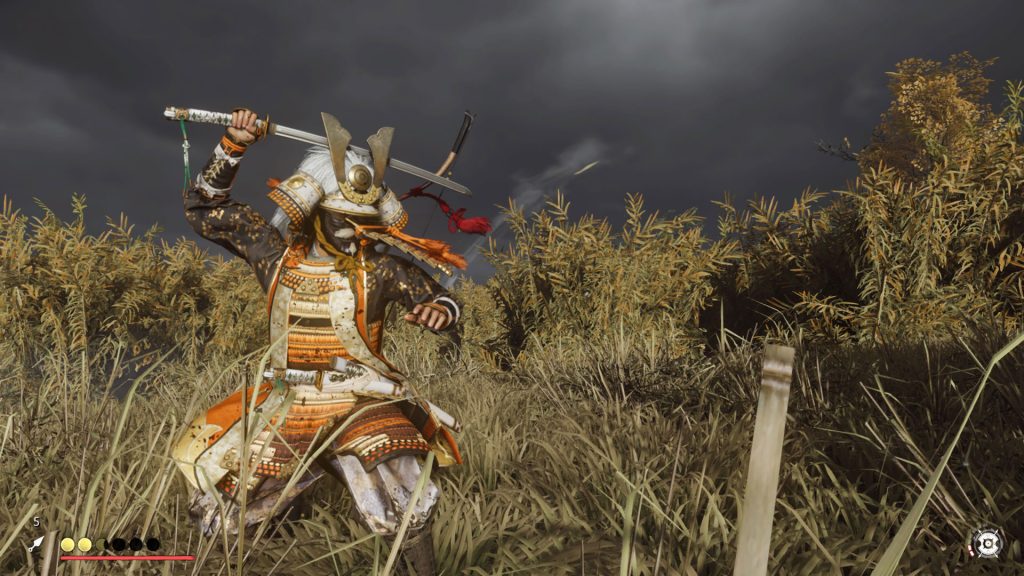 In the game, there’s a force more powerful than a typhoon; the one-man guerilla army that prevented the Mongols from consolidating power and launching a full mainland invasion, even if he barely survived his first true combat test. Young Jin Sakai, riding along with his uncle lord Shimura, was one of eighty samurai that faced the Mongol army on the beach. The brave act of defiance against impossible odds ended, predictably, with only two survivors. Shimura got captured by Khotun Khan, Kublai Khan’s ruthless cousin entrusted with leading the invasion. Meanwhile, poor Jin, riddled with arrows and shell-shocked from Mongol artillery, was dragged off the beach and nursed back to health. 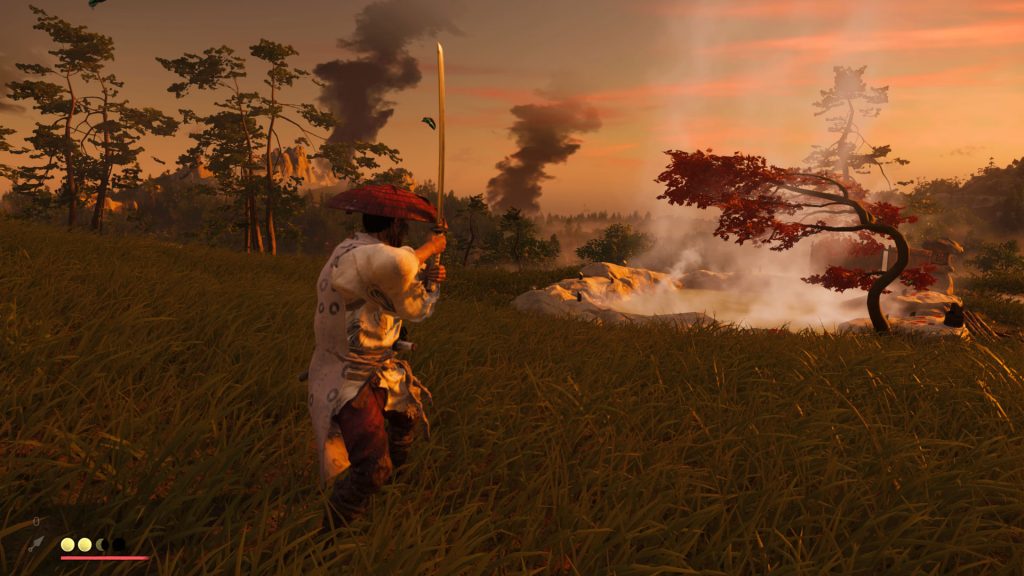 With few allies and no resources, Jin realized two things: surrender is not an option, and he needed to change his strategy. Instead of facing the Mongols exclusively in open combat, like the honorable samurai he trained to be, he would resort to the clandestine ways of the Shinobi. Later in the game, this second decision becomes a point of major friction between him and his traditionalist samurai uncle, whom Jin successfully liberates at the end of the first of three acts.

The game is full of staples and motifs from “samurai westerns” that famous film director Akira Kurosawa made in the sixties. Ghost of Tsushima is forged by melting and fusing equal parts of those movies and ideas and mechanics present in the last few Assassin’s Creed games. There’s open-world action, lots of drama, plenty of combat, intrigue, and a healthy dose of honor, heroism, and sacrifice. 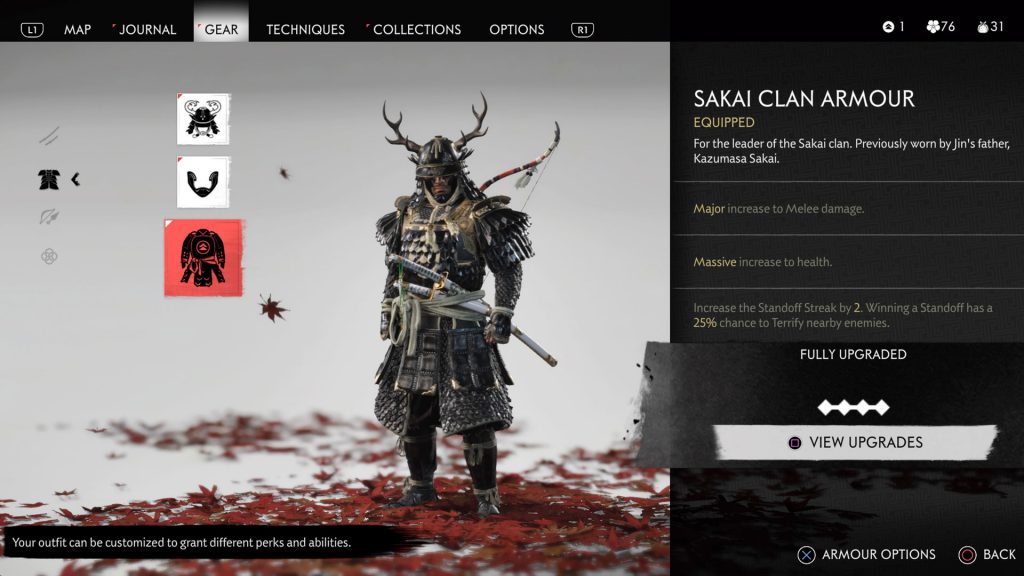 Initially, Jin Sakai is not a combat powerhouse, but evolves into one during his journey. His main weapon is a katana he wields in four different stances he can freely switch between depending on the opponent. For example, the “water stance” is ideal for battling shield-wielding Mongols, as strikes in that “mode” stagger them more quickly and knock them off balance. Pretty soon, he gains access to a bow, and after that, the Bushido conventions begin to fade as he unlocks sets of Ghost weapons. At the start, Jin is uncomfortable with assassinating invaders from the shadows. However, his reservations quickly fade confronted with the efficiency of those methods. Killing powerful enemies one by one with poison darts or a knife in the back is way easier than battling them head-on. 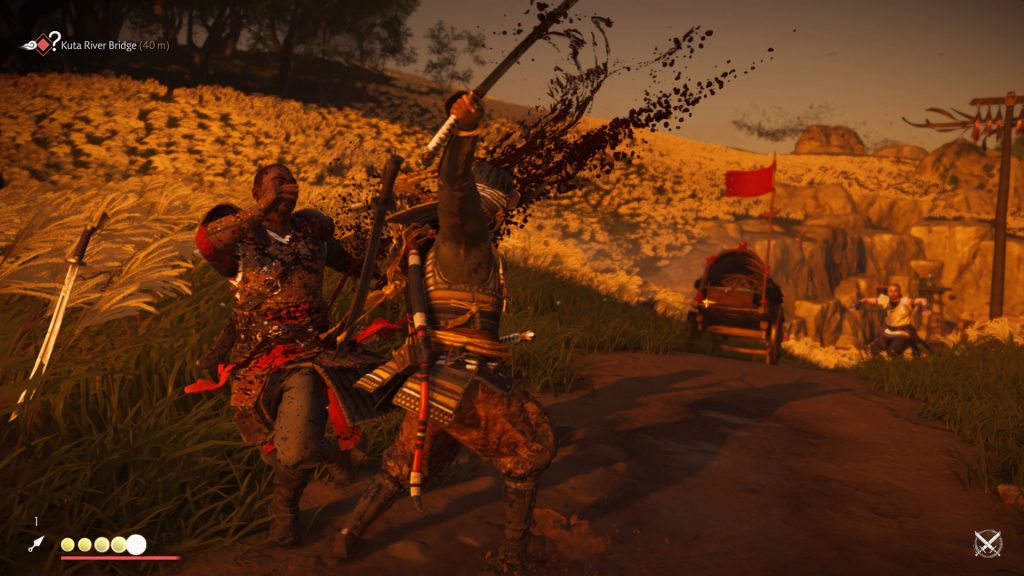 This is a slight problem that lies in the core of the game mechanics. The “samurai” combat is a clever hybrid between Assassin’s Creed, Sekiro, and the Arkham games; it’s dynamic, powerful, combo-based, very brutal, exciting, and more difficult than ghost assassinations. On the other hand, the stealth is underwhelming, and that includes sneak-killing. The enemy AI, very efficient when fighting face-to-face, is impotent if you challenge it from the shadows. Enemies will often ignore obvious signs of your hidden carnage, ignoring their friends’ muffled screams coming from a few feet away.

A Gray Protagonist in a Rich, Colorful World

The island of Tsushima consists of three big parts that unlock one by one as the campaign progresses. It’s full of things to do; there’s optional quests to tackle, terrorized villages to liberate, and fortified outposts to infiltrate. You could focus only on the main storyline, but that way you would miss the best stories that the game has to offer. Some optional quest lines, like the story of the elderly sensei betrayed by his apprentice, are the real tofu in this tasty miso soup. Ghost of Tsushima is also a paradise for completionists who like to root around for collectibles long after the ending credits had rolled. 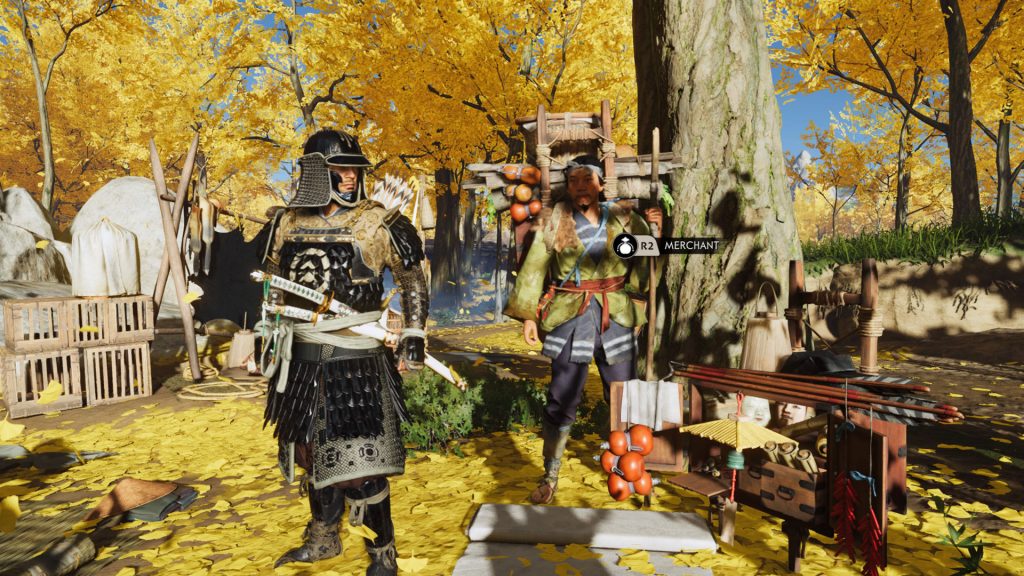 Our ghost samurai stands in sharp contrast with the many colorful NPCs he encounters. Jin Sakai is not a character with many layers, like, say, Ezio Audiotore da Firenze. If we stay in the realm of Assassin’s Creed comparisons, he would be somewhat similar to Ratonhnhaké:ton (also known as Connor), the honorable but quite boring Native American protagonist from AC III. Jin is a reflection of his rigid feudal society; expecting him to be anything else but a driven, focused warrior would be somewhat unrealistic. 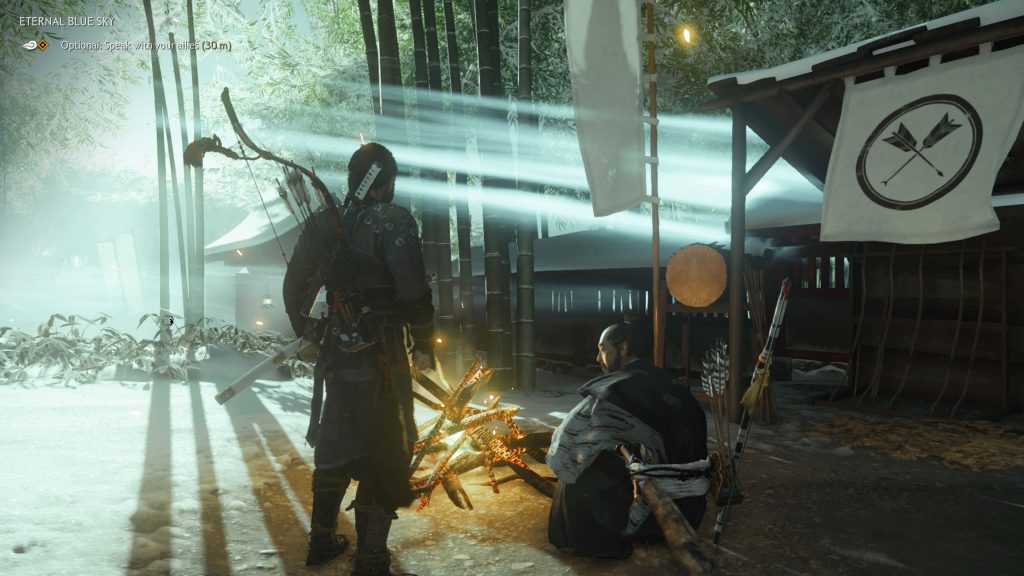 One of few instances in which we can peek into his inner world are the haiku. There are a few special spots in the game with inspiring beauty, where our hero sets aside his katana and starts reflecting on life, collecting his thoughts and constructing poems. He does not crack jokes or womanize – instead, he writes heroic poetry. That sits well with us.

If you can, you should play the game on an HDR-compatible display. The island of Tsushima in late autumn is brimming with golden and bright red foliage, and those colors simply a standard TV set simply cannot reproduce. The game has several PlayStation 4 Pro enhancements; notably, you can select either 4K graphics or 60 fps gameplay. We can’t wait for the PS5 to have both at the same time. 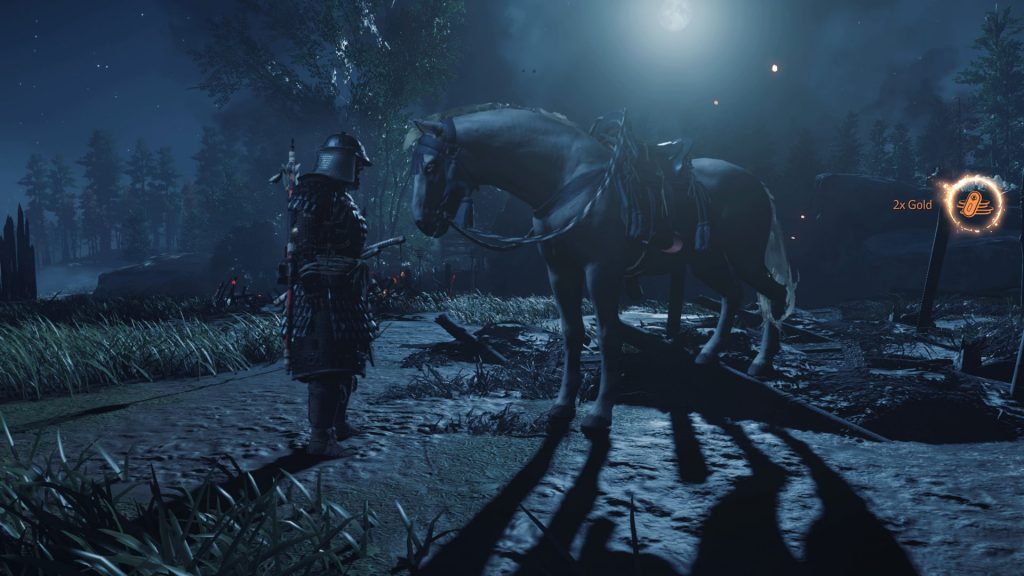 Ghost of Tsushima is the last big exclusive for PlayStation 4. It is only fitting that this fantastic console gets sent off with a bang. In this case, it’s a smoke bomb, katana slash, and samurai freedom cry. The game is not perfect – its stealth mechanics are fairly basic – but the overall quality of its other elements and the unbeatable charm of authenticity outweigh that shortcoming.

PREVIOUS POSTCarrion Gets Animated Launch Trailer, Showing Off the Chaos