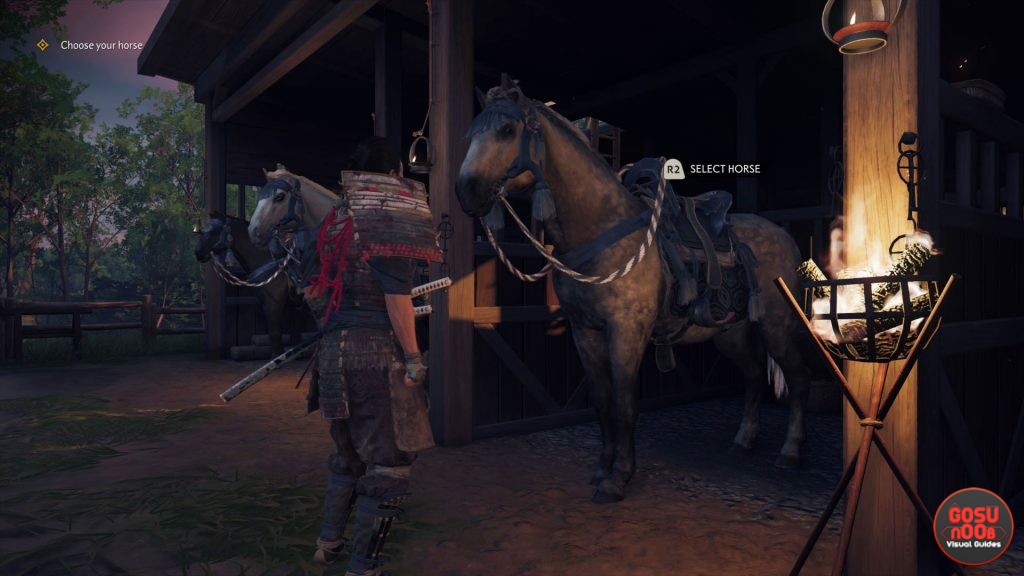 The Best Horse to Choose in Ghost of Tsushima?

Which horse you choose in Ghost of Tsushima depends entirely on your aesthetic preferences. At the beginning of your adventure, the game will take you to a stable, where you’ll have your choice between a white horse, a black horse, and a dapple horse. I can tell you right away that we conducted tests and there are no hidden benefits to either choice. It comes down to which horse color pleases you the most and the choice has no effect on gameplay. Horses are a method of transportation; nothing more, nothing less.

The game throws you another curve-ball. You are asked to choose the name for your new horse. Your choices are Nobu, Sora, or Kage, which, in English, mean Trust, Sky, and Shadow, respectively. Having lots of RPG elements you might think that different horse names in Ghost of Tsushima might have some effect on your horse speed or stats. Turns out it is just a stylistic choice. So, all you have to do is pick the one that you think is the coolest and be on your way. It doesn’t affect gameplay in any way, it just gives you a bit more of a connection to your noble steed.

The Digital Deluxe bonus horse in Digital Deluxe appears in the first stable that you’ll come across. If you’ve purchased the Digital Deluxe edition of the game, instead of the usual three horses, there will be four. The fourth, brown horse is the bonus one. It even has a little yellow icon above it, so there’s no way you can miss it. 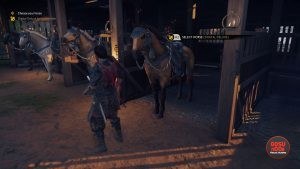 Moreover, if you attempt to take one of the usual three horses, the game will alert you to the fact that you can take the bonus one instead. When you select it, you’ll also get to give it one of three preset names. So, select the horse, give it a name, and continue on your adventure.

What is the Fastest Horse in Ghost of Tsushima?

According to the tests we’ve conducted, all the horses you get to pick at the start in Ghost of Tsushima have the same speed. We started the game three different times and ran the same route with different horses. We timed all that and it turns out all the horses had the same time. You can see the results of our test in the video on our youtube channel. You might want to subscribe while you’re there.

Can You Customize your Horse?

Yes, you can customize your Ghost of Tsushima horse. However, as far as we can tell, the options are fairly limited. Aside from the color and the name you get to pick at the beginning, the only other customization we’ve seen is the different saddles. You unlock those by finding the dozens and dozens of Sashimono Banners scattered all across the map. The more of those you find, the more different saddles you get. That said, the saddles don’t really affect anything, aside from looking snazzy. If you pre ordered or bought the deluxe edition of the game you will also get a special looking saddle.

How to Change your Horse?

To change your horse in Ghost of Tsushima, you have to find another stable. Simply approach one of the horses there and press R2 to mount it. You don’t get to name it, though, nor do you really get to keep it. If it’s in range of your whistle, the new horse is going to come, but if you wander too far away from it and whistle, your horse from the start of the game is going to appear. In conclusion, you can temporarily ride a different horse, but in all likelihood you will revert to your starting horse sooner or later.