To get the Kensei Armor in Ghost of Tsushima, you have to find and complete the Six Blades of Kojiro mythic tale. For that, you have to travel to the southwest corner of Toyotama, to the town of Umugi Cove. Just follow the marker on the map to what seems to be some kind of warehouse. There, you’ll find Yamato the musician in some distress, and he’ll tell you the story of Kojiro and the blades (great band name, by the way).

What awaits you now on your journey to the Kensei Armor is basically a series of five boss fights against the Straw Hats all across Toyotama. Just go visit the five swordsman icons on the map. They are a little difficult to spot, so check out the map below for reference. Finding the duels isn’t difficult at all, since they all have very telling descriptions. That said, these fights are no laughing matter; approach every duel carefully. 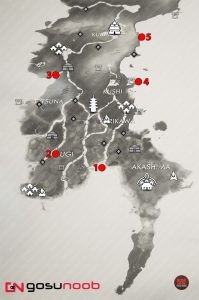 After you defeat these five bosses, head back to Umugi Cove and speak with Yamato again. He’ll be waiting for you in the same place, and he’ll reveal Kojiro’s location to you. So, head north to Mount Omi and the Omi Monastery. Standing face-to-face with the giant Buddha statue in the center, head down the path on the right and squeeze between the rocks and into the cave. Just one more boss battle, and the Kensei Armor is yours.

The rewards we got for killing Kojiro, aside from the Ghost of Tsushima Kensei Armor, were the Kensei headband and the Charm of Unseen Respite. When you equip the armor, you’ll get a 15% increase to Resolve gains, ghost weapons deal 15% more damage, and enemies hit by ghost weapons deal 25% less damage and take 25% more. As for the headband, it’s just a piece of vanity gear and a trophy. It doesn’t serve any purpose higher than that. Lastly, the charm makes smoke bombs restore 25% of your health.

NEXT POSTGhost of Tsushima Hide A Bow On Jin’s Back