Silk, leather and linen are types of cloth in Ghost of Tsushima. These crafting materials are used to upgrade attire and armor, increasing its power. They are mainly given out as rewards for completing side quests, but can also be found in the open world. If you’re struggling to enhance your favorite outfits, this guide, will show you silk, leather, linen locations in Ghost of Tsushima.

How to get Linen

How to get linen is a question many players might ask early on. You’ll get linen as a tale reward, and you can also find it in open world locations. It has a specific design that sets it apart from other satchel collectibles. There are many of them in and around houses. Be sure to check out the upper floors as well, no matter how small they might look. 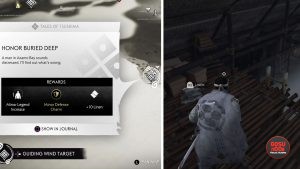 You can also get linen from the gift altar. This option unlocks fairly early on in the game, around the time when you get to Golden Temple. From time to time, it rewards the player with ten or more units of linen.

You’ll get either 10, 14 or 18 linen from tales rewards. You’ll need 60 to max out your outfits, and we ended up hoarding almost 190 by the time we were done with the game.

How to get Leather

A lot less people will be wondering how to get leather, since it doesn’t only come from tale rewards, but is also found in the open world. Leather can usually be found in and around people’s homes. The collectible type of leather has a particular glow, and it’s easy to distinguish it from other collectibles. 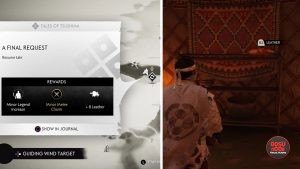 The tales that reward you with leather will give you either four, six or eight units each. To find these tales, be sure to talk with every person that has a text box above their heads. After a short talk, they will reveal a rumored location, that will allow you to find more about the tale, like the rewards it gives. You’ll need 30 leather to get all the upgrades, and we ended the game with 130.

How to get Silk

Silk is the rarest of the cloth types, required only for the best upgrades. You’re probably wondering how to get silk, since it’s so scarce. It’s a time consuming task – you’ll need to complete the tales tied to a specific character/ally. A majority of these tales reward you with two units of silk each. Allies that have these tale chains are Masako, Ishikawa, Norio and Yuna. Yuna has four quests to offer, while others have up to nine. 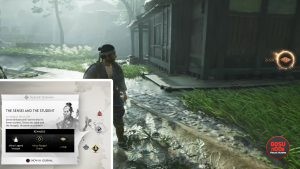 You’ll need six units of silk, which means completing three ally tales. You can check the required number for the armor you have from the inventory, without going to the armorer. Once in the armor section of the gear tab, press square and it will take you to the upgrades screen.