Sword kits are cosmetic items in Ghost of Tsushima. This vanity items will change the way your weapon looks, by giving it a different hilt and scabbard. You can get some of them by completing mythic tales, but most are obtained by visiting Pillars of Honor. If you’re wondering how to get them and what they look like, this guide will show you all sword kits locations in Ghost of Tsushima.

You can get the Heavenly Falcon sword kit by completing the Heavenly Strike mythic tale. You’ll get it automatically at the end, after you defeat the boss enemy in a duel. 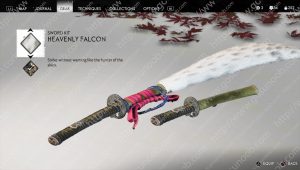 The Omukade’s Revenge sword kit can be obtained by finishing the Spirit of Yarikawa’s Vengeance mythic tale. You can’t miss it – it’s the end-of-quest reward. 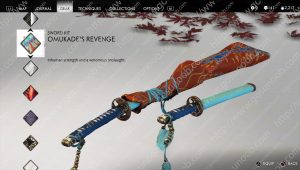 Izanami’s Grief is the last of the quest reward sword kits. You can get it by completing the Undying Flame mythic tale, later on in the game. 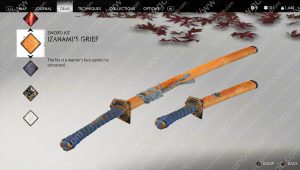 There are seven pillars of honor in Izuhara. Each of them holds a single sword kit, and all you have to do is find it and interact with it. You’ll find their locations on the map below, and if you get stuck, don’t forget to use the wind of vanity. 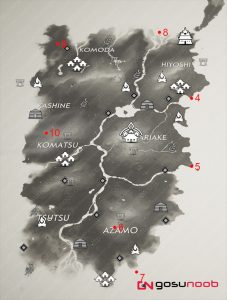 You can find this sword kit in Hiyoshi, on the cliffs southeast from Hiyoshi village, on the north side of the bay. It’s probably the first kit you’ll find, as this is where the game lets you on your merry way after an extended tutorial. 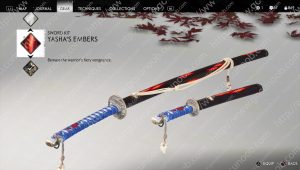 This sword kit is hidden at a pillar in Ariake. You’ll find it at the tip of the big peninsula, overlooking Sibling Rocks. It’s a pretty tame skin, compared to other vanity items, so you can easily skip it if you’re not a completionist. 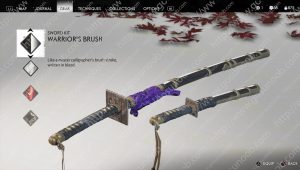 You’ll find the pillar in the middle of Azamo, high up on a cliff between two big rocks. It’s at Sakimori Overlook, and it’s one of the highest places in the province. 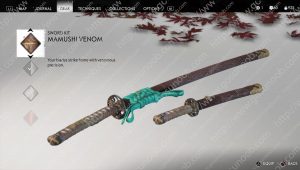 If coating your scabbard in glowing acid seems like a fun idea, then this sword kit is for you. You’ll find it on the southern edge of the map, in Azamo. It’s on Wakou Island, directly east of the fishing village. 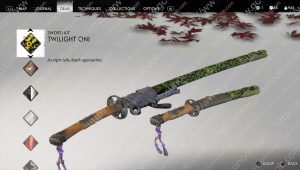 This one’s a great choice for all those who want a more gothic design on their hilt, with jagged edges and spikes on the guard, grip and pommel. You’ll find it next to a pillar of honor at Kaneda Inlet, at the mouth of the river west of the castle. 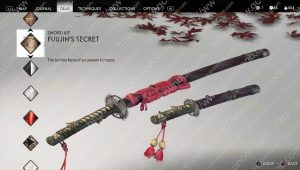 If you like the silvery, serpentine design of this sword kit, you can get it by going to the northwest of Komoda. The pillar is in a scorched field north of First General’s Field, east from Kiyomori’s Landing. 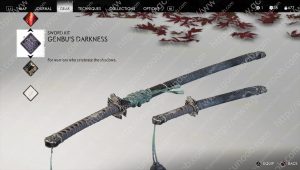 This sword kit with the massive guard and minimalist color scheme can be found between Kashine and Komatsu. You’ll find the pillar hidden in the forest west of Shigenori’s Peak. 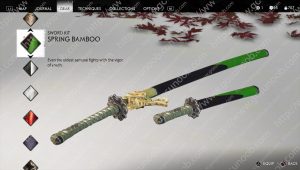 You’ll find nine pillars of honor in Toyotama, and each one will reward you with a new sword kit. The wind of vanity will help you find them, and the map below will show you where to begin your search. 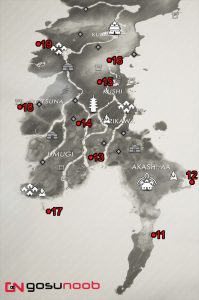 This one has one of those color schemes that will have people arguing for a long time – is it purple or blue? Orange or yellow? If you want to join in on the fun, you can find it on the peninsula in the south of Akashima, on the coast east of the Old Togo Rice Field. 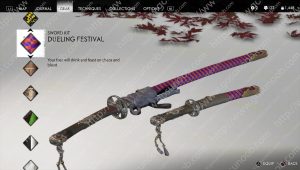 This one’s also in Akashima, on the tip of the tiny peninsula in the east. It has a purple grip and lots of fur on the scabbard, which makes it look like more of an intimate toy than a deadly weapon. 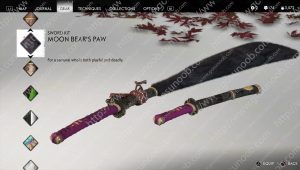 The Breath of Hachiman sword kit is pretty understated, compared to the rest. It has a black scabbard with gold motifs, and red rope around the grip. You’ll find it in the area between Umagi and Akashima, between the rivers, south of Old Kanazawa Marsh. 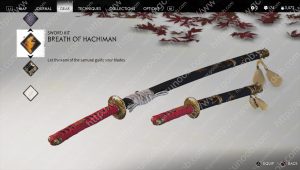 It’s hard to think of yourself as a protector of peasants when your sword is encrusted in gold. Not to mention the impracticality of having a guard made of a soft metal. If you can get over these issues, you’ll find the kit by a pillar on a hillock, in the middle of the map. It’s to the west of Kazumasa’s Isle, south from Old Clan’s Hill. 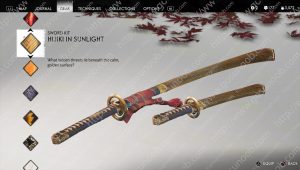 This one’s as cheerful as they get, with a light blue scabbard dotted with drops of white, and a blindingly white grip. It can be found in the bamboo thicket south of Old Toyotama Hills, west of the lake in Kushi. 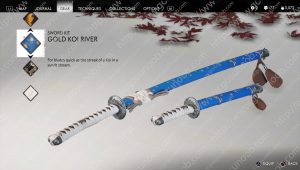 Bishamon’s Fortune has a spiky hilt and a piercing scarlet scabbard, both of which give it a pretty ominous look. If that’s the vibe you’re going for, follow the river north from the lake in Kushi. You’ll find the pillar a bit north of Little Monk’s Pond, on a cliff overlooking the castle. 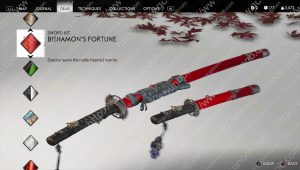 Another one with a golden guard, the Warrior’s Faith is the definition of form over function. You can find it by interacting with the pillar of honor in south Umagi, on the tip of the narrow peninsula southeast from the village. 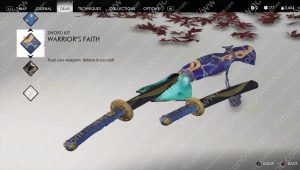 The Hunting Bear sword kit is one of the simple ones, with a black and yellow color scheme and almost no clutter. If you like what you see, you should look for it in Otsuna. It’s in the west, on the coast north of Yoshinaka Bay. 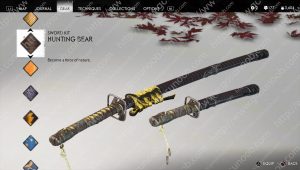 This sword kit is pretty much just a reskin of Spring Bamboo, with a yellow/brown combination instead of green/black. The pillar that unlocks it is on the coast west of the castle in Kubara, in a place called Sibling Bay. 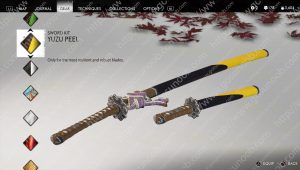 You can get seven sword kits by visiting the pillars of honor in Kamiagata. They’re scattered around the region, but the map we’ve provided below will show you where to look. When you get close enough, they’ll be marked on the map, which will allow you to use the wind of vanity to find the exact spot. 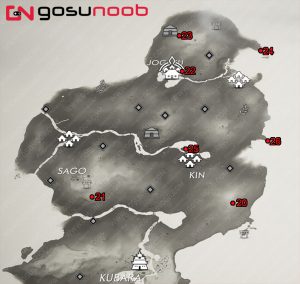 This kit has a turquoise grip with a cerulean scabbard, and a square guard. It’s a pretty unique skin, and you can get it from a pillar in southeast Kin, northeast of Kin Village. 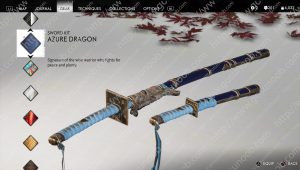 Shogun’s Storm is a sword kit with a round guard and vivid blue scabbard. You’ll find the pillar of honor with it in a frozen grove littered with red flowers, southeast of Fort Kikuchi, west of the Bitter Hills. 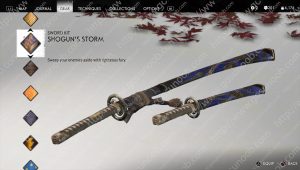 If you want an all white sword kit, this one’s the right choice. It’s wrapped in white cloth with green decorations, but apart from that and the grey ribbon on the grip, it’s all white. You’ll find it by the lake east of Jogaku Temple. 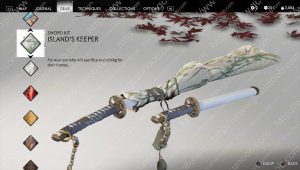 Another one of the fur-coated designs, the Tanuki’s Brush has a red fur scabbard and blue grip. You can find this sword kit by a pillar of honor on the northern slope of Mount Jogaku, north of the temple. 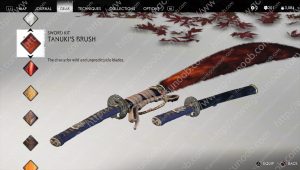 The Hidden Forest sword kit has a bright green scabbard with specks of yellow paint. You can get it by visiting a pillar on the cliffs in the northeastern corner of the map. 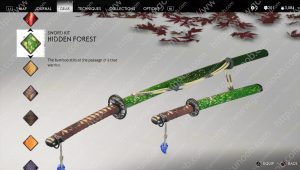 This one’s jet black with streaks of gold, and a uniquely-shaped guard. The pillar can be found on the shoal northeast of Shinboku Inn, near the middle of the map. 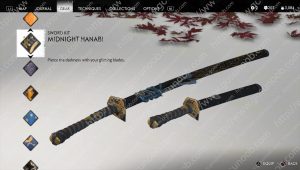 Sly Tanuki is again one of the furry sword kits, with black and white fur on the scabbard, and a blue grip with yellow ornaments. You’ll find it at the end of the peninsula east of Iwai village, north of the lighthouse. 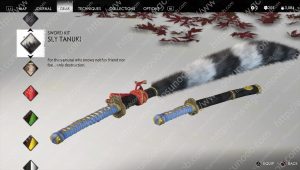