Space Monkey Mosaics are type of collectible obtainable for players who play GTA5 on PS4 and Xbox One. They are work of art of an unknown author found all over San Andreas.
▼Article Continues Below▼
There are 50 of them. You should take a picture of them with your cellphone in order to receive count. Once you find and take a picture of all 50 of them, you’ll receive new clothes customization options for Trevor and a new event for a Go Go Blista Car. This event requires you to take a picture of the author of the Monkey Mosaics, but be aware that only the returning players can finish this event. As you complete this final task you will receive a Dinka Go Go Monkey Blista Car in your protagonists garages.

As you take a picture of all 50 Space Monkey Mosaics you are automatically granted new outfit for Trevor. Too bad this is not usable in Online mode. All PS4 and Xbox one players that have collected 50 Monkey Mosaics are entitled for this prize.Note: As some of you are already aware you can always track the number of collected Monkey mosaics from general tab in Stats section of players option statistics. This statistic “only” shows total number of collected Mosaics.

Map Location of all 50 Monkey Mosaics 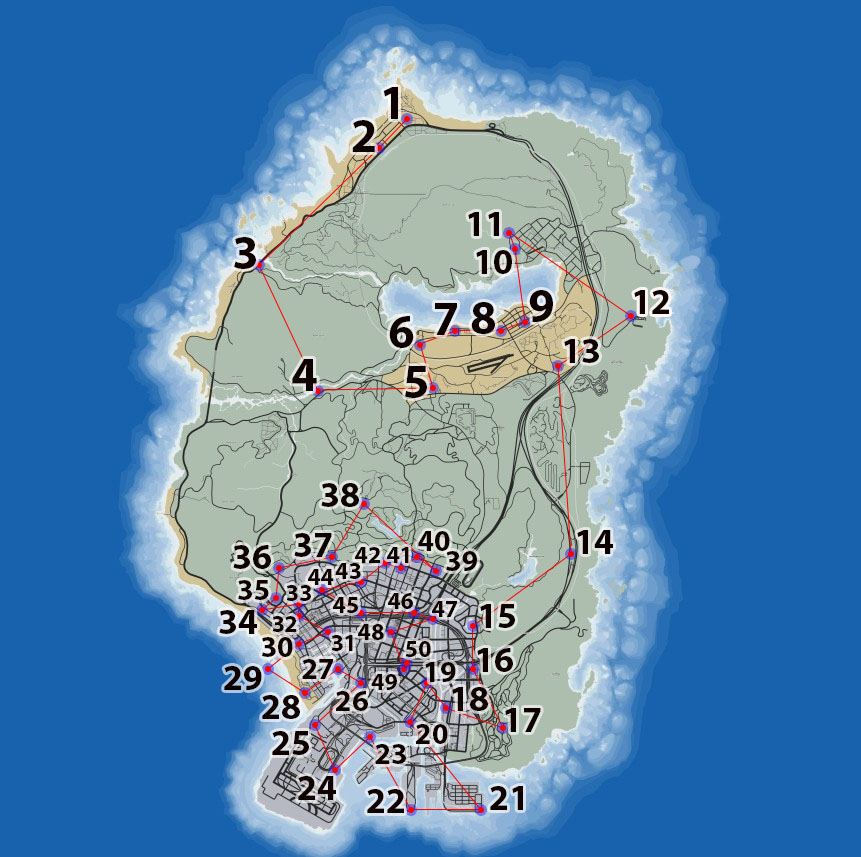 On the edge of a wall, behind the gas station.

Behind the barber shop, in a small alley, close to an electric box and a locked metal door.

At the bottom of the large southern bridge pillar.

On the edge of a wall, behind clothing and Ammu-nation stores front entrance.

Between two wooden pallets, near the recycling containers, behind the building with the clothing store.

On the lower part of the wall, next to the large metal objects.

Inside a ruined house. The Monkey Mosaic is hidden inside a small room, behind a boarded up door. It might take more than one shot with the cellphone to actually make a picture that counts.

Inside the last room on the second floor of a ruined motel. This room is located in the southwestern part of the motel.

Painted on a wooden house, below the roof edge, above a blue graffiti.

Behind a building with the brick wall, close to the wooden pallets.

On the corner of a wall, behind a metal shack where you can find several red gas tanks.

On one of the pillars that hold the roof above the entrance to the facility.

In the part of the scrapyard where there are no large airplane parts, but lots of car parts. Next to the water tower and rectangle-shaped concrete building.

Behind a large 24/7 Supermarket, hidden in the shade of a roof edge, close to the stone facade.

On the leftmost column of the small building that is surrounded by a short metal fence.

Below the freeway, on the edge of a wall on the corner of the street.

Close to the large, reddish metal container, on the back of the stairs to the elongated rectangle-shaped building.

18. Cypress Flats On the rooftop of the Pißwasser factory. There are large fire escape stairs that lead to where the Monkey Mosaic is located. Once you climb up, look toward your left to spot the right place.

Use the ladder behind the carpet center store to find and take a picture of the Monkey Mosaic. When you climb to the rooftop, jump over the wall on your left to the other roof, where the Monkey Mosaic is located.

On the edge of a fence, close to the large billboard and Mexican-American breakfast store.

At the farthest southeastern point of the map, low on the wall, close to the wooden pallets.

In the southern part of the map, close to the small, white service container.

On the lower left corner of the wall, next to a portable toilet and a metal container, near the water.

In the lower part of the wall, close to the metal fence and the large service container.

On the corner of the old, rusty container, under a crane machine claw.

At the bottom of the large Maze Bank Arena billboard, hidden behind a tall bush.

Hidden behind tall bushes, in the corner of a small garden, close to the helipad.

On the wall with the number “3” on it. This place, where the number and Monkey Mosaic are painted on, is between the sports court and the small brick bleachers.

On the side of the bench, in the lower level of the southeastern part of the pier.

On the upper corner of a wall, behind the restaurant close to the street.

On the side of the small skate ramp that looks toward the larger half-pipe.

On the a wall next to the stairs that lead to the subway.

On the wall above the Woody’s Autos sign. Rather large Monkey Mosaic, thus, hard to miss.

On the side of the long brick stairs.

At the back of the house next to the church, close to the large tree.

Close to the stairs, at the bottom of the large, brick UCLA building.

Close to the rear entrance of the Cottage Park maintenance house, high up on the wall.

In the upper level of the Galileo Observatory, on the corner of a small fence-wall.

Use the ladder at the back of the building to climb to the first floor. The Monkey Mosaic is overlooking the nearby parking lots.

In the lower part of a brick wall, on a parking lot located between buildings.

At the higher point of a wall, on the side of the “WTF?!” building. You can take a picture of this Mosaic from the street.

Above the entrance to Hardcore Comic Store.

Close to the Fruit Machine store, on the wall above one of the rooftops. You might need to climb on top of this rooftop to take a good picture of the Monkey Mosaic. The ladder that takes you there can be found behind the brick building.

Next to the fountain, on the side of the short concrete wall.

On the side of one of the white pillars in the brick wall, next to the freeway exit.

Below the freeway overpass, hidden on a wall next to the homeless “house”.

Close to the top of a train wagon located under the freeway overpass.

Next to the small window, above the potted flowers, under a street overpass.

Hidden in the shadows inside a homeless camp, in what appears to be a hole in a freeway foundation.

At the end of a long, dark passage.