A new season has just started in Forza Horizon 5. And, as every FH5 player knows, this means the inclusion of many new challenges that you can undertake for the next seven days. One of these is the Safari Concept. This Winter Season Challenge requires that you, to quote the game directly: “Own and drive the 2016 Jeep Trailcat, built as a tribute to the 50th Anniversary of the Moab Jeep Safari”. Players are full of questions regarding this car model. Where can you get it? How much does it cost? Can you get it for free? To help you complete this challenge as quickly as possible, our 2016 Jeep Trailcat Forza Horizon 5, Safari Concept Winter Season Challenge guide will answer all of these, and more. 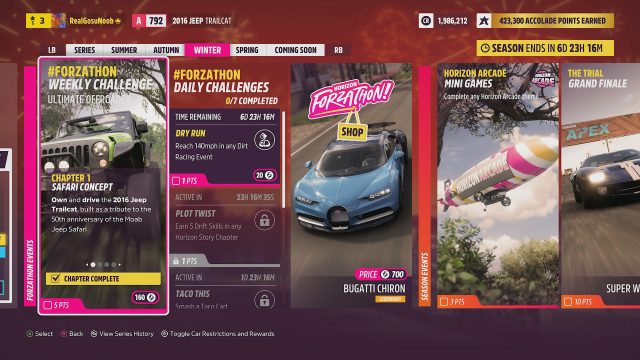 Thankfully, there are several ways to complete this specific challenge. The simplest way to do it is to just buy the car. To do this, head on over to the Autoshow and purchase it. The 2016 Jeep Trailcat costs 75,000 CR, so it isn’t as wildly expensive as some of the other cars you needed for some other challenges, like the Ferrari F40.

If you would rather not spend your hard-earned CR, you can also get the 2016 Jeep Trailcat through the Born to Win Accolade. To earn this Accolade, you need to win the Cross-Country Races in the game. Of course, this can be pretty difficult to do, since these races are very hard. There are many hard turns, so if you make a mistake – don’t forget to make use of the rewind function. In any case, once you get the 2016 Jeep Trailcat in Forza Horizon 5, either by buying it or by earning the Born to Win Accolade, all that’s left to complete this Safari Concept challenge is to take it out for a drive.