What does the Golden Ticket do in Apex Legends? Apex Legends Season 15 is approaching fast and developer Respawn is slowly starting to tease players with glimpses of what’s to come. The newest teaser is interactive by its nature, and it’s called the Golden Ticket. You can get it inside the game itself, but how to use this ticket? In our guide, we explain how to get and use the Golden Ticket in Apex. 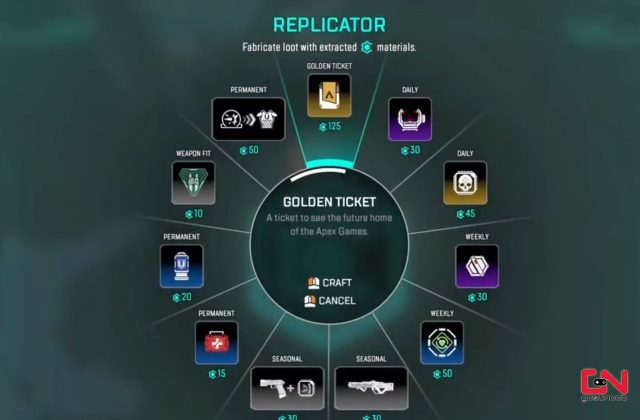 How to Use the Golden Ticket in Apex?

How to Get Golden Ticket in Apex Legends?

The Golden Ticket is Respawn’s second teaser for the upcoming Season 15. And this time around, the teaser can be found within the game itself. It is a craftable item in Apex, which you can obtain via Replicators. Here’s what you need to do to get it:

What is Golden Ticket in Apex Legends?

Now that we know how to get one, let’s see what the Golden Ticket does in Apex Legends. Unfortunately, it does nothing in terms of gameplay. However, that doesn’t mean that you’ve wasted 125 materials in vain. In fact, you’ll receive a fully-kitted weapon for your materials. That’s on top of getting the ticket as well.

So, if it does nothing in the game, what’s its purpose then? For now, Respawn hasn’t revealed anything officially. However, several leaks point towards an event this week (October 17-21), which will reveal more information about Season 15 to everyone who owns a ticket. Previous teaser, as well as several leaks, all indicate that Season 15 will introduce a map set on Boreas, Seer’s home planet. So, there you have it, keep your Apex Legends Golden Ticket and soon you’ll learn more about the upcoming season.

NEXT POSTHow to Get Wisps Creatures of Sonaria Halloween Event 2022