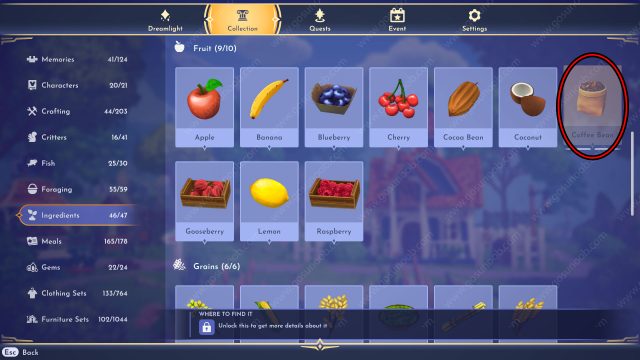 How to Get Coffee Beans in Disney Dreamlight Valley

Update: We have finally unlocked Coffee Beans! We have to admit that we time traveled, and manually set the date on December 17th. Once we unlocked Stitch and upgraded his Friendship level to 4, a new quest was available for us. During the quest Stitch will tel you that he’s so sleepy and wants coffee! You’ll plant a coffee tree and get your first Coffee Beans in Disney Dreamlight Walley!

OLD TEXT: At the time of writing this article, we still don’t know how you will be able to get the Coffee Beans in the game. This is because the Coffee Bean ingredient hasn’t yet been unlocked in Disney Dreamlight Valley. And while you aren’t able to get it yet, there are a couple of hints that point toward how it’s going to appear in the game. Needless to say, this is all just speculation at this point.

This ingredient could be introduced into the game with Stitch. After all, Maui brought coconuts into the game, so this could also be the case with Stitch. It’s not that big of a stretch, since Lilo gave Stitch some coffee in a baby bottle in the original movie.

Finally, there is an image from the official Disney Dreamlight Valley Discord floating around that claims to have unlocked Coffee Beans, and that you need Shrimp and Lettuce for it. So take that with a big grain of salt, as it can easily be fake. You can see this image down below. In any case, there’s no doubt that Coffee Beans are going to arrive to the game soon. And when they do, we’re going to update this guide with confirmed information about how and where to find Coffee Beans.