ZB-013 Extract Location in Escape from Tarkov is in the new Customs map, in the construction area added in the 132.7 update. In order to use the new Custom Map Tarkov ZB-013 Extract Point, aside from knowing where to find it, you also have to figure out the location of the switch to turn the power on. So, in our Escape From Tarkov ZB-013 Extract Location – Turn the Power On – 12.7 Customs Map Expansion guide, we’re going to show you both where to find the exit, where is the power switch, etc.

To find the new Customs Map ZB-013 Extract Point in Escape from Tarkov, you have to go into the basement of the run-down warehouse building behind the two chimneys in the construction area, where the SCAV sniper is at. This building is extra dilapidated, since it has almost no roof and is missing most of its walls. The entrance into the basement area is in the hole surrounded by digging equipment, with several large pipes scattered about.

Once in the basement, head left through the door, then left again. You’ll have to have a Factory Key on you in order to get all the way to the ZB-013 extract point. More importantly than that, you’ll have to find a switch to turn on the power in order to use this exit. That brings us to our next point.

How to Turn the Power on for ZB-013 Extract on New Custom Map Tarkov in 12.7 – Where is the Power Switch

The power switch to turn on the power for the ZB-013 extract in Customs in Escape from Tarkov is located inside the newly-accessible building in between the old gas station and the shortcut to said gas station, which you have to open with the factory key. With your back to the gas station, head left and down under the overpass. Go around the overturned train car and head straight for the small door of the warehouse-like building. The door has “НЕ СТРАШНО?” graffitied next to it.

Once inside the building, you’ll have to find a room in the northeast corner on the ground floor. So, walk to the large double-doors on the far end. The one with two TERRAGROUP signs in front of it. Head through these doors, then, keeping to the right, head to the far corner. There’s a door under the stairs. Go in there and hang a right. There’s the switch, next to the “ЖОПА НАХЕР” graffiti.

Exit the room the same way you came in, but open the door immediately to the right. This will lead you outside, so turn right and follow the path directly back to the gas station. Exit the area through the gate you’ve entered through, crawl under the train, and you’re in view of the building within which the ZB-013 extract lies.

Here’s a nice, short, TL;DR, version of what you need to do to extract at ZB-013 on Customs in Escape From Tarkov. (just in case our video guide was not good enough). 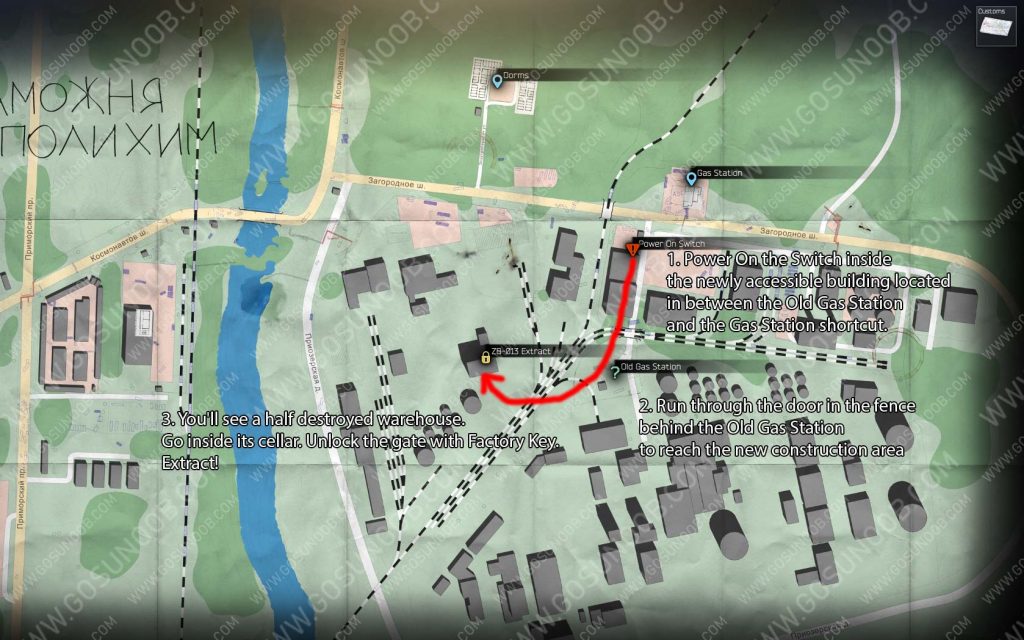