Among the first side quests in Greedfall is The Charlatan. It is given by The Bridge Alliance ambassador Sahin. Quest shows right away just what kind of RPG Greedfall is going to be. Lots of choices with different outcomes and ways to solve quests. I’ve played through different ways to solve the quest and wanted to share my findiungs with you. I hope this will help some of you decide the outcome of the quest you are most comfortable with. We’ll discuss where to find the charlatan, what each choice in the quest has as a consequence and more. 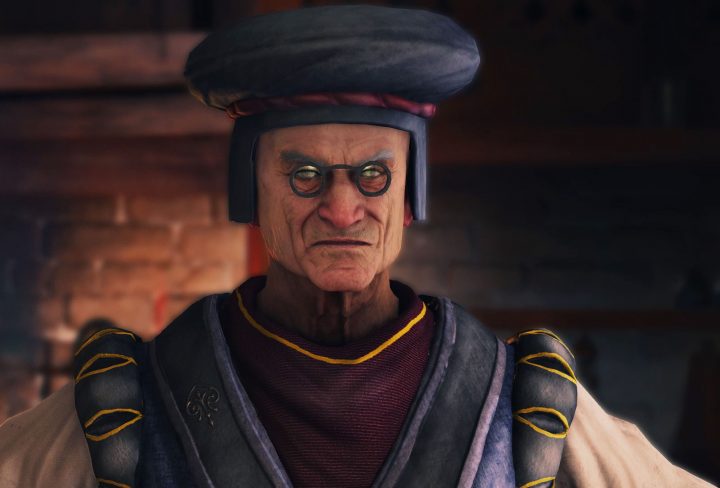 Where is the Charlatan in Greedfall?

The Charlatan is in the middle of Serene. You will recognize him by his constant shouts to the gathered crowds. If you approach his stall you will start a cutscene. From the Bridge Alliance Embassy move east until you can turn south. You should approach a small river and cross the bridge. Turn right around the corner and the charlatan alchemist should be there. If you found the merchant you should move east of it for just a few meters and you should hear the charlatan yell. After you talk to him and exhaust all conversation options you will get the task to unmask the charlatan 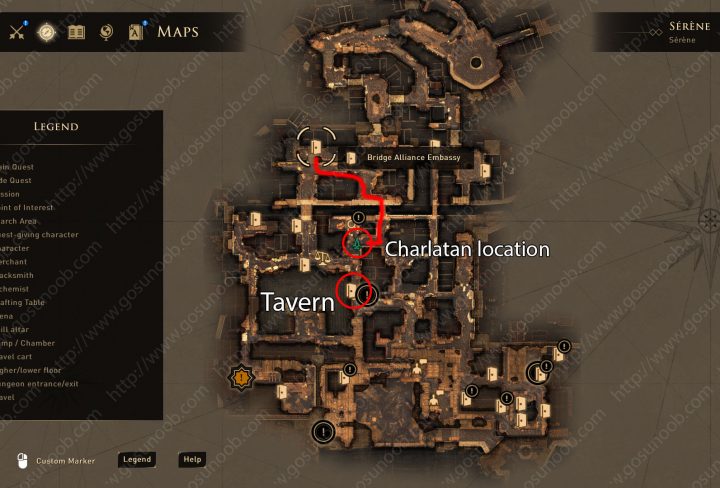 You need to find his potion cart, which is behind his stall and a fence separating them. Go north, around the building, and you should see an iron door right next to the river bridge. Open it and face some enemies. You should now be able to loot the charlatan potion along with a note called Alchemical Research Book. This is not essential but gives some background information to help you decide how to handle the quest.

After you insist on the alchemist drinking his own potion he escapes. IF you need to find the Charlatan for the second time he is hiding in the local tavern. Entrance into the tavern is directly south of where his stall is. Once you enter go left and through the door. Climb the stairs to the right and you will find the charlatan through the first doors to the right.

Help or arrest the Charlatan?

Once you talk to him and go through all the conversation options you will be faced with a choice. Help him leave the city or arrest him. The story he tells makes his actions a bit more understandable. Ambassador Sahim is out to get him. His potion does not hurt people and it can actually help with research for the illness plaguing the world of Greedfall. These might all be just lies told by a charlatan though, but if you look in the other room in the tavern you will find a Letter from an alchemist from Al Saad that corroborates his story. Along with the alchemist research note you found earlier it seems this man is telling the truth. At the same time he is doing large scale experimentation on the populace without telling them.

However you look at the situation the choice is, in the end, entirely yours. Here are the consequences of each choice. If you arrest him you will get 50 gold and +3 reputation with the Bridge Alliance faction. You can help him leave the city in a couple of ways. Find the innkeeper’s key and then take him through the tavern service door. You can also try negotiating with the angry crowd to let him go. If you succeed in either, he will escape and give you 80 gold. When you get back to report to Sahid you will have a choice. If you tell the truth you will lose 1 Bridge reputation and get 50 gold. If you stay diplomatic and not call out Sahid you will get +1 Bridge Alliance reputation and additional 50 gold.

How to deal with the angry mob?

Ways of dealing with the situation will largely depend on which starting skill you chose when you created your character. If you “Propose a Settlement” you will need to give 6 health potions. These can be crafted if you have Science Level 1 and you have Hawthorne and Beast Essence. Potions can also be purchased from a nearby merchant for 23 gold each. You can also find them in various containers and loot them from enemies. In general, a rather expensive endeavor. 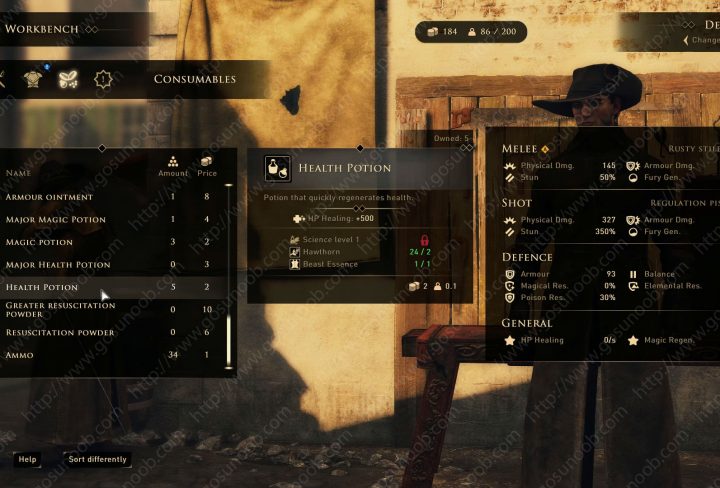 If you picked Intuition as your first talent in the game then you will be able to influence the angry mob and make them leave for free. For those of us that did not pick intuition we have to order them to disperse and this leads to a fight. You will have to fight at least 5 of your citizens and you will lose 1 reputation with the Congregation of the Merchant! I would advise against this and rather try and get the charlatan through the back door of the tavern. 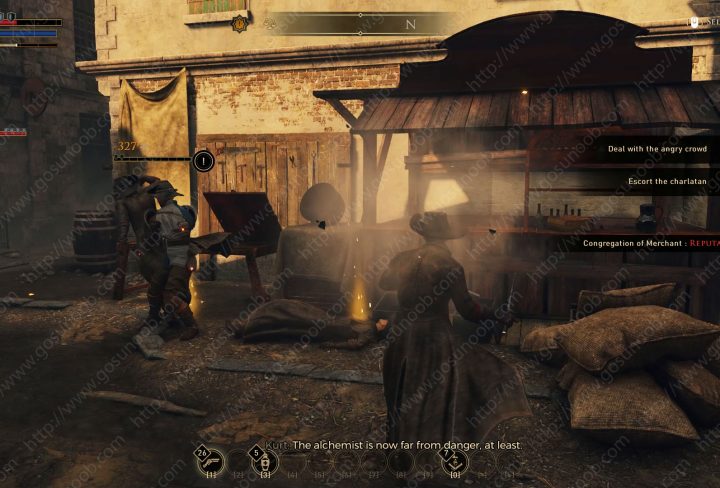 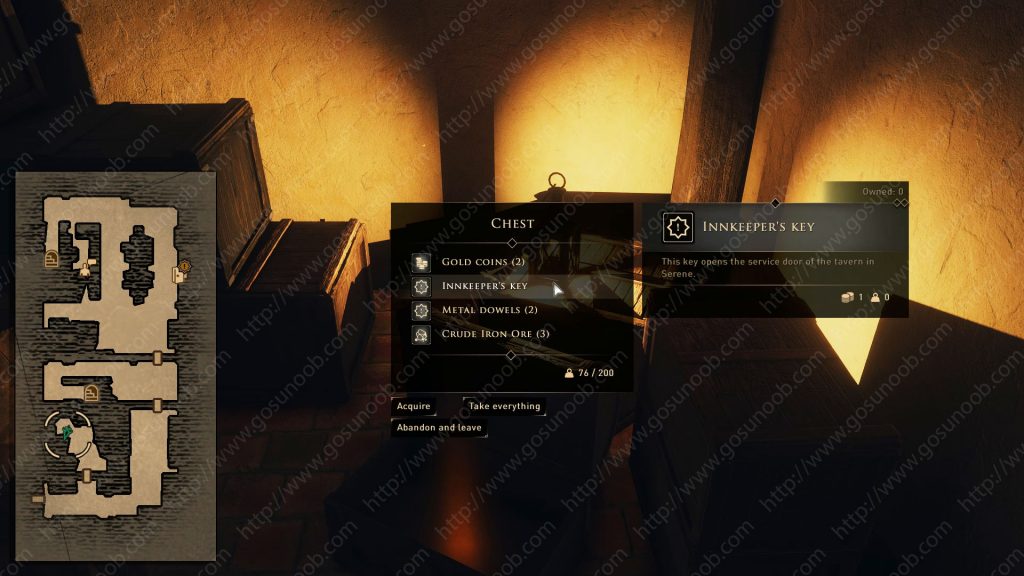 To open the Tavern service door without lockpicking you first have to find Inkeeper’s storeroom key. Exit the charlatan’s room and go SW into the adjacent passageway. (Go left of the stairs leading downstairs.) On the table there you should see the key. Now go downstairs and enter the door to the right. With the storeroom key open the locked door (game says to press Q to use the key). Pick up the Innkeeper’s key and open the door in the back. 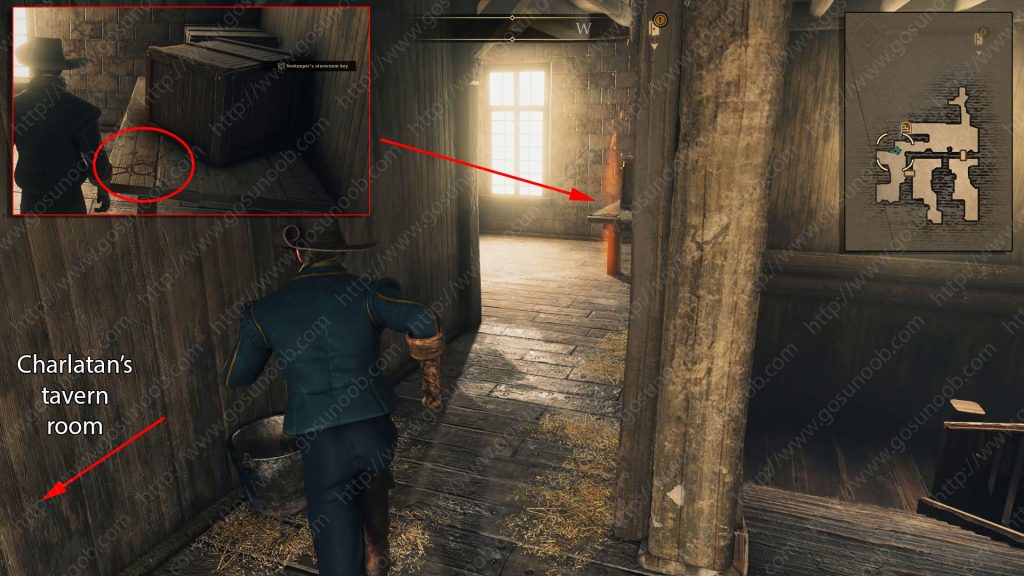 All that is left to be done is escort the alchemist through the streets of the town back to his cart. You will fight several groups of mobs. Try avoiding running into the angry mob in front of the tavern. Now that you are done with this quest then you might want to check out our Naut disguise location quest guide.

PREVIOUS POSTGreedfall Naut Disguise in Serene – Where to Find

NEXT POSTGreedFall Merchant Prince Armor Set Location – Where to Find