Are you receiving the “All Tables Full! There should be an empty seat in about X minutes” error message in Hearthstone? It has been eight years since the release of Blizzard’s megapopular Warcraft card game, and Hearthstone is still going strong. However, from time to time, some issues that have been plaguing the game since the beginning reappear. One of the most common is the “Hearthstone All Tables Ful” error. Here’s what it means and if there’s a way to fix it. 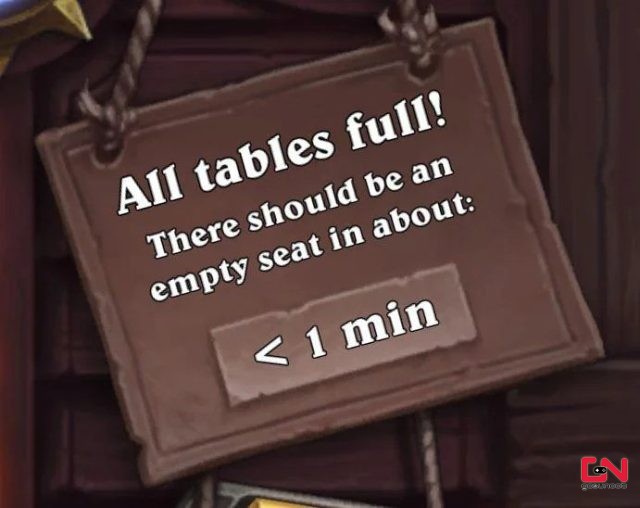 All Tables Full! There Should Be an Empty Seat in About X Minutes Hearthstone

There’s not much to explain here, to be perfectly frank. When you receive the “All Tables Full” message in Hearthstone, it’s a thematic way of saying the game’s servers are currently overloaded and that they can not accept more players at the moment. Thus, that’s not something which you can really fix on your side because the issue has nothing to do with you. Rather, Hearthstone servers are overcrowded and are collapsing under pressure.

This usually happens on several occasions. The most common situation is when the new expansion releases, and everyone rushes in to open packs and try the new cards. Thus, when the March of the Lich King expansion releases, servers will probably be overloaded, and you will receive this message. The expansion drops at 7 pm CET / 6 pm GMT / 1 pm ET / 10 am PT. And, if you want to avoid being stuck in the queue, we suggest waiting an hour or two. The pressure on the servers will probably weaken after a couple of hours. And the “All Tables Full! There should be an empty seat in about X minutes” error message should stop appearing.

The other situation where you might get this message is when there’s a server outage. In this case, it is not related to Hearthstone specifically. Instead, it is usually a widespread issue across Battle.net for all Blizzard games. This usually happens when Battle.net is experiencing a DDoS attack. With that said, that’s all you need to know about this error message in Hearthstone.