Bird of Prey is one of the story missions in Hitman 3. It takes place in Dubai, and if you decide to pursue it, you’ll get to pose as a hired assassin – no, another hired assassin – in order to get close to Carl Ingram. One of the steps requires you to bring his assistant a photo of a target you dispatched, but a lot of folks are having trouble with it. There’s a bug that’s preventing them from handing over the photo, so the quest doesn’t progress beyond that point. If you’re stuck here, our Hitman 3 Bird of Prey bug solution guide will show you what to do.

How to solve Bird of Prey bug?

After you’ve dealt with the journalist, you’ll have to take a picture of his body and bring it back to the assistant/receptionist. After you hand it to her, she’s supposed to take you to Ingram again. However, a lot of folks are encountering a bug here.

Many players have reported giving her the photo, after what she just keeps standing behind the desk. Even after announcing she’s going to take you to the penthouse, she doesn’t move from her spot. Thankfully, the solution is rather simple.

Your objective isn’t to follow her, but to get to the meeting. Simply go up to the penthouse on your own and talk to the man – this will progress the quest as if the assistant lead you there herself. 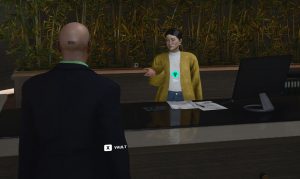 There’s also another, rarer bug, in which you can’t even hand the photo to her. This one’s a bit more serious, as it does break progression through this quest. The only solution we’ve heard of is to restart the mission – it’s far from ideal, but at least it’s something. You can either restart right away, or complete the mission another way, if you’ve already made progress on another front.

NEXT POSTChip and Dip Hitman 3