Looking for the best budget decks for the Klyntar Featured Location in Marvel Snipe? You’ve come to the right place! The next featured location has been revealed for Marvel Snipe. From December 14th to December 16th, the Marvel Snap Klyntar location will have a 40% increased chance of appearing in your matches. This guide provides the best cards, strategies, budget decks, and meta decks for the Klyntar Featured location. 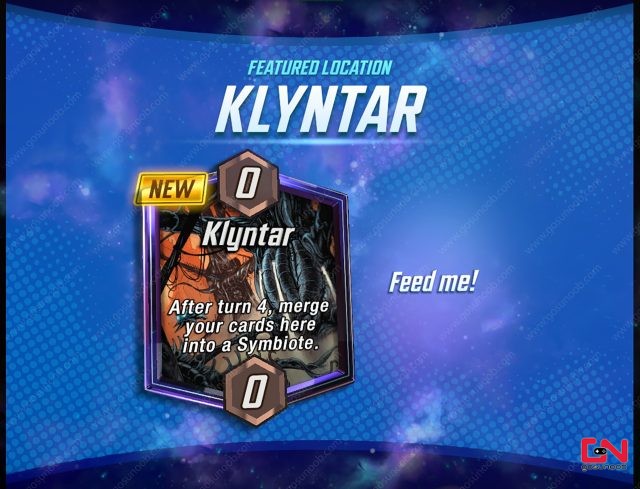 The Klyntar effect says, “After Turn 4, merge your cards here into a Symbiote.” It is important to note that this merge doesn’t mean that the merged cards have been destroyed. Thus, it has no synergy with cards that work with the “destroy” keyword, like Knull or Death. It will also not activate any “when destroyed” effects. Since Symbiote will probably be rather big, putting Shang-Chi into your deck is a reasonable option as a potential counter for huge Symbiotes. Also, given that the Symbiote spawn as a 1-Cost card, Killmonger is another potential counter.

The difficulty with this featured location is that it is easy to counter but hard to protect. Furthermore, if you spend too much effort trying to make this location powerful, you might suffer from a lack of power in other locations. You only really have two options here. Either go for a hard counter of the location, which requires you to have Killmonger (preferably) or Shang-Chi in your deck. Or, you can counter it by destroying the location with Scarlet Witch or Storm. If you have a deck which you play regularly, with these cards in it, play the game your usual way and wait for the opponent to make a fatal mistake with Klyntar overpower.

Pool 2 opens up access to Killmonger and Storm. And, if you have these cards, you can control Klyntar quite well. You can use your regular deck with the inclusion of these three cards. Your power combo is Storm, followed by Jessica Jones on the Klyntar location on turns 3 and 4. Killmonger is there to equalize the playing field if you don’t have that combo. You can use the meta control deck for pool 2 for this, which we showed above. Hobgoblin is a sound card for this control deck as well, particularly instead of Enchantress or Professor X. You can also try the Devilsour control deck. Still, it is somewhat awkward. Because when things happen the most, on turns 4 and 5 for your Devilsour combos, you have to counter Klyntar.

There are quite a few good combos for Klyntar for those with access to most Marvel Snap cards. Typhoid Mary looks like an excellent turn 4 play, because its negative effects will vanish with the Symbiote. You can focus on other locations until turn 4 and protect the Symbiote with Armor, if possible, on turn 5. Another good combo is Wave + Red Skull on turns 3 and 4 for even more power on Klyntar. Another essential card to consider is the Taskmaster.

Since Klyntar merges cards into the Symbiote, Taskmaster should copy its power on turn 5. You can always play control and counter with Killmonger, Shang-Chi, Electra or Storm, and Professor X. This week’s featured location is not a big obstacle for current meta players, so we leave the deck up to you. In case you need ideas, in the spirit of Silver Surfer season, here’s one of the decks you can play, as seen in this YouTube video:

NEXT POSTHow to Show FPS Witcher 3 Next Gen Update