The Voyage to the Sunken City expansion is now live! The first Hearthstone expansion of the year has arrived and players are already exploring the possibilities with new cards. As is usual at the start of a new Standard year, a lot has changed. The new expansion is only one piece of the puzzle. Ashes of Outland, the Scholomance Academy, and the Madness at the Darkmoon Faire sets have rotated out into Wild, and there’s a brand new Core Set. In the early meta, it seems that the Mech Mage deck is a pretender for the top meta deck. Read on to find the decklist. 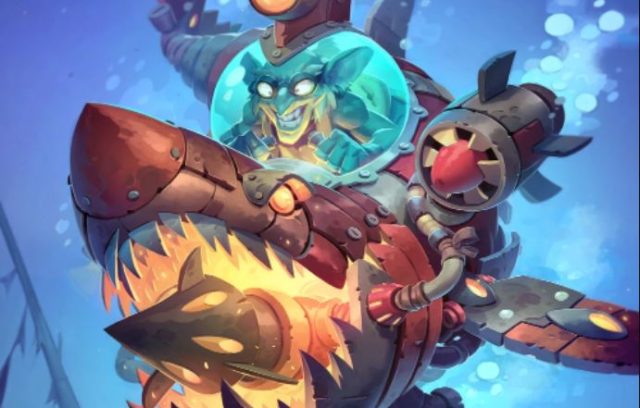 Somewhat surprisingly for an expansion set in the deep sea, Mechs are one of the returning themes in Voyage to the Sunken City. In particular, Mech Mage has received a lot of Mech support. Four out of seven new Mage minions are Mech. And on top of that, they synergize nicely between themselves. Finally, Seafloor Gateway, one of the new spells, opens up possibilities for some disgustingly strong plays. Gaia, the Techtonic and Mecha-Shark are the core cards that can enable some rather powerful combo turns.

This new variation of Mech Mage essentially plays as a tempo/midrange deck that aims to control the board with its minions and look for valuable trades. In the meantime, you should prepare your powerful combo turns with Seafloor Gateway and Mecha-Shark. Cards like Click-Clocker, Security Automaton, and Seascout Operator will allow you to secure early board control, while Kazakus will make a smooth transition to mid-game.

Amalgam of the Deep, Gorillabot A-3, and, Mothership provide both nice bodies and value to keep the deck rolling. Designed by Thijs, the deck is both fun and strong. Thus, we strongly recommend it for the first few days of the Voyage to the Sunken City meta. Here is a full Mech Mage Sunken City decklist: