Mementos are collectibles in Call of Duty WW2. There are 33 mementos scattered throughout 11 missions and none of them are missable. You’ll find 3 mementos per each mission. Once you collect memento it will be automatically saved, thus, you don’t have to pick it up again if you die. Call of Duty WW2 Memento Locations guide will show you collectibles in order of story progression and help you unlock Pieces of History Trophy / Achievement.

IF YOU HAVE PROBLEMS:
Call of Duty WW2 Errors – Stuck at Loading Screen, Performance Issues

#1 Nazi Knife
In the first mission D-Day during objective Ascend the Bluffs, follow the trench to the very end, then turn right into a turret bunker. You’ll find a knife stacked into a wooden log.#2 Compass
The second memento – Compass can be found during objective Clear the Bunkers. Before you enter the fourth bunker, turn left and follow the path. You’ll come across a storage room, but this time the metal door will be open. Compass is waiting for you on the Ammo box.#3 Pathfinder Patch
The third collectible you can find during the objective – Rally with your Platoon. Once you destroy the Artillery with TNT in a small helmet, head into the stable behind the . Next to the second door, on a small wooden table, pick up Pathfinder Patch, the last collectible in the Mission 1.

#4 Lighter At the start of the mission, during objective Get on the Tank, turn to the right and you’ll see two soldiers standing next to barrels, near the transport truck. Find the collectible on the barrels.#5 Pocket Watch In the area with farms, check the far left side. In a wooden shack, during objective Reach the AA Gun, you’ll find shining memento in the form of a Pocket Watch, on a small table. Pick it up before searching for the gun.#6 Gas Mask In the Push forward with your Armor objective get behind one of the tanks and follow them until you reach a huge bunker. Inside the bunker you’ll find the gas mask on a Nazi corp.

#7 Locket
Objective: Take the Church
Inside the first building from where you start the mission (one with number 32 on it) is the Locket Memento. Go up to the first floor of the destroyed house and you should see it hanging next to a painting with a golden frame. It is directly opposite of the entrance into the building. 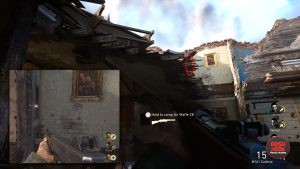 #8 SS Pin
Objective: Clear the Church
SS Pin is well hidden inside the church. As you go inside you will have to clear some enemies and the flamethrower guy. Before you leave the church look for a hole in the ground near the right wall. There is a little alcove there with SS pin just slightly shining in the dark. 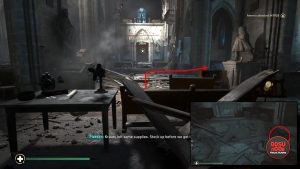 #9 Fuel Canister
Objective: Defend the area
After protecting your squad from the bell tower you’ll exit the church. As you exit you’ll see a flag straight ahead of you. Go towards it just a few steps and you should be able to see a fuel canister next to the first barricade (where enemies spawn). If you picked up the flamethrower, this goes quite well with it. 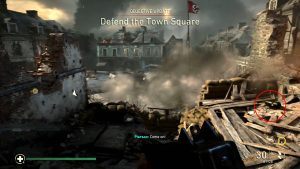 #10 White Rose Poster
At the start of the mission, go through the first house. In the backyard, turn left and you’ll find the poster hidden in a bucket near several guards. You’ll have to kill all guards.#11 Dog Collar
In the Stop the train objective, when you enter the house, just go straight ahead into the second room, then turn left. You’ll find a dog collar on top of the piano.#12 Rocket Blueprint
At the end of the chapter, objective Rally with your Squad, after the train crashes, you’ll come to the area where a dog will attack you. Before going up the hill and jump over the log, look for memento collectible on the box.

#13 Propaganda Poster
Objective: Search for Officer Fisher
You are undercover in Paris. As soon as you enter the building you need to find the Toilettes if you want to get the collectible. Walk straight from where you entered and you should see the Toilletes door in the right corner (right of where you enter to go to the basement and where the iron cage elevator is at) Alternativelly you can go straight from where you entered and turn right past the iron cage elevator and the door should be just around the corner. Propaganda Poster is in one of the stalls, on the floor. 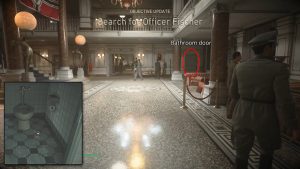 #14 Liquor bottle
Objective: Place explosives on the north gate
After your meeting with Heinrich and getting the explosives you’ll be in the courtyard. There’s a door, behind the truck where you are supposed to place the explosives at (at the north gate), that you can lock pick. It is opposite where you have the optional objective to rescue Fischer. After you pick the lock use the stairs on your immediate right to get up to the first floor. In the room there, on the briefcase, is the Liquor bottle. 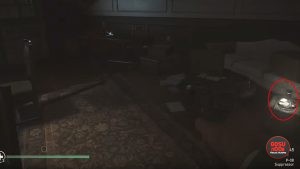 #15 German Medal
Objective: Assault the garrison
Now that the stealth part is over it is time for you to fight your way through the streets of Paris. As you make your way you’ll have the Notre-dame church on your right at one point. German Medal is on one of the crates next to the German troop transport, directly in line with Notre-dame. 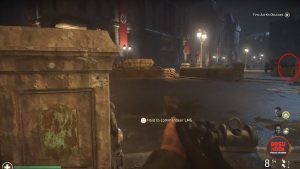 #16 Music Sheet
After the Sherman tank driving section, you’ll get objective Reach the Hotel. Follow a narrow street, then turn left . You’ll see a huge white HALT poster, and a piano next to it. Grab a piece of paper on top of the piano.#17 Cigarette Box
Objective: Reach the Hotel
In the second apartment, after the cutscene in the living room, where you can help a soldier, you will see two huge holes in the wall. Go through the hole to the right (several enemies will be waiting for you), then upstairs. Turn around, go to the last room, on the fireplace memento is waiting for you.#18 – Hotel Pen
Once you help a soldier to move a truck, you’ll get objective Secure the hotel. When you clear the path – blow up the hotel’s wall, and enter the lobby, turn right. Hotel pen is hidden below the front desk.

#19 German Flare Gun
Objective: Eliminate the Mortar Team
After you defended the bridge your squad splits and you go down the river to eliminate the mortar team. There are three trucks there, one with the camo tarp next to it. German Flare Gun is on the crates under the tarp. 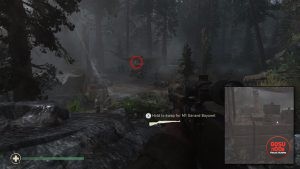 #20 Food Container
Objective: Find your Squad
During your escape you get split up and need to find your squad. You’ll immediately come across a dead airplane pilot hanging from its parachute. Past him you’ll get attacked by a dog. There’s a crashed airplane body there. Inside is the Food Container. 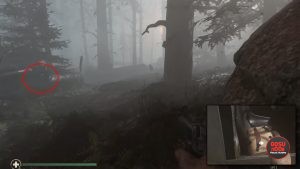 #21 US Army Rations
Objective: Eliminate the Sniper
Enter the bunker where the sniper is at. Open the door that reveals a staircase leading you up to the sniper nest. Collectible is hidden on top of a chair placed on a girder above that staircase. 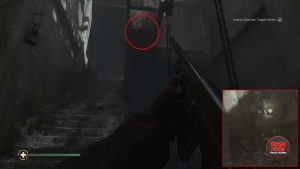 #22 Journal
Objective: Capture the Hill
As you’re climbing up the hill towards the bunker, look for a dead soldier propped up against a tree stump. The journal is on the ground next to him. 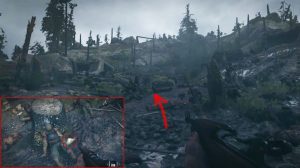 #23 Pipe
Objective: Destroy the Artillery
When you’re in the trenches, getting ready to use the thermite to destroy the artillery gun, turn left and look to where Pierson is kneeling. There’s an ammo cache behind him, and the collectible is on top of the ammo boxes. 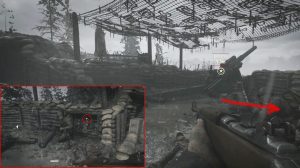 #24 Billfold
Objective: Destroy the Artillery
As you exit the bunker and start your assault on the last artillery gun, go left. You’ll find a bunker next to the burning tree in the woods. The billfold is on the bunker’s window.

#25 Camera
Objective: Deliver the Ammo Box
This one is within arm’s reach from the spawn point. It’s on the low rock next to the three soldiers in conversation. 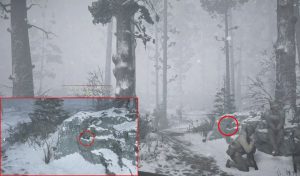 #26 Comic Book
Objective: Deliver the Ammo Box
This collectible is in the foxhole where you’re supposed to deliver the ammo. It’s next to where Private Cunkle is sitting when you arrive, by the tree. You can pick it up as soon as you put down the box. 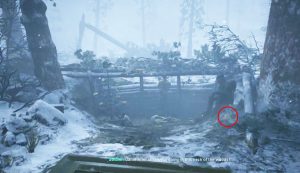 #27 Wings
Objective: Regroup on Pierson
You can actually get this one from the start, but it’s easiest to get it at this point, since it’s right next to Pierson and the rest of your squad. When you near them, turn right and go around the patch of trees. You’ll see a foxhole with a cardboard box in front of it. The memento will be in the box. 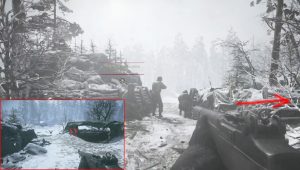 #28 Magazine
Objective: Reach the overwatch position
As you enter the German base, you’ll notice two hangars – one with a plane inside, one without. Enter the one without the parked airplane, and you’ll find the collectible on a crate near the back of the truck. 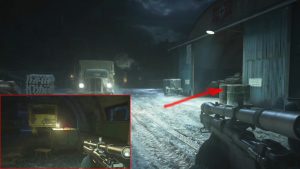 #29 Flask
Objective: Provide overwatch for Pierson
The flask is located in the red barracks. You’ll find it on a dresser next to the white side-door. 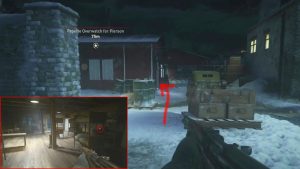 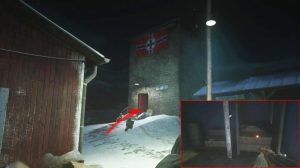 #31 Canteen
Objective: Secure the Tower
The canteen is on the second floor of the tower, next to a dead body in the middle of the room. 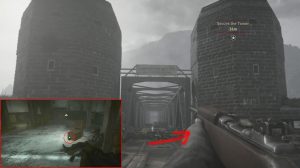 #32 Stein
Objective: Rally with Pierson
Go into the room where Pierson is waiting, but instead of approaching him, you should head up the stairs. The stein is on a table on the upper floor. 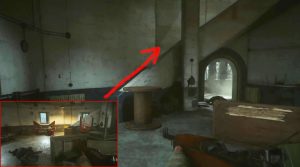 #33 Letter
Objective: Rally with Pierson
Once you’ve got the previous one, keep climbing to the top floor. You’ll find the letter on the crate next to the machine gun nest. 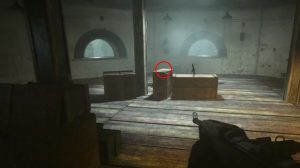