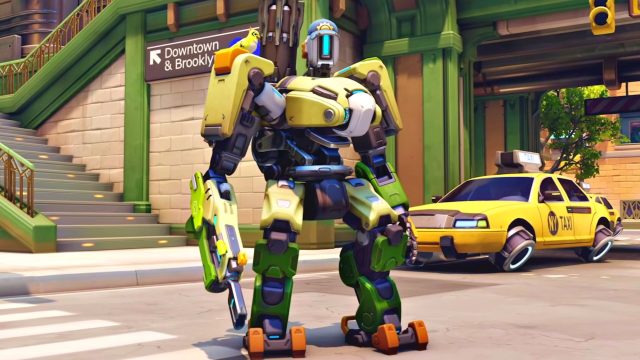 When will Bastion return to Overwatch 2?

When Will Bastion Come Back to Overwatch 2?

UPDATE: Our predictions were wrong, and Bastion wasn’t back by the end of the week, despite Blizzard stating he is on “a quick trip”. Current predictions in the community are much more pessimistic compared to our estimation. Some fans speculate that Bastion will return in November, as a part of the mid-season update. Blizzard confirmed that this update will feature balance changes to D.Va, Genji, Zarya, and Sombra. There are rumours that even then Bastion will not return. Rather, some think that Blizzard will only bring him back at the start of Season 2, on December 8th. As always, we will endeavour to update the article as soon as there’s new information.

Why was Bastion Removed from Overwatch 2 Explained

ORIGINAL STORY: SST Laboratories Siege Automaton E54, or as we all simply know him – Bastion – has been temporarily disabled in Overwatch 2. According to Blizzard, Bastion and Torbjorn are “taking a quick trip to the workshop while we iron out a few bugs in their ability kits”. While Blizzard is being rather vague here, when some heroes are being pulled out from the game entirely, it usually indicates some game-breaking bugs and easy-to-do exploits. And that’s indeed the case with Bastion. So, why is Bastion removed from OW2?

Bastion has been reworked for OW2, with quite a few changes to his kit. The bug in question is related to his Configuration: Artillery ultimate. Normally, it should fire “3 powerful artillery shells”. However, due to this crazy exploit, he was able to unlimitedly unleash a barrage of bombs, spreading terror among enemies from above. This is, of course, complete unbalanced and frustrating to play against. Thus, Blizzard disabled the hero from the game completely until they fix this glitch.

At the time of writing, Blizard hasn’t provided an estimated time of arrival. They only stated that it will be “a quick trip”. Thus, it seems like we will not wait long for his return. Our estimation is that Bastion will return to Overwatch 2 by the end of this week. We will make sure to promptly update the article in regards to any news about Bastion’s comeback to OW2. With that said, that’s all you need to know about why is Bastion removed from Overwatch 2.