Rainbow Six Extraction is going to release very soon. While it is still a tactical shooter at heart, it also features a thrilling science fiction (and horror) plot. As such, it is a notable departure from the more grounded and realistic previous entries in this beloved franchise. And, like many other AAA games, it also has several different editions that you can purchase. These are the Standard and Deluxe Edition. Of course, these are packed with all sorts of pre-order bonuses and other goodies. And, in this R6 Extraction How to Redeem Pre Orders & Deluxe Packs: Obscura, Noxious Touch, React Strike guide, we will go over all the things you need to know about these. 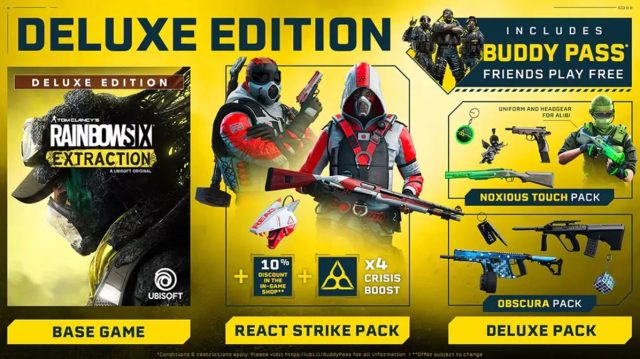 This pre-order bonus is applicable to both the Standard and Deluxe Editions of the game. To get this, you will have needed to pre-order the game, which you can still do before it gets released on January 20th, 2022. In any case, by pre-ordering the game, you will get the so-called Orbital Decay Bundle. This bundle consists of the following items: Orion Uniform (only Finka and Lion can use it), the Vaporized weapon skin (a universal weapon skin), and the Crashlander charm.

As for the Obscura Pack, it provides the following: universal Cephal Black and Cerulean weapon skins, as well as the Redacted and Anagram charms.

Finally, the React Strike Pack. It includes the universal Spectrum uniform, headgear, and weapon skin, Lockjaw charm, 6 XP Boosters (which can be used in post-launch events), and a 10% discount for the in-game shop.