In a world of tactical acronyms, REACT (Rainbow Exogenous Analysis and Containment Team) is really pushing it. That “E “feels forced, really. Why use “exogenous “when there is a perfect “extraterrestrial “alternative? Rainbow Six Extraction deals with aliens, after all. Yes, you could say they are exogenous, but (please stop now. Ed.).

Rainbow Six Extraction is an online co-op tactical shooter that looks like a blend of The Bureau: XCOM Declassified and Rainbow Six Siege. Instead of killing tangos, world-famous anti-terror operators will engage the manifestations of The Chimera Parasite, an alien entity that bears some resemblance to Protomolecule from The Expanse. Chimera creates the dark goo that envelops everything; from that quagmire, emerge nests, carapace towers, and various foot soldiers. Biological nightmare is taking over the world, and REACT, new age XCOM alternative, must use the brains and brawn to give all of us a chance.

Glory to the Many 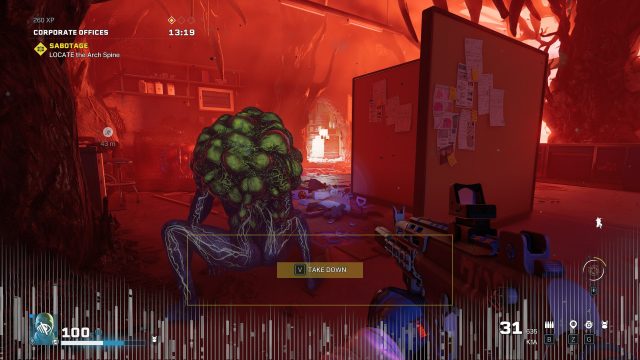 What good are bullets against replicating hostile alien biomass, you may wonder? It turns out they work just fine. Chimera soldiers, Archæans, drop-dead like generic terrorists. They come in several tiers, more advanced ones requiring more lead, of course. Your operators mostly come from the Rainbow Six Siege roster and work pretty much the same. Each has a default weapon and gadget that define their combat utility, but they also accumulate XP and level up, expanding their arsenal.

Rainbow Six Extraction consists of two main parts – leveling up missions and endgame challenges. The first is the collection of missions in fixed environments, with procedurally generated threats depending on the difficulty tier. That means maps will always be the same, but the enemy’s disposition will vary. On the basic difficulty, you can expect entry-level mobs that you can dispatch quickly; Higher tiers add more enemies and potential mutations that work as buffs (for them, ofc), but the XP reward, upon completion, will be higher. Missions are further divided into three segments, each with its own objective, separated by safe houses. Each subsequent piece is harder than the previous one, but you and your team can always decide that enough is enough and call for extraction, forfeiting the reward for the current segment only.

Gamble or play it safe? 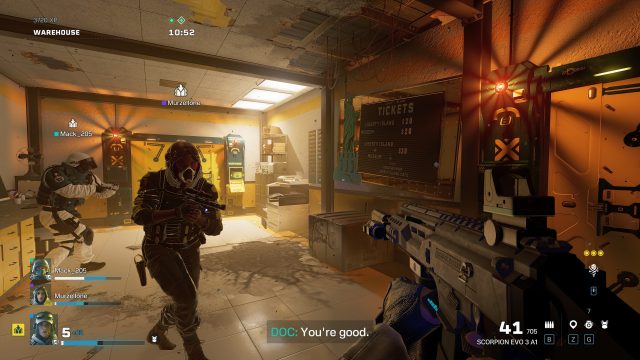 That is a gambling part of the game, and when all three people are on the same page, it works fine. If you play with randoms instead of friends, you can expect the problems generally associated with random people on the internet. Some will insist on pushing it no matter what, and that will, in most cases, result in a wipe. The catch is that there is a majority vote of sorts. If two people decide to go for the objective and one (you) wants to call for the evac chopper, the majority will win, and you will be screwed.

The vote is implicit rather than explicit – if you stubbornly stay alone on the evac spot, and the other two decide to open a safe house, you will automatically perish when the timer reaches zero. The second catch deals with the consequence of the wipe. Your operator will become MIA, and you will have to rescue it before using it again. 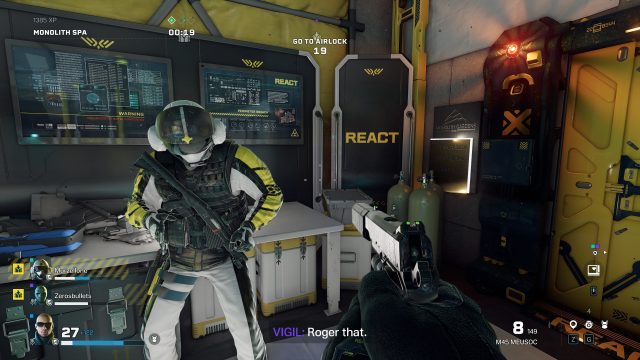 Well, you can always scream, flip the table and leave, right? Yes, but your operator will automatically go MIA, and you will suffer a five-minute matchmaking penalty. So yeah, If you get paired with morons, you will probably have to suffer them until the end. But what about soloing? Although you can play the game all by yourself, but it feels dull and generic that way. You will mostly resort to solo incursions when you wish to rescue your MIA operative, as the mission challenge scales down or up depending on the number of people. Saving the MIA operative playing with clumsy partners can easily backfire, and you may end up with another Missing in Action. The worst thing is that the game won’t even let you ragequit without consequence.

Rainbow Six Extraction is best when everything clicks. Playing with friends not shy on voice comms, executing coordinated tactics, and plowing through aliens like a hot knife thru butter. Even if they are more difficult when you bring the entire team, the mission objectives are much more engaging in co-op. 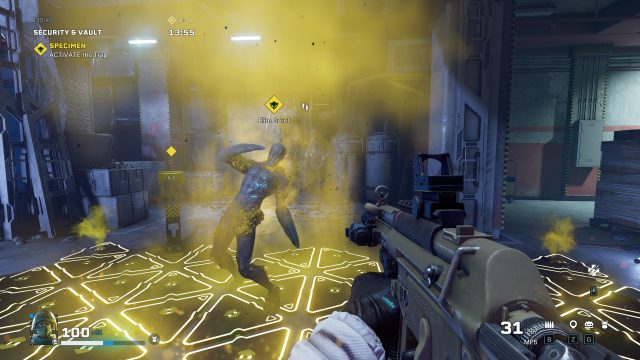 When you level up your operatives and reach level sixteen in the overall progress threshold, you will unlock The Maelstrom Protocol. This is the Rainbow Six Extraction endgame, and it is tailored towards advanced players looking to test their mettle. Maelstrom presents an ever-changing challenge each week, rotating permissible operators and introducing various difficulty modifiers, such as an increased number of mobs and a greater number of in-mission segments. The first one we had access to during the review week before the release had nine parts instead of three. Completing the Maelstrom awards your operators with various prestige headgear, signifying their achievements. Maelstrom, by all means, shouldn’t be attempted with randoms unless you are looking for new and fresh ways to experience a nervous breakdown.

Rainbow Six Extraction is a solid game, but it still feels incomplete in some regards. You need to grind towards the endgame, but there is no loot apart from the fixed weapon and gear unlocks. There is very little randomness during the regular game, even on the upper difficulty tiers. A coordinated team that communicates can master the game pretty quickly, working towards the endgame with half a brain and mechanical execution. The Maelstrom Protocol is very engaging, but you might not stay long enough to reach it and enjoy it.