Don’t know how to fix the Error Code 4-0xfff0be20 “Connection Failure” in R6 Siege? Released back in November of 2015, R6S is still by far the most successful and most popular Ubisoft’s competitive title. With over 60 playable Operators and many interesting maps, there’s a myriad of strategies and ways to play this tactical shooter. Also, that’s exactly the reason why the game still boasts a huge player base. Unfortunately, being an always-online game, it also means that sometimes some issues are bound to happen. One of the most often such problems is R6S Error 4-0xfff0be20. In this guide, we explain why are you encountering this error and offer a few solutions on how it can be fixed. 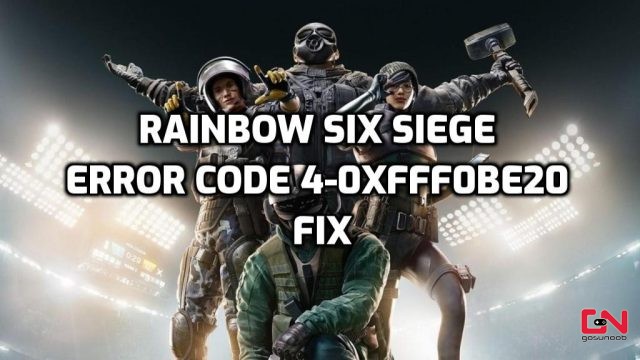 How to Fix Error Code 4-0xfff0be20 in Rainbow Six Siege

If you have been affected by disconnection issues and the 4-0xfff0be20 error in R6S, you should know that you are not alone. Over the last couple of months, a number of players have been reporting this issue. It seems that it often appears at random. Sometimes, players are unable to even load into R6 Siege and sometimes they can not find a match. Furthermore, in most severe cases, they are being disconnected while playing a ranked match. This is not only bad because it ends up in them losing that match. It is far worse, as they can get banned because of leaving a ranked match.

So, how can we fix Error Code 4-0xfff0be20? Given that this falls under connectivity issues in Rainbow Six: Siege, you should perform some troubleshooting steps in order to find or rule out potential causes. Here are a few things which you should do:

If after all these steps you are still experiencing R6S Error Code 4-0xfff0be20, then you should check the official Ubisoft support for R6S. Depending on your platform, please visit one of the following pages: PS4, PS5, Xbox One, Xbox Series X/S, or PC.