Like in all other Supermassive games, in The Quarry, it’s all about choices and consequences. Every step you take and decision you make can mean the difference between life and death for nine playable characters of The Quarry. One of the early choices you’ll have to make is if you will Help or Leave Max while you play as Laura, his girlfriend. What are the ramifications of both choices and how to save Max in The Quarry? Read on to find out. 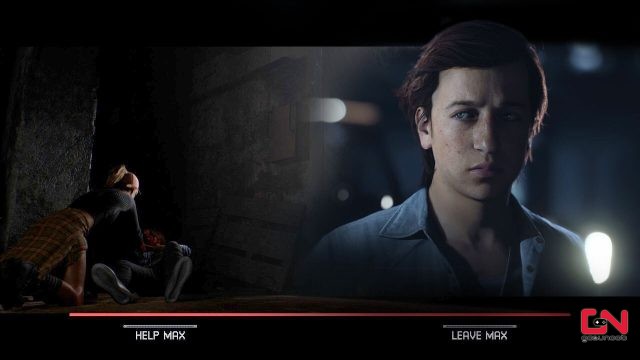 It goes without saying, but nevertheless – spoilers ahead! During the prologue, Max and Laura will eventually end up in a rather dire situation. After their car accident, they will meet Sheriff Travis and end up in Hackett’s Quarry storm shelter. As they explore the concrete labyrinths, Max will stay behind and end up attacked by a mysterious nimble creature. And this point, as you play as Laura, you will find yourself making the first hard decision – Help or Leave Max?The truth is, in terms of the immediate consequences, the choice here doesn’t matter. In both cases, Max will be dragged deeper into the bunker by the monster. However, you should still choose to help Max, as the game will remember your selfless and courageous decision. Following the unpleasant scene, sheriff Travis will appear. He will sedate you with a syringe and fire toward the bunker with his gun.

How to Save Max The Quarry

First thing first, before we proceed, a fair warning – The Quarry story spoilers ahead! If you don’t want to spoil the story, you’ll have to figure out on your own how to save Max. If you don’t care, then continue reading. We also should note that the story of The Quarry is very delicate, an intricate network of dozens of decisions and different paths you’ll make that will eventually decide the destiny of all characters.

When it comes to Max, he will survive the events described in the prologue. Max’s encounter with Chris Hackett in the bunker will turn him into a werewolf. From that point, shortly after he and Laura break up, Max will try to isolate himself as he doesn’t want to hurt anyone. In order to do that, he’ll lock himself away in the treehouse for the rest of the night. This will put him in a relatively safe position for the biggest part of the game.

Thus, the only life-threatening situation for Max comes much later in the game, during Chapter 10. That’s after Emma discovers him. This death can be caused by Werewolf Caleb, but only after basically all other characters died. The condition for this death is for Max to decide to swim to the shore immediately and meet Caleb. This will end up with Max’s throat getting ripped out. Thus, in order to save Max here, you will need to have Laura and Dylan alive as well!

NEXT POSTESO Tales of Tribute, How to Start & Rewards