Card games have been a popular mini-game in many video games for a long time. Some well-known examples of these include Gwent from The Witcher 3, Pazaak from KoTOR 1 and 2, Caravan from Fallout: New Vegas, and, of course, Hearthstone. In games that prominently feature them, they represent a fun little side activity that you can do to unwind and get some extra rewards. Now, with the release of its latest expansion pack, High Isle, the Elder Scrolls Online is also getting its very own card game. Called Tales of Tribute, we are going to show you how to start it and what rewards you can get by playing it in ESO. 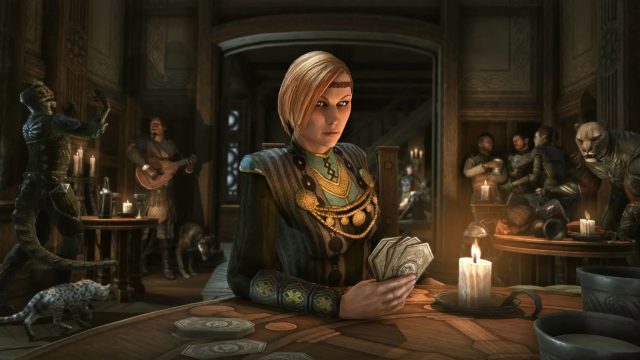 How to Start Tales of Tribute ESO

To be able to play Tales of Tribute in ESO, you will first need to, of course, purchase the High Isle expansion. If you don’t have this expansion, you can still find these decks and card upgrades, but you won’t be able to actually play the card game itself. After you have bought this expansion and installed the new content, the next thing to do here is to head on over to Gonfalon Gaming Hall. Here, in front of this fine establishment, you will find Bragas.

He is going to show you the basics of this card game through a short tutorial. After that, head upstairs. You need to defeat one of the novice players here. Once you have done that, you now have access to two daily quests that revolve around the Tales of Tribute card game. To get these daily quests, go downstairs and look for Kishka the Broker and Marunji the Broker.

By playing ESO’s Tales of Tribute against competing NPCs in taverns all over Tamriel, you can unlock many rewards. These include achievements, cosmetics, furnishings, gold, and crafting materials.